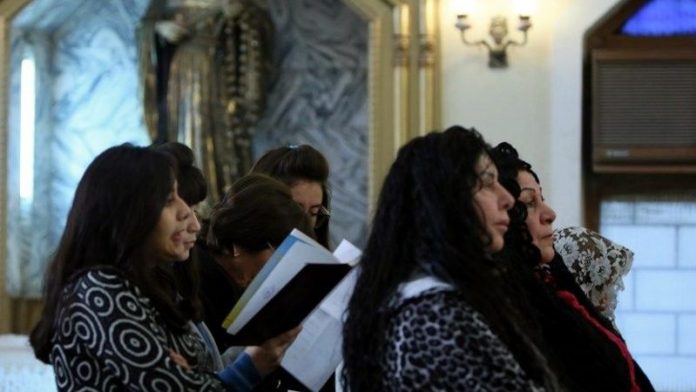 It's Christmas in Baghdad, and once again Iraq's Christians are celebrating behind blast walls and barbed wire.

At least 34 people died in bomb attacks in Christian areas on Wednesday, some by a car bomb near a church after a Christmas service. A church attack in 2010 killed dozens.

As prayers are offered and gifts handed out, many are wondering what a surge in violence to its worst levels in half a decade and politicking ahead of April elections means for a community whittled down by years of carnage and migration.

On Christmas Eve, the Mar Yousif Syriac Catholic church in western Baghdad looked like a walled fortress. Soldiers and police ran bomb detectors across cars, searched trunks and bags and patted down visitors before the evening ceremony.

But pews which would have overflowed with worshippers a few years ago were barely two-thirds full – a reflection of the fact that the Christian community has fallen from about 1.5-million before the US-led invasion to about half that.

"The future is very critical because of immigration," said human rights activist William Warda before Tuesday night's service, estimating 10 to 20 Christians were still leaving the country each day.

"Many Christians … are fleeing from the country because of this issue, because there is no sign of a bright future."

Tanks, pilgrims, and Santa Claus
While the situation is far from secure Warda pointed to some signs of at least cautious improvements in confidence at the Mar Yousif mass.

Organisers felt secure enough, for instance, to move mass to 8pm (5pm GMT) after holding it earlier in the day in previous years.

Warda said he hoped recent gestures by Prime Minister Nuri al-Maliki's Shi'ite-led government, such as making Christmas a national holiday for the first time this year, would encourage more Christians to stay.

Maliki, whose government has been criticised as sectarian and divisive, may have his own interests in mind as well.

Parliamentary elections are coming up next year and with car bombs, shootings and suicide attacks a more or less daily occurrence, security is certain to be on voters' minds.

There is plenty of evidence that authorities are eager to cast themselves as a national force of stability and security after over a decade of war and acrid political divisions.

Christmas Eve overlapped this year not only with the Shi'ite holy day of Arbain, but also with a major army offensive in desert areas of the Sunni-dominated western Anbar province aimed at flushing out al-Qaeda militants.

Throughout the day, images of tanks rolling through the desert alongside heavily-armed troops were interspersed on state television with pictures of Shi'ite pilgrims dressed in black and others of people in Santa Claus outfits.

A silhouetted soldier standing by an Iraqi flag and the words, "Amnana bikum" (You make us safe) flashed in the corner of the screen.

'They target you like they target us'
Christian leaders across the Arab world, alarmed by the rise of hardline Islamists in the wake of "Arab Spring" uprisings, have tried to emphasise their long histories in the region and have urged their communities not to leave.

"Immigration is not the solution," said Monsignor Pios Cacha, a priest at Mar Yousif.

"Leaving the country means wiping out our identity, it means the end of our presence here. And our presence as Christians is a symbol of peace."

In Iraq, the Christian minority shares some ground with majority Shi'ites in that both groups see themselves as victims of militants linked to al Qaeda who have stepped up attacks against Maliki's government and its supporters this year.

It was perhaps with these impressions in mind that Ammar al-Hakim, one of Iraq's most powerful Shi'itepoliticians, visited Mar Yousif's Christmas Eve mass.

Hakim, head of the Islamic Supreme Council of Iraq, a Shi'ite party that has sometimes allied with and sometimes opposed Maliki, rose after the sermon and spoke of tolerance, forgiveness and peace, saying Jesus Christ was an example.

Then he turned to al-Qaeda.

"They target you like they target us. There are people in this country who believe that anyone who has a different opinion should be killed," he said as a small army of burly bodyguards in suits fanned out through the church.

Although the microphone cut out halfway through his 15-minute speech, worshippers applauded when Hakim finished.

Outside, the dark, palm-lined streets were empty except for the soldiers, police and bodyguards standing guard. – Reuters