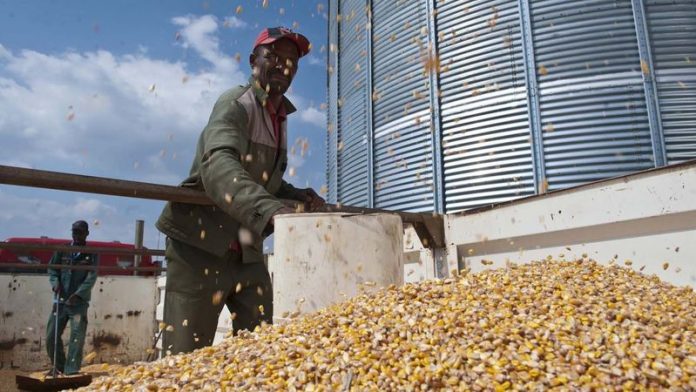 South African white maize rallied to the highest level in at least 17 years on concern that the nation, which is the continent’s biggest producer, will have insufficient supplies, according to BVG [a company of brokers specialising in trading agricultural futures and options on the South African Futures Exchange].

The contract for March delivery surged by the R80 limit, climbing 2.8% to R2893 a metric ton by the noon close on the South African Futures Exchange in Johannesburg. That’s the highest level since at least August 1996, when Bloomberg started compiling the data. Prices climbed 32% last year.

South Africa’s harvest of the white variety was the smallest since 2007 last year, dropping 20% from 2012, after the country’s main growing regions didn’t receive sufficient rain for crops to grow during the planting period, the Crop Estimates Committee said in November. Grain SA, the biggest representative of commercial farmers in the nation, on November 29 said white maize may surge as much as 27% if the drought-stricken North West province doesn’t get more rain to enable farmers to plant.

"South Africa will basically be running out of maize by end-March," Brink van Wyk, a trader at Pretoria-based BVG, said in an e-mailed response to questions. "Prices can easily go higher, depending on how difficult it is to secure stocks."

Planting season
The country’s farmers plant the crop in the summer months of October to December and reap their harvest from April to June. Meal made from white maize is one of the nation’s staple foods while the yellow variety is used as animal feed.

"Tightness in supply" is the main reason for the rise in prices, Andrew Fletcher, an independent trader in Kroonstad in the Free State province, said by phone. "We’re effectively going to an import parity price," he said, referring to the cost local customers would pay for buying the commodity outside the country and transporting it to the nation. Parity for maize from the US was R3 173 a ton on December 12, according to the South African Grain Information Service’s website.

The white-maize harvest declined to 5.5-million tons last year, the government’s Crop Estimates Committee said. The group releases its first forecast for 2014 output on February 27. The area farmers planted with yellow maize this season probably fell 4% to 1.55-million hectares from a year earlier, the committee said on October  24 – Bloomberg

Acolytes of the ex-president gear up take-back regions in Mpumalanga, KwaZulu-Natal and North West before the ANC mid-term meeting
Read more
National