Matric pass rate highest yet at 78.2% 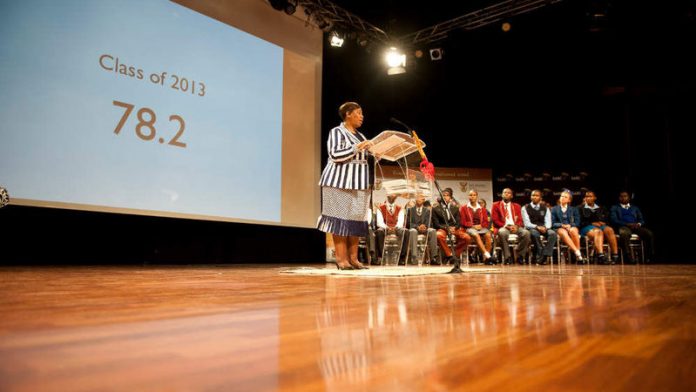 Minister of Basic Education Angie Motshekga made history in two ways on Monday when she announced the 78.2% pass rate of the 2013 matrics.

Firstly, this is the highest pass rate in the history of post-1994 education in South Africa after 2012's 73.9%. Secondly, the announcement was made against a backdrop of scepticism even before the results were released.

Out of the full time candidates, 439 779 passed, while 30.6% of these received university exemption.

In a surprise development, neither Gauteng nor the Western Cape occupied either of the top two positions that they've enjoyed for several years.

Instead, the top province was the Free State whose 87.4% this year propelled it to the number one spot, compared with its third position last year. The North West, which last year was in fourth position, jumped to number two with 87.2%.

This was followed by Gauteng with 87% and the Western Cape with 85.1%.

'Discouraging and disheartening'
Speaking before Motshekga, Deputy Minister Enver Surty obliquely referred to criticism widely published over the weekend and on Monday that the matric results are an unreliable indicator of the quality of the whole school system. He said it was "discouraging and disheartening when people", some "in academia", set about "denigrating" the "progress we have made away from mediocrity".

Motshekga briefly alluded to pre-release doubts about how reliably the pass rate measures the schooling system. She listed various high-performing districts, some in rural areas, and concluded that these figures gave a picture that is "contrary to what some would have us believe – [namely] that our results hide inequalities".

She said that "all indicators of quality are also part of the upward trend". Motshekga referred to the increase from 20.1% of pupils in 2008 who were granted permission to apply to study towards a bachelor degree to 30.6% in 2013.

She said that 78 407 pupils from the three poorest categories of schools "… quintile one, two and three … obtained admission to bachelor studies".

"Therefore it is evident that schools coming from poor communities are demonstrating good performance … The notion that the schools from the more elite communities are propping up the pass rate is therefore invalid."

Criticism
The pre-release caused an avalanche of criticism centred around what the matric results actually signify.

Some questioned the value of a matric certificate, saying it is almost worthless. They cautioned against jubilation about what they predicted would be an increase in the pass rate, arguing that passing matric did not mean pupils would succeed in tertiary education or be prepared to enter the job market.

Jonathan Jansen, vice-chancellor of the University of the Free State, said in a Sunday Times opinion piece that it did not matter what the pass rate was, because the results were "grossly misleading" anyway. He was scathing about the low passing standards, saying: "These pass rates are still calculated at a base of 30% in some subjects and 40% in others."

The deputy vice-chancellor of the University of Johannesburg, Tinyiko Maluleke, wrote in the Sunday Independent that the matric certificate was in "grave danger" of "meaninglessness, worthlessness and irrelevance".

He said most South African universities "take the matric results with a large pinch of salt … Why else would they be instituting, increasingly, compulsory enhancement programmes [at great expense] for new entrants into the higher education system?"

Maths literacy, commonly assumed to be the "easy" version of maths, was "worthless for science and mathematics careers", Basil Manuel, president of the Naptosa teachers union, told City Press.

He questioned whether South Africa would be able to meet "the country's future need for engineers, accountants, and entrepreneurs with the quality of our current school and examination system".