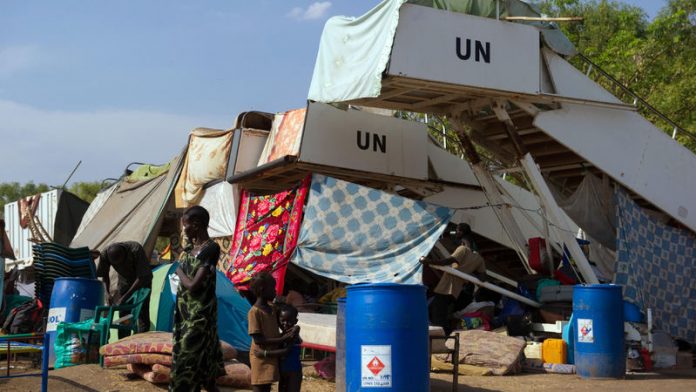 South Sudan's loyalist troops prepared for an offensive on Saturday on Bor, the last major town held by rebels, a day after recapturing the country's main oil hub, the city of Bentiu.

Meanwhile the United Nations urged President Salva Kiir to release detainees in a show of goodwill to kick-start stalled peace talks in Ethiopia.

Riek Machar, the sacked vice-president who took the helm of the rebellion that formed after rival army units clashed in mid-December, remained defiant after losing Bentiu on Friday.

"We withdrew from Bentiu, but it was to avoid fighting in the streets and save civilian lives," he told AFP by phone from an undisclosed location.

He vowed to defend the central town of Bor, which is the capital of the flashpoint state of Jonglei and lies around 200km north of South Sudan capital Juba.

"We fight on, we will continue the battle," he said.

A final blow
The government has said it was mobilising thousands of troops to deal a final blow to the rebellion.

Even as thousands of civilians continued to cross the White Nile to flee the fighting around Bor, loyalist soldiers crossed the river in the other direction to return to battle.

An AFP reporter in Minkammen, a town on the opposing shore of the river hosting thousands of displaced citizens, saw dozens of government soldiers boarding barges heading to the frontline near Bor.

A military spokesman for Machar insisted that while rebels had lost the town of Bentiu, the area's vital oil infrastructure was still in rebel hands.

Oil exports account for more than 90% of South Sudan's revenues. Output has dropped by at least 20% since the fighting broke out in Juba on December 15.

Victims of war
The UN has said that "substantially in excess" of 1 000 people have already been killed in the fighting, but the ICG think-tank estimated that the figure was likely closer to 10 000.

A quarter of a million people have been displaced as what started as a power struggle has morphed into a bitter civil conflict with ethnic overtones, pitting Kiir's majority Dinka tribe aginst Machar's Nuer community.

Top UN aid chief in South Sudan Toby Lanzer has warned of an "unfolding humanitarian catastrophe" ravaging the country, two and half years after its birth.

On Friday, UN chief Ban Ki-moon urged Kiir to accept Machar's demand that 11 of his aides jailed when the violence kicked off be released before peace talks can begin.

"I called President Salva Kiir yesterday again and urged him to demonstrate leadership and political flexibility by immediately releasing political prisoners," he said. "South Sudan is at a crossroads."

Prisoner release
The 15-nation Security Council demanded the release of the detainees to "create an environment conducive to a successful dialogue" between Kiir and his former vice-president, Machar.

Kiir's side has insisted the 11 must face legal proceedings.

Regional mediators in Addis Ababa, Ethiopia, said they remained optimistic that peace delegates from the two sides meeting in a luxury hotel in the city would agree to a ceasefire.

The United States, which was instrumental in helping South Sudan win independence from Khartoum in 2011, has said it feared the country risked imploding and urged the two sides to immediately agree to a truce.

Aid agencies seeking to assist the displaced and wounded are struggling.

Médecins Sans Frontières​ (Doctors Without Borders) said its facilities in Bentiu were looted and other aid organisations have reported similar incidents, including cars being stolen at gunpoint. – Sapa-AFP

Later this month, the UN Security Council will vote on whether to lift the arms embargo on South Sudan. Doing so would be a terrible mistake
Read more
Opinion

So far, most countries on the African continent are dealing with Covid-19, but not all leaders are taking the coronavirus pandemic seriously
Read more
Africa