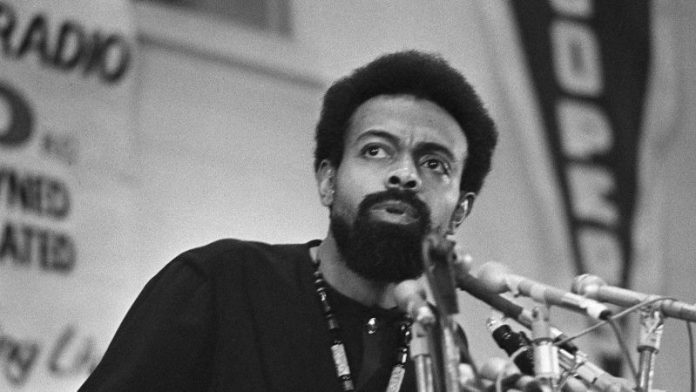 Amiri Baraka, who has died aged 79, was an African-American writer who chose separation rather than integration. In 1962, James Baldwin, the most prominent black author of the period, had asked, "Do I really want to be integrated into a burning house?" In the middle of the decade, Baraka, at the time still known by his birth name of LeRoi Jones, put the rhetoric into action and walked away from New York literary society.

By then a successful poet and playwright, with Beat generation affinities, Jones left his white wife and their two daughters, changed his name (he gave the meaning of Amiri Baraka as "blessed prince"), and moved from the downtown bohemian hangout of Greenwich Village to Harlem. There, he helped found the Black Arts repertory theatre on 130th Street (no whites allowed), which staged his own plays as well as work by those who, like him, believed in "a blacker art". As Jones, he had had success as both a poet and a playwright; as Baraka, his work became increasingly didactic and the activist in him took over from the writer. His first theatrical publication under his new name was Four Black Revolutionary Plays (1969).

Everett LeRoi Jones was born in Newark, New Jersey, into a milieu he described as "black bourgeoisie". He attended Howard, Rutgers and Columbia universities, without graduating, but his realisation that literature was the medium that might grant him a vocation came during his service in the US air force (1954 to 1957). "Something dawned on me, like a big light bulb over my noggin," he wrote in The Autobiography of LeRoi Jones (1984), describing his sudden passion for Joyce and Dostoevsky. "All kinds of new connections yammered in my head." Less predictable was his love of Evelyn Waugh. "I read every novel of his I could find. I thought Sebastian Flyte was marvellous," he told the Guardian in 2007.

On leaving the air force, Baraka headed for Greenwich Village, and began working in the music shop Record Changer, which fuelled his enthusiasm for jazz and blues. He built friendships on the hip literary scene, centred on the monthly Evergreen Review and its publisher Grove Press, which brought out Jones's first full-length collection, The Dead Lecturer (1964). Jones founded his own little magazines, Yugen and Floating Bear, as well as Totem Press, which issued pamphlets of poetry and prose by Beat and Black Mountain writers, including Jack Kerouac, Charles Olson and Gary Snyder. Totem issued Jones's first pamphlet, Preface to a Twenty Volume Suicide Note (1961).

In 1958, Jones married Hettie Cohen, whom he had met at Record Changer and who worked at the leftwing journal Partisan Review. Her parents temporarily cut her off as a result. The couple had two daughters, Lisa and Kellie (the former now a writer herself, the latter a professor at Columbia). Among the Joneses' circle of friends were the poets Allen Ginsberg, Edward Dorn and Frank O'Hara. In 1964, Jones's play Dutchman was staged at the Cherry Lane theatre in Greenwich Village. The action takes place in the carriage of a New York subway train, in which a white woman and a black man flirt with one another, leading to unexpected violence. It won an Obie award for the best off-Broadway play. Forty-four years later, it was successfully revived at the same theatre.

Antisemitic
Throughout his career, Jones/Baraka was highly productive and quick to switch allegiance, as his change of name and the circumstances of his marriage suggest. Not only did he walk out on his Jewish wife, but he wrote some notorious antisemitic poems ("I got the extermination blues, jewboys / I got the Hitler syndrome figured"). He spoke and wrote disparagingly of "queens" at a time when his best friends included O'Hara and Ginsberg, both openly gay.

Later, in an article published in the Village Voice ("Confessions of a Former Anti-Semite", 1980), he repudiated those former positions, and elsewhere repented certain misogynistic pronouncements. Those who knew him through his statements in the press, or who witnessed his noisy interventions at public gatherings, were apt to regard Baraka as a rabble-rouser. In private, though, he could be warm and funny. He believed his own best quality was "tremendous energy"; his worst, to act and speak without responsibility.

Baraka is possibly the only modern American poet to have landed in prison on account of a poem. Following his arrest on a charge of possessing illegal firearms during the 1967 riots in Newark (characterised by Baraka as "the rebellion"), he was beaten and held in solitary confinement. During his trial, the judge read out one of his inflammatory prose poems ("All the stores will open if you will say the magic words. The magic words are: Up against the wall mother fucker this is a stick up") and sentenced him to three years in prison, which was, however, overturned on appeal.

In 1979, he was arrested during a quarrel in a Manhattan street with his wife, charged with assault and resisting arrest, beaten again – in both cases by a black police officer, as he was quick to point out – and sentenced to serve 48 consecutive weekends in the Harlem Correctional Facility. It was there – "in a room with a desk, a bed and a shower, a closet full of paper and a little portable" – that he wrote The Autobiography of LeRoi Jones (under the authorship of Amiri Baraka). "I call it my Harlem literary fellowship," he quipped later, adding: "It was gruelling, nevertheless, looking toward that each week." The Autobiography is regarded by many as his best book, giving a good showing to his wit and intelligence, in among the usual fist-shaking.

In later years, Baraka toured international festivals, often reciting poems to musical accompaniment. Having pointed out that while the best jazz musicians were black, the critics were usually white, he published several books on music, notably Blues People (1963) and Black Music (1968), in which he attempted to make sense of the quintessential African-American art form. "Blues could not exist if the African captives had not become American captives," he wrote in Blues People. In a review of the book, Ralph Ellison pointed out that the author tended to ignore the aesthetic aspects of the music. "He appears to be attracted to the blues for what he believes they tell us of the sociology of Negro American identity." Ellison felt that Jones (as he then still was) would like to set aside his pen and "pick up a club".

'Somebody Blew Up America'
After his change of name in 1967 and his marriage in a Yoruba ceremony to Sylvia Robinson (who took the name Amina), Baraka returned to his home town of Newark, where he remained for the rest of his life. He and Amina – also a performer of her own work – made their home into a community centre, the Spirit House, where readings and musical recitals were given, and theatrical performances tried out.

It was while acting as poet laureate of New Jersey that Baraka wrote his poem about the attacks of September 11 2001, Somebody Blew Up America, based on the suggestion that information about the forthcoming assault was known in government circles: "Who knew the World Trade Center was gonna get bombed / Who told 4 000 Israeli workers at the Twin Towers / To stay home that day / Why did Sharon stay away?" Accusations of antisemitism flew at once, and the governor of New Jersey, James McGreevey, demanded that he resign as poet laureate. When Baraka refused, the governor abolished the post.

Baraka received awards including a Guggenheim fellowship (1965), and taught at various universities. He made peace with many of his old adversaries, including Baldwin, about whom he had written in his book of essays, Home (1966), that if he "were turned white, there would be no more noise" from him. In a late interview, he appeared to have stepped back some distance from his separatist position. "As Baldwin used to say, there's no black people and no white people. You can't be an American without being related." His anger, however, based on the balance of power, remained undimmed.

He is survived by Amina and their five children; by Lisa and Kellie; and another daughter, Dominique, from a liaison with the poet Diane Di Prima.

The bleak shelter of Yellow Shade

Tonight we are not going to sleep: Extracts from ‘a naked bone’ by Mangaliso Buzani