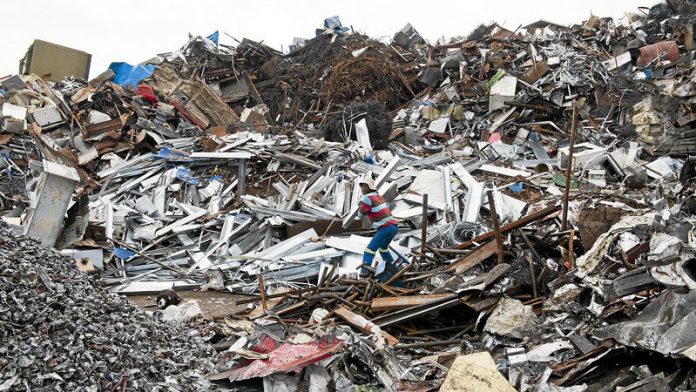 Restrictions on the export of waste and scrap metal, which require dealers first to offer scrap to local consumers at a 20% discount before being granted an export permit, have caused unhappiness among dealers and consumers.

The restrictions have done little to bring down the price of input costs for buyers — foundries, mills and secondary scrap processors — while tonnes of waste metals pile up in scrapyards across the country.

Abeddac Metals is one such scrap yard spilling over with waste. Trucks line the street in an industrial suburb of Boksburg as waste goods are continually delivered.

Company director Benjy Jassinowsky said his floor has never been so full — and that is not a good thing.

On a normal day, seven or eight containers of scrap will leave Abeddac bound for the coast for export, but since restrictions on exports have come into effect almost nothing has left the crammed yard, Jassinowsky said.

Many scrap merchants, like Abeddac, claim their businesses have come to a virtual standstill.

The gazetted guidelines stipulate that "scrap metal will be allowed to be exported only if the scrap metal concerned was offered to domestic consumers at a price that is 20% below international spot prices for the published types and grades of scrap metal".

According to the International Trade Administration Commission of South Africa (Itac), export permit applications for the exportation of controlled waste and scrap metals are circulated to industry twice weekly, and local buyers have 15 days to make an offer to purchase the relevant scrap metal. If it is not bought, then Itac will issue an export permit within three days.

"At the moment everybody is unhappy with the current system. It's not working — bottom line," said John Davies, chief executive of the South African Institute of Foundrymen.

Scrap dealers like Jassinowsky who have struggled to reach agreements with local buyers claim to have faced longer waiting periods for export permits, especially because of the December break.

Bernard Maguire, a Metal Recyclers Association of South Africa (MRA) executive member, said some permits have been rejected for "silly reasons" such as wording or a new application form that many suppliers were not aware of.

Angelo Solimene, chief executive of Group Wreck International Non-ferrous, said some local buyers are just objecting to applications for the sake of objecting.

"They will object to my permit, [but] they don't give me payment terms. And they don't come and collect … I will only supply someone if I know who they are and they pay me on time."

Solimene said this means his company, located 7km from the Durban harbour, may have to transport loads up to Johannesburg or further.

As a result of the inability to reach an agreement with local buyers, Solimene said receiving export permits has been slow.

"We are just waiting. Yesterday I had to sell my material at R4 cheaper [a kilogram] to my opposition because he got a permit."

"The problem is the scrap metal merchants blatantly refuse to sell at the preferential price or anywhere near the preferential price. You are forced to pay whatever [they] want to sell it for," said Bob Stone, chairperson of the Non-ferrous Metals Industry Association, who is also vice-chair of the Aluminium Federation of South Africa.

"All of the scrap metal merchants are not applying the policy — have they all colluded to not abide by it?"

He said that although, technically, a consumer should be able to purchase at the listed preferential price outlined by the government, "to my knowledge there is not one kilogram of any metal that has been sold by any scrap metal merchant at that price".

Stone said some merchants are applying for export permits using 20 different addresses, with very small quantities at each address.

This, according to Davies, makes matters of inspection and transportation more difficult.

Negotiations further complicated
Dealers, however, argue it is not worth the time and expense to move the goods without knowing whether a deal will be struck or not.

Davies said negotiations are being further complicated by some of the scrap metal merchants wanting local buyers to provide a copy of three years' worth of financials, surety signed by all of the directors or a confirmed letter that the price offered is the same as that offered to all merchants.

Jassinowsky, whose company trades in nonferrous metals, said the pricing system is anti-competitive and inhibits free trade. "Why should I be forced to sell at a loss? I'd rather close the business down."

But Stone questioned how scrap metal merchants not abiding by or applying new policy can claim it is detrimental when they have not even tried to follow the guidelines. He said dealers stand to benefit the most from the new system.

"If the merchant sells at the preferential price, that means he has to buy at a cheaper price. But he only exports half of what he buys. He is then earning a hell of a lot more, because he bought it cheaper."

Those losing out, he said, are the generators of the scrap. Donovan Korff, a partner at Cobra Metals, a small-scale scrap dealer in Johannesburg that sells to Abbedac, said revenue has halved as a result of the new restrictions.

"No delay" in processing applications
"Those supplying to the companies who are getting permits, they are offering more for copper than we can offer for it. We can't even buy that much because we don't know what we are going to do with it yet."

Marius Collins, Itac's manager of import and export control, said there is "no delay" and "no backlog" in processing applications.

"Given that this is a new and additional responsibility, Itac hired extra administrative staff for its import and export control unit, which currently administers the system," said Collins.

Davies said: "I'm disappointed because at the same time [that the restrictions were drawn up] we were in discussions with Busa [Business Unity South Africa] and the MRA to find a solution; we were virtually at the stage where we had completed the investigation and had proposals ready to be tabled."

A legal bid to have the new policy changed was lodged by the MRA last year. The first part of its application was lost while the second is scheduled for March. The SA Metal Group has also launched a court challenge.