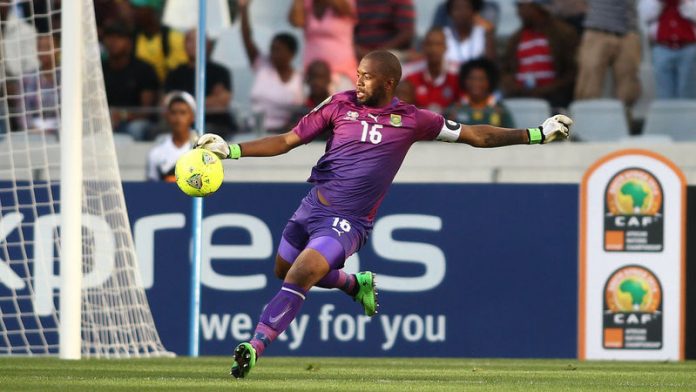 With his team's survival in the African Nations Championship hanging in the balance, coach Gordon Igesund was dealt a serious blow with the news that Bafana Bafana will be without goalkeeper Itumeleng Khune for their final group A game against Nigeria on Sunday. Khune suffered an ankle injury in Bafana's 1-1 draw with Mali in Cape Town on Wednesday.

"His health is more important and the doctor told me [on Friday] that it'll take four or five days for him to recover, it's only been three now," Igesund said. "He's still feeling a bit tender and a bit sore. The risk is too high. Hopefully we still have a quarterfinal, a semi-final and a final to get to … If we do get there, I need to have Khune there and competing. He's out for the game."

With the first-choice shot-stopper ruled out, Igesund said he would be looking to start Moeneeb Josephs. Josephs last played for the national side in September 2013, in Igesund's second game in charge against Mozambique, which Bafana won comfortably.

"I'm going to speak to my goalkeeping coach, I always consult with my coaches … At this stage, it looks like it will be Moeneeb. He's looked quite sharp in training."

Igesund confirmed that Bloemfontein Celtic defender Thabo Nthethe would lead the team out against the Super Eagles, in the absence of Khune.

Top of the group
With a win and a draw in the bag, South Africa top their group thanks to a superior goal-difference, but have left it late to book their spot in the next round.

Bafana opened their campaign with a dominant 3-1 win over Mozambique last Saturday.

Wednesday's stalemate against Mali means Bafana must avoid defeat, with a draw enough to see them safely through to the next round, while a victory would keep them in contention to qualify as winners of the group.

"We know what's at stake, we know that we have to go and do it and we'll go out there and play the game the way we normally play it," Igesund said.

"Games between South Africa and Nigeria are always interesting games. Nigeria have done fantastically well under Stephen [Keshi], he's a great coach … I won't play for a draw, I'll play for a win."

Igesund confident
Mali take on Mozambique in the other group A encounter, played simultaneously at the Athlone Stadium, and they look unlikely to be troubled by their southern African counterparts, who have already been disqualified from the tournament and have little to play for.

"It's going to be a very tough game but I'm confident that we'll go on from here," Igesund said. "I believe that we're getting better, there's more confidence in the team … I'm very happy with the squad that we've got. There are a couple of good young players coming through."

Meanwhile, Nigeria will be knocked out of the tournament if they lose to Bafana, but could still qualify with a draw, should Mozambique cause a major upset by beating Mali.

The permutations, however, look far simpler for the Nigerians, who know they will be heading home if Igesund's troops beat them, making them a dangerous opponent to face in the final game of the group. – Sapa