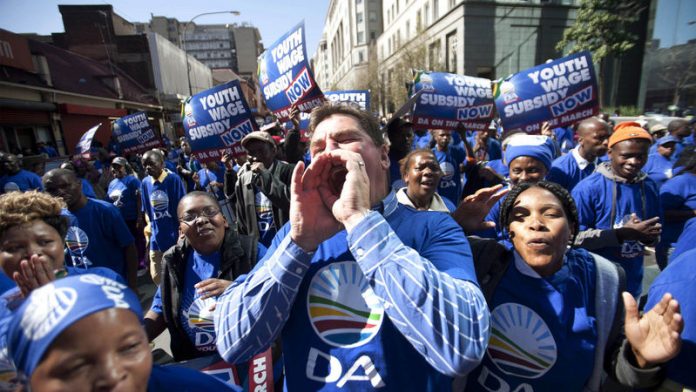 Lawyers for the DA on Sunday challenged the police decision to deny the party permission to march to the ANC headquarters.

Democratic Alliance federal council chairman James Selfe said the party's lawyers had approached the Johannesburg Magistrate's Court to appeal against the decision made in terms of the Regulation of Gatherings Act.

Johannesburg metro police spokesman Chief Superintendent Wayne Minnaar said: "The protest march by the DA… has been prohibited on the grounds that there would be a security risk to protesters."

The opposition party had intended to march to the African National Congress's headquarters, Luthuli House, in the Johannesburg CBD on Tuesday as part of its "fight for jobs".

Selfe said the court application got underway at 10am on Sunday.

"It was postponed to 1pm to give the police the opportunity to file an opposing affidavit."

Depending on the magistrate's ruling, the party would decide whether to take the matter on review to the High Court.

Selfe said the constitutional rights to freedom of assembly and expression were at stake.

Open to discussions
ANC spokesperson Jackson Mthembu said in a statement on Sunday that the decision to prevent the march "confirms our long-held view that the DA's intended invasion of Luthuli House was ill-advised, ill-informed and risky.

"We would have welcomed the opportunity to educate the DA that successive ANC governments have turned around a collapsing and nearly bankrupt economy in 1994 into a thriving one with growth rates averaging 3.6 percent annually consistently over the last two decades."

He said the ANC remained willing to engage with society, including the DA, on the issues covered in the ANC election manifesto.

"Such an engagement may indeed prove fruitful to the DA in order to mask their lack of clear policy positions on the economy and other areas of socio-economic endeavour," Mthembu said.

Previously he warned the DA not to provoke the ruling party.

Flash from the past
He warned the DA about what happened when it marched to the Congress of SA Trade Unions' office two years ago.

Cosatu members threw stones at DA supporters as they made their way to the lawns of the Joburg (formerly the Civic) Theatre, 50 metres from the trade union federation's office.

Riot police were called and teargas and water cannons were used.

Mthembu said the ANC did not want to be put in the same situation and called on the DA to reconsider the march. –Sapa