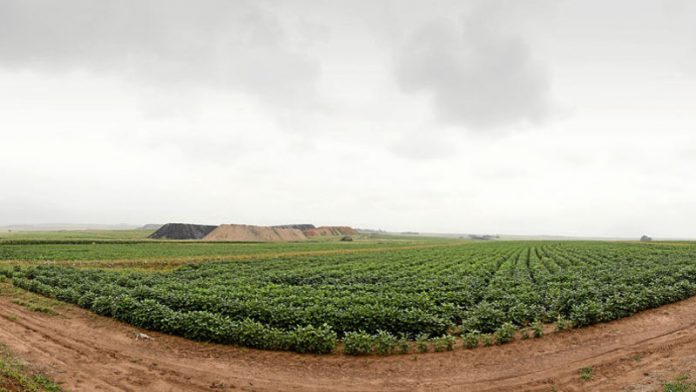 The modern story of Mpumalanga is of the war between farming and mining. Its rich soil, crisscrossed by streams and rivers, is one of South Africa's breadbaskets. Exports from here go around the world.

But beneath the green grass and red soil are deep deposits of coal. These feed the power stations that dot the province and power the economy.

Down a rutted and potholed tar road crushed down by the constant procession of coal-laden trucks, the Brakfontein Colliery is causing problems for farmers around the small town of Delmas, 60km east of Johannesburg. The mine is run by a company with links to the politically connected Gupta family, which also runs the company that owns the land being mined.

The first thing local farmers mention is the Guptas, before constantly reiterating that they cannot speak on the record. They do not want to become known as "troublemakers".

One of them, pausing to cough deeply as he talks, says: "You can smell the coal when it burns, and in the evening it looks like an oven."

Smoke and fire
By day, the black piles of coal intermittently emit smoke. Unlike the neighbouring mines – there are mines in every direction, creating small mountains of grey rock and brown sand – this one does not have trucks coming and going. Everything is quiet. A small, wooden hut with a boom and a guard prevent entry.

The mine is on a slope, with fields of mealies on two sides and "Dis mos mielies [Now that's mealies]" signs indicating that this is farming country.

The third side, at the bottom of the mine, has a wetland, green and muddy from the heavy rains the area has had. The fourth side hosts the rutted dirt road that passes the mine, and the Wilge River.

The wetland drains into this river, and locals say when it rains the water mixes with coal in the mine – the result is that this polluted water flows into the wetland and the river. The Wilge flows into the province's most important river, the Olifants.

This is a recurring problem in Mpumalanga. Its rivers provide irrigation for farms and water for communities. When it goes wrong – as in Carolina where acid mine water left people sick and without water – the impact is widespread.

Global consequences
The European Union has given a final warning that it will stop imports from crops irrigated with water from the Olifants because of the level of health-threatening pollutants from mines seeping into the river.

The Brakfontein mine admits in its July 2013 scoping report, which it compiled to ask the department of mineral resources to allow it to expand its operations, that its operations are illegal.

It is relying on the 24G provision in the National Environmental Management Act, which allows companies to ask the department of environment affairs to give them retrospective permission for activities they began without the required permits.

During a public meeting in Delmas last year, the mine said it intended to submit a 24G application because "various listed activities have commenced" while "the necessary environmental authorisations under the Act are not in place".

Sputnik Ratau, spokesperson for the department of water affairs, says a notice of intention to issue a directive was issued to the mine for "failing to take reasonable measures to prevent pollution and for using water without authorisation". The mine had responded and water affairs was deciding what to do next, he says.

Eskom supplier
The scoping report says that "about 46%" of the coal will go to Eskom for power supply – the stacks at Kendal, the world's largest operating coal power station, are visible in the distance – with the export grade being sent to Richmond in KwaZulu-Natal.

But locals say the mine stopped selling coal in November. The mountain of coal has been building up. It caught fire early last month and has been burning ever since.

Three weeks ago, workers from the mine tried to stop the fire by dumping the burning coal on one side. This happened to be on Johannes Potgieter's mealie crops. He says he has been compensated.

Another farmer says they tried negotiating but were forced to turn to the minerals department because Brakfontein was unresponsive. The other mines, they say, respond quickly and fix their problems.

"But these okes are difficult," one of the farmers says.

The mining department did not respond to questions in time, citing the Mining Indaba as taking up too much of its attention.

Compensation
Normally a mine operates on people's land and compensates them.

In this case, the scoping report says the land is owned by a company called Confident Concept. It says the applicant and mineral rights holder is Tegeta Resources and Exploration.

Ravindra Nath is the company's chief executive. His LinkedIn profile shows that he was the chief financial officer at Sahara Computers until 2010. This is a Gupta-owned company.

Records at the companies and intellectual property registration office show that he started as a Tegeta director when it was registered in 2007. One of Tegeta's other three directors, Ashu Chawla, is a director of Sahara Systems, another Gupta firm.

Nath is also the director of Idwala Coal outside eMalahleni. Last year it was accused of environmental damage and applied for the 24G provision.

Non-compliance
Idwala is about 50km from Brakfontein. The Sunday Times reported that the mine admitted in its application that it had diverted a public road and a river, and had mined without a water licence.

Despite earlier complaints and warnings of action from the department of water affairs, the newspaper reported, nothing had happened to the mine for more than two years.

Nath says that the mine has all the required authorisations for operations at Brakfontein.

"The environment is okay at our mine. It has been inspected. There is no requirement for a 24G [permission to allow activities that have begun without authorisation retrospectively]."

The water affairs department was satisfied with the mine, he says.

He is not aware of any complaints by farmers, and says coal fires are a common phenomenon because of a chemical reaction when it rains in summer. The land is being leased from Confident Concept, he says.

Gupta directors
Confident Concept comes up as two companies at the companies registration office. The directors of these are all Guptas: Atul, Chetali, Rajesh, Arti and Varun.

Until now, directors of companies were not liable for environmental damage. But a court decision in Limpopo on January 30 has set a precedent that changes this.

Matome Maponya, the director of a clay-mining company outside Tzaneen, was given a suspended five-year sentence on condition that his company rehabilitate the damage it had caused to the environment. If this was not done to the court's satisfaction within three months, the sentence would kick in.

Future farming
Whatever happens in Brakfontein in the short term, it is the future that worries the farmers. One of them uses his hands to make a circle in the air to illustrate his point.

"If you dig a mine you destroy all this area. For 10 years [the lifespan of the Brakfontein mine] you have money. But even if you rehabilitate it, that ground will never grow anything again. It is dead."

He is worried that the whole province is being destroyed this way.

"If you plant crops you have mealies for 200 years and more."

But he says it is the quick buck that triumphs because "people want money".

The Gupta family spokesperson, Gary Naidoo, had not responded to requests for comment by the time of going to press.