Thandile Sunduza – the woman in yellow who got dissed at Sona 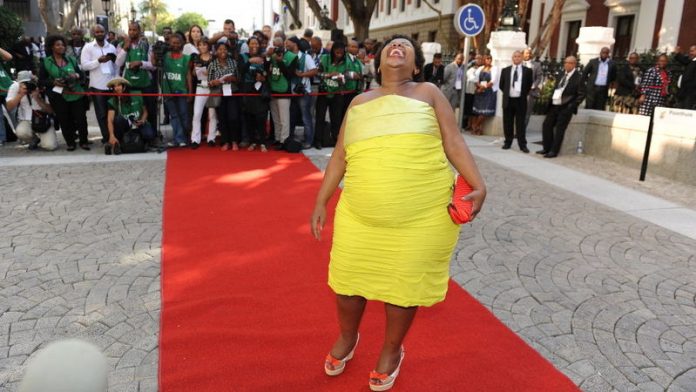 She has an engaging smile and lively eyes that seem constantly lit up with mirth. When she bounced on to the red carpet before the state of the nation address on Thursday night, her friendliness was the first thing I noted about her. Then the fact that she was pregnant.

The arts and culture portfolio committee chairperson treated journalists roped off from the red carpet at Parliament like old friends. "Don't ask who the baby daddy is!" she exclaimed, while telling us she was seven months pregnant.

Then she bounded off again and that was the last I saw of her.

Until her photo started popping up again and again on Twitter, Instagram and other networks. "Fashion fail!" exclaimed one person. "What not to wear," said another respected journalist.

I looked closely and conceded that her choice of dress was not the best by high fashion's standards. The ruched yellow satin dress did not outline her curves in the most flattering way, and the boob tube top part of the dress seemed badly fitted to her bust.

Crazy outfit
But I had honestly not even noticed her dress when Sunduza made her appearance earlier that day. Her personality shone too brightly and if anything, the bright dress seemed an extension of that. In person, she seemed to carry off the outfit, crazy as it was with a red clutch bag and platform heels. In unforgiving mobile photographs that rapidly began proliferating the story was entirely different. The angle was designed to disgust, as was her expression.

Accordingly a stream of vitriol started coming her way.

At first it was innocent, with people good-naturedly taking on her designer for making her look bad and recalling her previous outfit bombs on the red carpet at State of the Nation. But it soon turned nasty. "Lmao that body. Really. How does anyone justify being that shape," asked one instagram user.

Then the memes started. Search the #SONA tag on Instagram and you'll see some of them. Photos of Sunduza were juxtaposed along pictures of large yellow objects: a round lemon, an awkward duck, a fat cartoon caterpillar. It was mostly disgusting.

Having met the woman, I didn't see the humour. I saw an extension of a culture in South Africa that treats our female politicians not unlike how we generally treat our woman: as objects or as failures if they don't match one of many unattainable ideals we would not think to force on a man. I'm sure Sunduza has made her mistakes in life. A quick Google search will tell you of a brush with Metro police. But do any of these warrant an attack on her body?

'Triplets'
The fact that Sunduza was pregnant made the comments especially problematic for me. I initially thought the insults were aimed at her being overweight – which itself isn't justified. I tried to spare commenters the shame of having insulted a pregnant woman's body by tactfully informing them of her situation. The scorn grew ever bigger.

"[Pregnant] with what?" asked one person, which got several retweets.

"She got triplets. One in the front and two behind," said another.

"Note opening at top of dress," replied one particularly delightful individual. "This is used as an ashtray by passerby smokers."

Perhaps I'm old-fashioned but I thought the task of bringing a human being into this world was something to be admired. But instead there is a new way we look at pregnancies these days: as a competition.

"Did she lose the baby weight?"

"OMG, did you see how she's let herself go after her pregnancy?"

"What the hell is she wearing!"

Kim Kardashian
It's a schadenfreude that was displayed on a global scale during vacuous celebrity Kim Kardashian's pregnancy. Kardashian has built her brand on her body and style so perhaps the scrutiny was part of the package of her fame. It still struck me as a wrong somehow but I could understand how someone would defend it.

Sunduza was different. The growing critique of her outfit and more importantly her body strikes me as grossly unfair, and a small indication of how women and men in this country are perpetuating a culture that constantly puts women on the back foot.

Six times Malema dished it out during his parliamentary speech