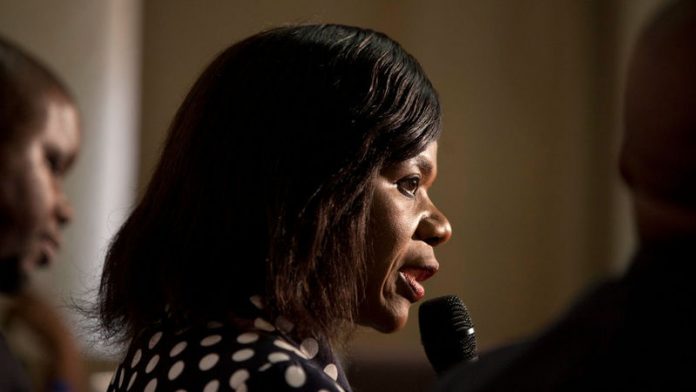 "We'll consider it and, if necessary, refer it to our lawyers as soon as we get it," spokesperson Siyabulela Qoza said in a statement. He said it was the SABC board that mainly needed to act on the public protector's findings, and the ministry would talk to the public broadcaster about it.

On Monday, public protector Thuli Madonsela criticised Motsoeneng and the SABC board over his irregular appointment and salary progression at the SABC.

Madonsela found former communications minister Dina Pule had interfered unduly in the SABC's affairs during her tenure. "Her conduct amounts to abuse of power," Madonsela said.

She called on Carrim to establish why group chief executive officers at the SABC could not function, and left prematurely, causing financial and operational strains.

We have just received the report today," he said in Johannesburg. "The board needs to study the report, then we can communicate later what will happen because we only received it today like everyone else."

Motsoeneng was also investigated for fraudulently misrepresenting his qualifications to the SABC, including claiming that he had passed matric when he applied for employment.

Madonsela said allegations that Motsoeneng committed fraud by stating that he had completed matric at Metsimantsho High School in QwaQwa were substantiated. She said it was worrying that Motsoeneng's file disappeared at the SABC while he denied falsifying his qualifications.

Madonsela's report recommends that the SABC board institute corrective action against the "dishonest" Motsoeneng.

Offended
Du Buisson said he was offended by the allegation by Madonsela, as he had not worked for the SABC in the past 14 years. "I am not employed by the SABC. I was employed there 14 years ago," he said.

"I am very offended by this statement by the public protector. That statement is tarnishing my reputation and name." Du Buisson, who is president of the Broadcasting, Electronic, Media and Allied Workers Union, said he had contacted Madonsela's office to demand an immediate correction.

The Democratic Alliance said the report confirmed that the SABC had been plagued by incompetence, corruption and cadre deployment for years, and called for Motsoeneng's immediate suspension.

"We call on Minister of Communications Mr Yunus Carrim, in his capacity as the shareholder's representative, to instruct the SABC board to immediately suspend Mr Motsoeneng and recruit, as soon as possible, suitably qualified and experienced group chief executive and COO to head a crisis management team to stop the rot at the SABC," spokesperson Marian Shinn said in a statement.

Motsoeneng should be removed from the premises and forbidden access to any SABC staff during the process of determining his possible permanent removal from the corporation, she said.

"He must also be forbidden to have contact with the SABC board, with whom he has an unhealthy close and protective relationship."

'Political clout'
"Mr Motsoeneng has an extensive record as an unscrupulous character within the broadcaster's administration. Mr Motsoeneng used his political clout to collapse the last SABC board when it voted to remove him from the acting COO post. And it is unlikely that any of the current board would be serving if they were not indebted or in league with Mr Motsoeneng.

"The public protector's picture of Mr Motsoeneng's character and behaviour clearly shows that his continued presence at the corporation will continue to have a destructive effect on operations and personnel."

The Congress of the People called on the SABC board to fire Motsoeneng by the end of business on Monday.

"The public protector's finding that Mr Motsoeneng's misrepresentation of his qualifications is improper and constitutes a dishonest act must be acted upon immediately," spokesperson Johann Abrie said in a statement.

"We urge the board to implement every single one of the recommendations without any delay and to restore integrity to the SABC." – Sapa