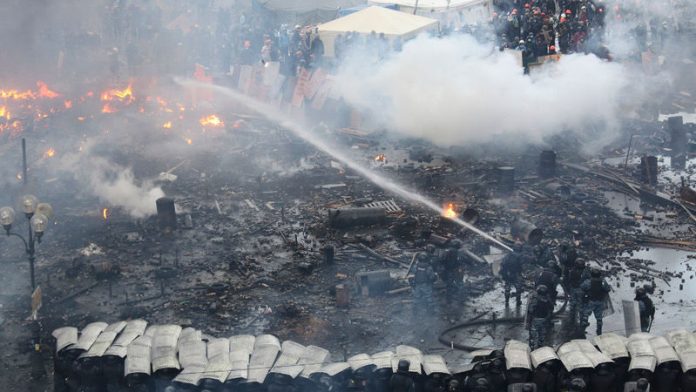 Hopes for a settlement of Ukraine's three-month crisis are evaporating amid scenes of rioting, burning buildings, police bombings and rubber bullets in Kiev that left up to nine protesters reported dead and more than 100 seriously injured.

The violence was some of the worst since a government-opposition confrontation erupted last November, and came after President Viktor Yanukovych, the main target of the protests, stalled on outlines of an agreement to appoint a new technocratic coalition government or to have his powers cutback.

Columns of riot police sought to banish crowds of protesters from encroaching on the country's parliament, while demonstrators also partially ransacked offices of Yanukovych's political party. The security services issued an ominous warning, ordering tens of thousands of protesters to get off the streets by Tuesday evening or face a crackdown.

"Extremists are killing innocents on the streets of the capital, burning buildings and cars," the statement said. "Unless the disorder stops, we will have to restore order by all means envisaged by law."

The foreign ministries of Ukraine and Russia issued what appeared to be coordinated statements blaming Europe for fomenting the unrest.

Kremlin
It appeared that the Kremlin had a hand in the political machinations behind Tuesday's eruption and the crackdown. As well as blaming Europe for the rioting, it offered $2-billion to Yanukovych and sought to influence the appointment of the new prime minister.

Women and children were being evacuated from the crucible of the protest, Independence Square, amid reports that riot police were firing smoke and stun grenades. Opposition sources also said police snipers were firing on demonstrators from rooftops.

Opposition organisers said seven civilians had been killed and around 150 injured, many seriously. The authorities said 37 police officers were injured.

"The violent clashes today have to date resulted in deaths by bullets and hundreds of injuries, including seven people in a critical position. Snipers posted on roofs are targeting the heads and chests of protesters," said a statement by protesters. "Ambulances blocked by security forces are not able to provide first aid to the injured," it continued.

The US ambassador, Geoffrey Pyatt, tweeted: "After weekend progress in Kiev, sorry to see renewed violence. Politics needs to happen in the Rada [Parliament], not on the street."

Mayhem
But if chaos and bloodshed reigned on the streets of central Kiev, there were also scenes of mayhem inside parliament, where opposition leaders sought to inaugurate moves curbing the powers of the president and making Ukraine more of a parliamentary than a presidential system.

The opposition tried to table a resolution returning the country to its 2004 constitution, which would have given Parliament the authority to appoint a new prime minister and cabinet and stripped Yanukovych of many of his powers.

The president's allies in Parliament simply blocked the move, refusing to have the resolution registered. Yanukovych orchestrated changes to the 2004 Constitution after taking power in 2010 and vesting most powers in his own office.

Earlier, several thousand nationalists led by the Svoboda [freedom] party converged on a park near the Parliament and tried to move on the legislature, only to be blocked by riot police who also closed down the city centre metro system.

The flare-up and the apparent readiness for a draconian crackdown followed several days of more optimistic signs that the crisis was ebbing and compromises were being reached.

Evacuation
Protesters evacuated several symbolic buildings they had been occupying for months, including Kiev city hall, which on Tuesday was set ablaze. In recent days, the authorities have also released more than 240 people detained during the unrest under an amnesty.

Yanukovych is to meet a trio of opposition leaders on Wednesday and is expected to propose a new prime minister.

The confrontation was sparked at the end of November when Yanukovych abruptly ditched years of negotiations with the European Union on a political and free trade pact, turning instead to Moscow for $15-billion-worth of cheap loans and discounted gas supplies.

The offer on Tuesday of a new $2-billion loan was seen as tied to Yanukovych making the "right" choice for new prime minister.

The swiftness of the Russian moves in seeking to outwit the EU in what rapidly snowballed into a contest for influence in Ukraine has exposed the lumbering nature of European diplomacy and policy-making in a crisis in a neighbouring state.

Force
The opposition leaders and protesters are seeking to unseat Yanukovych and force early presidential elections.

"I am addressing the Ukrainian president. He is the only person who can be held responsible for what is happening," Vitali Klitschko, an opposition leader and former heavyweight boxing champion, told parliament after returning from talks with Chancellor Angela Merkel of Germany in Berlin. "Call snap presidential and parliamentary elections. Do it. It's the only way to solve the issue," he added.

Protesters, some of them armed with air pistols and petrol bombs, hurled bricks and paving stones at ranks of riot police, who used rubber bullets, smoke and stun grenades. Many of the injuries were said to have been head wounds from being struck by grenades. – guardian.co.uk © Guardian News and Media 2014