Angola’s Ollivier: He sold cereals, then he sold peace

Rotund, energetic and with a rapid-fire delivery, Jean-Yves Ollivier (70) was all smiles as he was showered with praise and tributes at the 25th anniversary commemoration of the Brazzaville Protocol, which ended the Angolan war.

For his role in bringing about peace, Ollivier, a French former businessperson, now holds the distinction of having been honoured by the apartheid regime as well as the post-1994 democratic government in South Africa.

In 1987 he received the Order of Good Hope from then-foreign minister Pik Botha for having played a crucial role in securing the release of Captain Wynand du Toit, a South African soldier who was a prisoner of war in Angola. In 1995 he was elevated to the grade of Grand Officer of the Order of Good Hope by then- president Nelson Mandela for his role in ending apartheid. He is the only French, nongovernment individual who has so far received this distinction.

Ollivier received yet another honour last week, this time from the Republic of Congo government for helping to end the Angolan war.

"Well, somebody had to do it," he tells me, underplaying the immense amount of work he put into the process that set the Brazzaville Protocol ball rolling.

His life story – eloquently told in the documentary Plot for Peace, which was flighted on national TV in the Republic of Congo last week as part of the 25th anniversary celebrations of the Brazzaville Protocol – came as a revelation to many. Not only had Ollivier spent a large part of his working life in Africa, he had also been active for 40 years in mediation on the continent.

He played a facilitating role in the preparation and signing of the Brazzaville Protocol in December 1988, the first step towards bringing stability to relations between South Africa and its regional neighbours.

In the mid-1980s, Ollivier, a pint-sized, restless soul, was selling cereal in the Republic of Congo when it occurred to him that the environment he was operating in was far from ideal: "I was doing business in a troubled region. I realised that this was not sustainable, that something had to give; something had to be done to bring about stability in the region if proper business and development were to happen here."

His first foray into diplomacy happened after Du Toit, the leader of a "recce" (reconnaissance) team, had been captured by Angolan troops while on his way to bomb Angolan government oil installations. Du Toit's arrest became international news.

Before this, Ollivier was working behind the scenes on a more ambitious project. During the summer of 1986, he and the French president's counsellor for African affairs, Jean-Christophe Mitterrand, organised a meeting in the Kalahari desert between senior South African, Mozambican and Angolan representatives to lay the foundation for talks that would end the war.

On September 10 1986, Cuban president Fidel Castro, who had sent about 50 000 troops to Angola, undertook to withdraw his soldiers from Angola on condition that South Africa relinquish control of South West Africa (now Namibia).

In 1987 Angolan rebel group Unita and South African forces clashed with an Angolan army (Fapla) advance on regions controlled by Unita. Fapla was supported by Cuba and the Soviet Union. This culminated in the Battle of Cuito Cuanavale in Cuando Cubango province in southeastern Angola from January 13 to March 23 1988, which historians consider to be the second-largest battle on African soil since World War II. 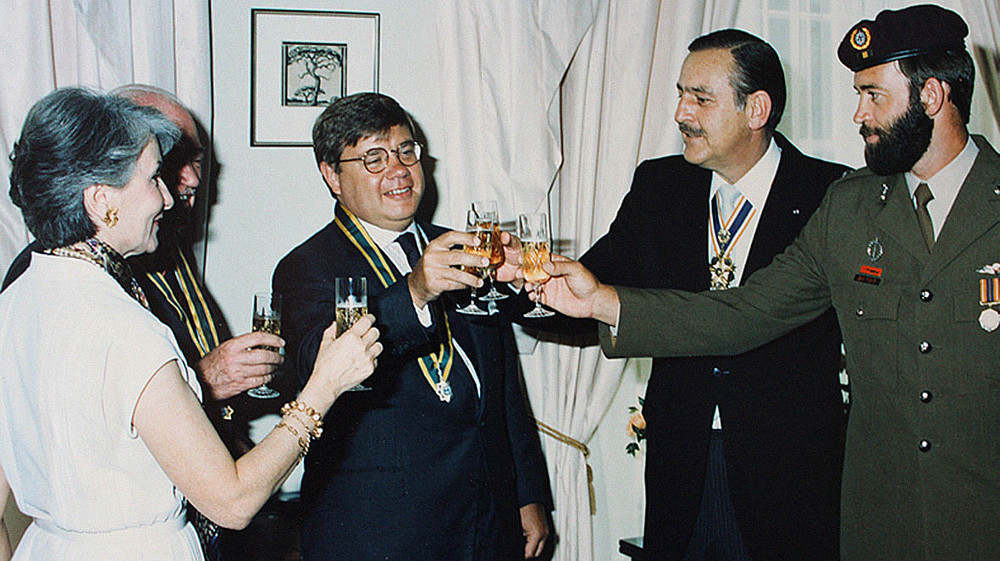 Peace negotiations initiated by the United States were under way before and during the battle. At Cuba's instigation, the Angolan and US governments began negotiating in June 1987, with Cuba joining a year later. This culminated in yet another round of negotiations that took place on March 9 1988 in London.

About two months later, on May 3, the South African government joined negotiations and the parties met again in June and August in New York and Geneva. They agreed to a ceasefire on August 8 1988.

The fighting at Cuito Cuanavale gave the peace process impetus. The end result was the signing of the Brazzaville Protocol on the banks of the Congo River on December 11 1988. Botha was there on behalf of South Africa, with Cuban vice-minister of foreign affairs Ricardo Alarcon and Antonio Franca N'Dalu, Angola's vice-minister of defence at the time, representing his adversaries. The signatories to the protocol committed themselves to helping with:

The story of the protocol, Plot for Peace, produced by Mandy Jacobson of the African Oral History Archive and the Ichikowitz Family Foundation, is scheduled for broadcast in South Africa by the SABC on Human Rights Day on March 21.

"The accord came at a time when our country was in flames," former ANC treasurer general Mathews Phosa says during an interview in the documentary. "The ANC had rendered the country ungovernable, but the government was also fighting, their troops being based in Angola. But no one was winning. Something had to give."

The signing of the Brazzaville Protocol was therefore an occasion when "peace was imposed upon violence", says Phosa, and Southern Africa entered a new era of good neighbourliness and peace.

"I believe the fact that Jean-Yves was neither American nor South African helped him to gain credibility among those at the negotiating table," says Phosa. "He gained the trust of Cubans quite easily, having worked in [the Republic of] Congo with the [Marxist] government of Denis Sassou Nguesso; he was also trusted by the Angolans. We cannot say he single-handedly ended the war. But his contribution had a domino effect on events in Southern Africa – the end of the war helped to secure independence for Namibia and it was therefore clear apartheid was on the way out, and so was Madiba!"

Ollivier, although now retired from the world of business, says he  still has his diplomatic fingers in a number of pies on the continent. On many occasions he has acted as an intermediary between parties in conflict across Africa.

He believes the trust and personal relationships he built with several African heads of state and officials over the decades helped him to initiate dialogue and make peace possible.

In a delicious twist of irony, Du Toit – an avowed enemy of communism during his recce days in the 1980s – now lives in the Republic of Congo. Here the former prisoner of war farms maize, rice and paprika as a beneficiary of the communist government of Sassou Nguesso.

Fred Khumalo's trip to the Republic of Congo was sponsored by the African Oral History Archive.