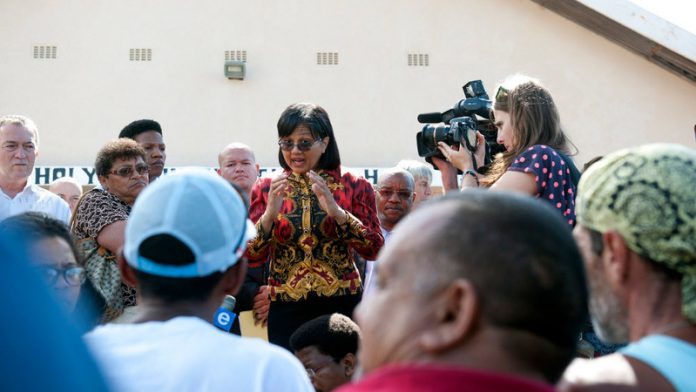 While Joemat-Pettersson announced new measures to try to resolve the contentious issue, this fifth generation fisherman said he was hoping for a miracle. His family had originally lived in picturesque Kalk Bay, but they were moved during apartheid under the Group Area's Act to Steenberg.

Now he feels he is suffering another injustice, because he said he is being prevented by the current government from making a living out of fishing.

Rudolph has the weather-beaten face of a man who has spent much of his life at sea, yet he was stranded on shore after the fisheries department dramatically reduced the number of traditional line-fishing licences issued.

"I never had a licence. I have my own boat and I have been using someone else's licence and taking crews out to sea. Many people lost their fishing licences, and now I can't go out to sea. I have been fishing for a living for 20 years," said the 52-year old fisherman."It always depended on the weather as to whether we catch a lot of fish. If we did not have a good catch, we still had enough to put food on the table. Now we have nothing."

His six crew members were given 50% of the fish caught, and the other half was sold to pay for Rudolph's boat and home bills, and cooked by his wife for family meals.

Fishing rights process
Rudolph's life, and those of his crew members, came to a standstill when the fisheries department made significant changes to its fishing rights process. Of the 455 traditional line-fishing licences the fisheries branch issued in 2005, only 205 were confirmed in the new allocation handed down on December 31. A hundred of those licences were given to new, unknown entrants.

Joemat-Pettersson preempted an urgent application to the high court in Cape Town on Monday by traditional line fishermen when she announced that the periods for appeals on the fishing rights allocation process would be extended by two months, and ending at the end of April 2014.

After talking to many fishing communities, she said there did appear to be legitimate concerns either relating to poor administration of the applications, or questionable judgements by the delegated officials.

The appeals process needed to be reinforced and strengthened, said the minister.

"I have appointed the law firm Harris, Nupen and Molebatsi Attorneys to advise me on the appeals process. They will undertake an urgent independent audit of the rights allocation process to ensure it was compliant with all relevant policies and legislation."

The law firm would start work immediately, she said.

"We are going to the Western Cape High Court [high court in Cape Town] as part of an urgent application to extend the extension given to line fishermen to go out to sea while their appeals were being heard," said Croome.

"We are asking for more time than the minister has announced. Line fishermen will have to sit now and worry about what is going to happen after two months. We have also put in a protest appeal because we don't have enough objective information with which to appeal the process. We are going to court irrespective. The department has not filed any motion to oppose us in court."

Croome said the fishermen still had no idea how the fishing allocation's scoring had been determined by the department, and they did not understand what process had been followed.

"We asked the department to explain it to us, and sent it a lawyer's letter demanding they give us the scoring and other information needed to make individual appeals," explained Croome. "They ignored that letter of demand and they forced us to go to court."

Fishing quotas
Acting deputy director for fisheries Desmond Stevens, who was in charge of the fishing allocations and was present at the meeting in Kalk Bay, has denied any irregularities in the reduction or issuing process of traditional line-fishing licences.

Joemat-Pettersson told journalists she had welcomed the allocation of fishing quotas by the department, prior to the deadline of December 31 2013.

"This is indeed an achievement that must be appreciated," said the minister. "However, since then I have spent a lot of time visiting coastal communities, especially here in the Western Cape. I have met many fishers who received rights for the first time, and they were ecstatic about what this would mean for their families and their communities. But I am sorry to report that there is also significant unhappiness regarding these allocations. Some of this should be expected, as not everyone can get a quota, and there will be some who have lost out. There is also unhappiness about the size of the quotas which were allocated. Fishers are telling me that it is not sustainable and they are unable to make a living from it."

Joemat-Pettersson said she was committed to clean administration. "If the process is found to be in order, we will have lost nothing, and gained enormous confidence in the integrity of the rights allocations."

The number and size of the quotas were based on scientific data, and their recommendations to the Total Allowable Catch, said Joemat-Pettersson.

'The allocation of rights'
"Secondly, in anticipation of the promulgation of the Marine Living Resources Amendment Bill, we have reserved some rights for co-operatives of small scale fishers in our coastal communities. So there are many who applied and did not get quotas. They will protest, and they will encourage others to protest, in order to try and secure these valuable rights. But people must accept that this is the nature of rights over a limited resource, as we do our best to sustain our fishing stocks for future generations.

"In the allocation of rights, we have made tremendous strides in changing the race and gender profile of the sector. More women are now rights holders – instead of being just bit players – and many people who have worked for years as fisher folk have become holders of lucrative assets. This has been a deliberate strategy, and a necessary one. We will not apologise for the radical transformation of the sector, or deal with complaints about this. Our priority is to de-racialise the economy and to address the challenges of unemployment."

Joemat-Pettersson added that she was not taking sides on the matter, or giving credence to what may just be allegations.

"But I do want to deal with these questions of propriety before I can consider any appeals that may be lodged. I cannot uphold or overturn a decision which may have been wrong in the first place. This is a caring government which seeks to address poverty and inequality."

'I am very despondent'
However, Rudolph's wife said she still felt "very down" after the announcements made by the minister.

"I am very despondent that my husband can't go out and fish. He is the breadwinner, and now we have nothing to eat, or money to pay our bills. At least we had fish on the table," said Debbie Rudolph.

Her husband had found little work since most of the boat owners lost their licences in Kalk Bay, she said.

Asked how she cooks the fish when her husband does go out to sea, and how she varies the dishes when fish is primarily what the family eats, Debbie Rudolph said she loved cooking.

"You fry the fish after dipping it in flour and eggs. Sometimes I make pickled fish. We used to eat mostly snoek, hotnot and yellowtail. My husband can't do any other type of work. All he can do is fish. What are we going to live on now?"