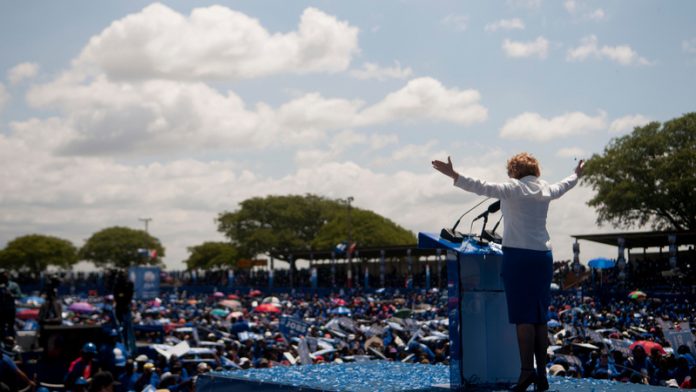 Zille, clad in a royal blue skirt and a white jacket to match her party's colours, told supporters that this year's election and the failures of President Jacob Zuma's administration in the past five years have created an opportunity for the DA to govern South Africa.

"There is a new mood sweeping our country," Zille said. "Despair is making way for hope. We must seize this moment. We dare not fail because so much depends on the courage of every South African to choose change."

The DA's policies on land reform and broad-based black economic empowerment (BEE) have come under a spotlight recently, with the party being accused of ignoring injustices and inequalities of the past with its "equal opportunities for all" focus. This equal opportunities campaign now appears to have been dumped. Zille sought to convince potential DA voters that this is not true, while putting an emphasis on the creation of decent, permanent jobs.

DA supports broad-based BEE
As part of the land reform programme, the DA promised to support share equity schemes that give farmers shared ownership of the land they work.

"We will put an extra R10-billion into ensuring successful, sustainable and productive land reform," Zille said.

The DA reiterated that the DA supports broad-based BEE that creates jobs for more people instead of creating a few billionaires "because the apartheid government denied millions of black South Africans access to economic opportunities".

BEE under the DA government would incentivise companies to create new jobs, implement training schemes and give workers a stake in companies they work for, Zille told supporters who filled Polokwane Showgrounds.

"We have already taken these steps where we govern [in the Western Cape, the only province the DA governs]. This is why DA governments receive the cleanest audits, get the best scores for service delivery to the poor and have the lowest unemployment rate in the country."

Though the ANC-led government was criticised throughout several speeches, Zille sought to alienate Zuma from former presidents Nelson Mandela and Thabo Mbeki's administrations.

It was at this time that basic services like water, electricity, sanitation and housing were rolled out, said Zille.

"Things changed, right here in Polokwane in December 2007. At its elective conference that year the ANC elected a new leadership. That was a moment when a great political movement lost its sense of direction. It was hijacked by leaders who care more about themselves than the people they are meant toserve."

The DA will try to reduce the ANC’s election majority and is prepared to go into a coalition with smaller parties if that will unseat the party that has governed South Africa since 1994. National elections are scheduled to take place on 7 May and with Sunday’s election manifesto launch, the DA has officially kicked off its national campaign.