Camac’s US slump drags PIC down 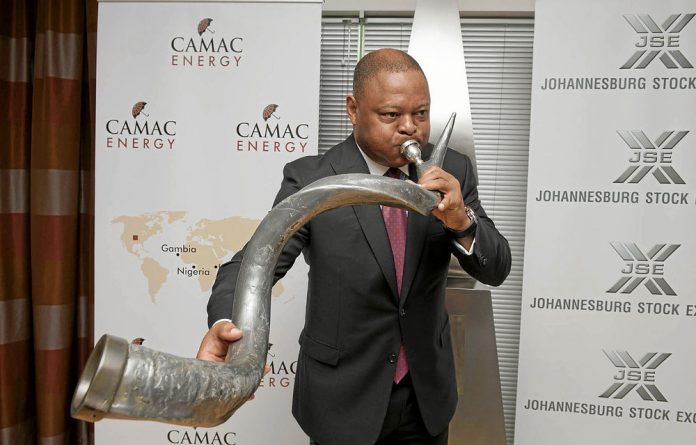 Camac Energy started life on the Johannesburg Stock Exchange this week by trading public servants’ retirement savings into the red, as the oil and gas company and the Public Investment Corporation (PIC) piled error upon inaccuracy to defend their tie-up.

The Mail & Guardian revealed a fortnight ago that the PIC was about to invest $270-million (almost R3-billion now) in Camac, though it verged on bankruptcy and despite its chief executive’s penchant for controversy.

Houston-headquartered Camac, led by Nigerian-American Kase Lawal, is a “penny stock”, with its primary listing on a New York junior exchange. As a condition for the PIC investment, it obtained a secondary listing on the JSE.

The M&G questioned whether Lawal’s proximity to President Jacob Zuma and his habit of making political donations might have induced the PIC to risk state pension money unduly. Lawal and Camac have denied donating to the ANC.

Camac was in so much trouble at the end of September last year that it had to issue a regulatory announcement admitting “substantial doubt about the company’s ability to continue as a going concern”.

Camac thrown a lifeline
The PIC’s agreement in October to buy 30% of Camac gave the latter the chance to dig itself out of the hole by putting together a package that included buying the 40% it did not yet own of its only producing asset, the Oyo oilfield off Nigeria, and contracting to complete a new well in the hope it would augment the field’s 2 000 barrel-a-day trickle.

Although this was a godsend for Camac, the question remained whether the PIC would get value for money.

Camac’s plan started coming together last Friday, when the PIC paid its first tranche of $135-million and the Oyo acquisition was completed.

JSE trading started on Monday. On the face of it, Camac’s performance there left the PIC investment ­modestly in the money.

But the volumes traded in Johannesburg were so low compared with New York – the former representing only about 2% of the total trades on Wednesday – that the New York price provided the more accurate measure by far.

There, even though the whole of Oyo and half of the PIC investment was finally in the bag, the market expressed its scepticism by pricing Camac at $0.63 a share at the close of trading on Wednesday, well below the $0.72 at which the PIC is buying its 30%.

This left the PIC’s investment in the red by more than $16-million (R173-million now).

Decision based on merit
Meanwhile, the PIC finally broke its silence last Friday, saying in a statement that it had made the investment “on its merits”.

It claimed that Camac’s assets were worth well over the $900-million valuation at which it was buying, and that the second half of its investment was safeguarded by it depending on a new Oyo-7 well being completed “and attaining more than 7 000 barrels of oil per day”.

PIC chief investment officer Dan Matjila said in follow-up answers that the PIC had based its valuation on a competent person’s report assessing Camac’s oil reserves.

More curious is the claim that the PIC’s second tranche is dependent on Oyo-7 reaching 7 000 barrels, which remains Camac’s main short-term revenue hope.

Indeed, an examination of the PIC’s share purchase agreement shows that Camac must complete Oyo-7, but it names no production target.

Matjila later said that documentation before the PIC’s investment committees had captured a condition precedent as “the completion of drilling and attainment of set production rates for Oyo-7”. He gave no specific reference.

Addressing concerns about Camac and Lawal’s track record, the PIC statement said that “both the NYSE [New York Stock Exchange] and JSE have undertaken requisite due diligence on both the entity and the directors behind it”.

There must be substantial doubt on this score. New York regulatory filings show that at Camac’s April 2010 birth in its current form – when Lawal and family acquired a majority shareholding in the company, then called Pacific Asia Petroleum Inc – the transaction was treated as an “acquisition” and not a “reverse takeover”.

Concerns
Treating it this way meant that Lawal and other directors associated with the new ownership were not subjected to the rigorous checks reserved for new and reverse listings. The United States Public Company Accounting Oversight Board, there to protect investors, has since expressed concern about this treatment.

Similarly, the JSE due diligence appears not to have identified all the relevant issues. In Camac’s abridged JSE pre-listing statement, an error as basic as that Camac was acquiring 60% of Oyo, instead of 40%, slipped through.

And the full pre-listing statement assured investors that none of Camac’s directors, including Lawal, had “ever” had a company they directed “put into liquidation or … placed under judicial management or had an administrator or other executor appointed”. In fact, Lawal was a director of oil explorer Tuskar Resources as it went under in 2001.

London-listed Tuskar’s collapse followed Lawal putting it and other companies together in another Nigerian oilfield deal, which ended with the police bringing criminal charges of fraud and illegal oil extraction against him and some associates. The matter was never tested in the courts, and Lawal denied wrongdoing.

In his later answers, Matjila said he could not speak for the New York or Johannesburg exchanges, but that Camac had to report to the New York exchange annually on its corporate governance practices, as required by the Sarbanes-Oxley Act, and that “we would like to think the JSE is competent enough to do a due diligence on directors of companies seeking to list”.

In the meantime Lawal, on a charm offensive in South Africa to coincide with the JSE listing, appears to have misled business channel CNBC Africa viewers in answering the allegation that the PIC investment had saved Camac from bankruptcy.

Lawal said the M&G had written about “a company I do not know”, suggesting that Camac Energy’s liquidity had been proved by large recent investments.

“As a matter of fact, let me just give you a little background … Over the past 18 months, this company has invested more than $450-million: [the] acquisition of ENI’s interest in Allied, which is in excess of $250-million, and about $100-million was just spent in drilling a high-impact, very successful, deep-water well that will increase production several times.”

Regulatory filings show that these sums were spent not by Camac, but by Allied Energy, a Lawal family company in Nigeria. Although those assets are now coming to Camac as part of the Oyo acquisition ­– paid for largely with the PIC’s money – it proves nothing about Camac’s liquidity before the PIC investment.

A spokesperson for Camac and Lawal declined to comment specifically, referring instead to a Camac brochure extolling its prospects.