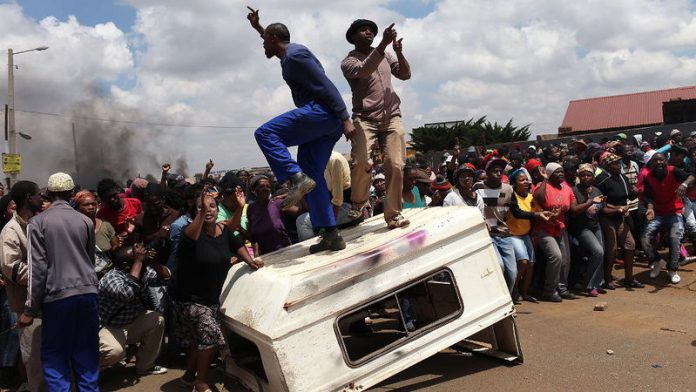 The ANC in Gauteng is trying to determine the identity of a man pictured in newspapers wearing the party's bib and carrying a gun during clashes in Bekkersdal.

The party would determine if the man in the picture of Friday's edition of The Citizen was an African National Congress member or a police officer in ANC attire.

"We have to find out if he is our member. If he is a protector [police member], he is not supposed to wear ANC gear," said Kekana.

On Thursday, an ANC delegration visiting Bekkersdal were pelted with stones during a door-to-door campaign ahead of the May 7 general election.

Thabang Wesi, leader of the Concerned Residents of Bekkersdal said residents saw ANC "bodyguards" with weapons in the township.

He alleged that they shot at unarmed people, mainly school pupils.

Live shots allegedly fired
The Star on Friday reported that ANC "bodyguards" fired live ammunition at residents after schooling was disrupted at around 11am.

The Citizen newspaper carried pictures of the incident. On its front page, an officer in a navy blue police uniform is seen pointing a firearm at two residents backed against a wall. The residents appeared to be unarmed.

In another picture, a man wearing an ANC shirt is seen with a gun behind his back.

ANC Gauteng caucus spokesman Mbangwa Xaba said the ANC did not have bodyguards but VIP protection, which was provided by the SA Police Service.

He said the ANC representatives were protected by their VIP security in Bekkersdal because they were pelted with stones.

Police spokesman Lungelo Dlamini could only confirm that six people were arrested for public violence in the area after police vehicles were hit with stones. –Sapa