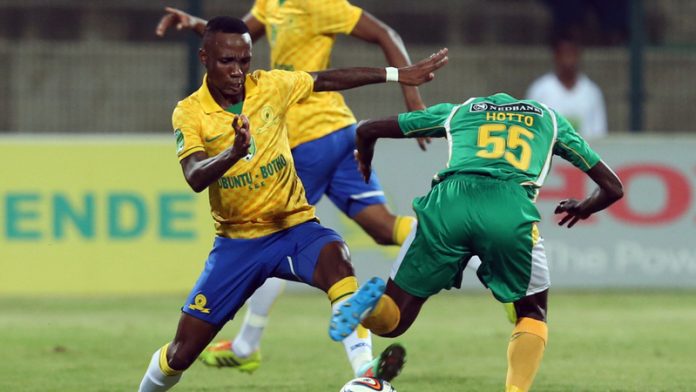 Philani Shange had given the hosts an early lead before Dove Wome equalised six minutes from half time at the King Zwelithini Stadium.

Mokoena and Laffor then struck twice in six minutes either side of the hour before substitute Tau completed the route as the Brazilians joined Orlando Pirates, Bidvest Wits and Maritzburg United in the last eight.

The visitors had made a bright start on a warm Durban evening as Laffor showed neat footwork on the left side of the box, before forcing Nkosi Gumede to react quickly with a sharp save to his left.

Arrows responded with two quick chances of their own. First new signing Chris Katongo skewed wide from 20 yards after holding off a defender, before Manti Moholo fluffed a fantastic one-on-one chance – the on-loan Pirates player rushing and aimlessly directing wide.

However, there was no denying Shange the opener after 13 minutes as he kept his composure to power in from the centre of the box after collecting Siyanda Zwane's squared pass from the right.

Doubling the lead
The Pretoria giants responded when Laffor and Wome struck over, while Katongo did the same at the other end with an optimistically curled free-kick that almost caught Wayne Sandilands off his line.

Katongo, Zambia's African Nations Cup-winning captain from 2012, had a good chance to double the lead after the half hour when he flicked an inviting Deon Hotto cross inches wide.

Abafana Bes'thende were made to pay for the miss in the 39th minute as Laffor delivered a defence-splitting pass to Wome, who squeezed a low finish in off the near post.

After the restart, Gumede almost gifted the visitors the lead when he spilt a routine catch, allowing the ball to be played back across the goal for Surprise Moriri, who saw his header blocked on the line by Vuyisile Ntombaythethi.

Moriri then struck the crossbar with a rasping drive as the visitors got closer.

Tipped away
They took the lead when Mokoena smashed in from the edge of the box, goalkeeper Gumede again in a good position to save with the ball going through him, after 58 minutes.

Four minutes later a third goal was added when Laffor charged into the right side of the box and slid in calmly beyond the Arrows keeper.

That goal knocked the stuffing out of Arrows. Their only real chance thereafter was when an acrobatic Katongo shot had to be tipped away by Sandilands.

Gumede almost gifted a fourth goal to Sundowns when he fumbled a Hlompho Kekana free-kick onto the upright, before gathering on the second attempt.

Laffor then poked wide after good work from Percy Tau on the left flank, before the latter calmly finished a pass from Teko Modise giving Sundowns an easy win. – Sapa