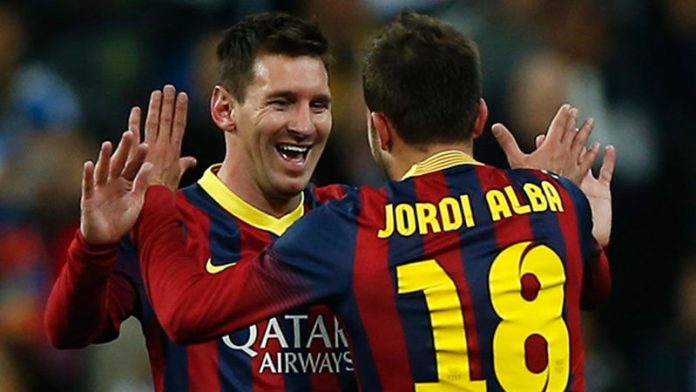 Lionel Messi may have lost his world player of the year crown to Cristiano Ronaldo, but he got sweet revenge on Sunday by upstaging the Portuguese forward in his own backyard with a hat-trick that fired Barcelona to a 4-3 victory over Real Madrid.

Barcelona's Messi, voted world player of the year four times in a row before Ronaldo scooped his second such award, levelled an action-packed El Clasico match at 2-2 just before halftime with an opportunistic strike through a crowd of Real defenders.

He then kept his cool at a bubbling Bernabeu to net two second-half penalties, including the winner six minutes from full time, blowing the Spanish title race wide open.

The defeat left Real, who had captain Sergio Ramos sent off midway through the second half, and city neighbours Atletico Madrid tied at the top on 70 points.

Barca, chasing a fifth title in six years, closed the gap to one point and now sit third with nine games left.

"It was an extremely important win for us," said Messi, who missed two months of the season with a thigh injury but has been in scintillating form since his return in January.

"It was a brilliant game for the fans and for us," added the 26-year-old Argentinian footballer. "This team always responds on the big occasions but we have to continue … We cannot be satisfied with this win. We have to forget what happened quickly and focus on the future."

Top scorer
Messi's treble put him clear in the list of top scorers in the Clasico on 21 goals, three ahead of Real great Alfredo Di Stefano.

He moves up to second in the ranking of all-time leading La Liga marksmen with 236 goals – two ahead of former Real striker Hugo Sanchez – and he is fast closing in on record scorer Telmo Zarra, who netted 251.

Messi was quick to downplay his personal achievements and keep the focus on the team.

"The most important thing is that we won the match," Messi said. "Things are going well for me individually but what we should remember is the great performance of the group.

"We are closer to the leaders. We have to keep this up until the last match. There are very few games left and we cannot afford any more mistakes."

Season tally
Ronaldo also netted from the spot to take his tally for the season in Spain's domestic league to 26, three ahead of Atletico forward Diego Costa and five more than Messi.

Like his teammates, he was furious with referee Alberto Undiano Mallenco and suggested he should not be allowed to officiate another Clasico.

"The referee made some incredible decisions but we have to carry on," said Ronaldo.

"In a Real Madrid-Barcelona game, you have to have a referee who is up to the task," added the 29-year-old player.

"I don't want to use the referee as an excuse but if you analyse the 90 minutes, there were a lot of mistakes."

Ronaldo suggested that some people with influence, whom he did not identify by name, had wanted Real to lose and the referee had not been entirely objective.

"Real Madrid is the greatest club and there is a lot of envy around it," he said. "It's tough because a lot of people did not want us to win and Barcelona to be out of the title race.

"They probably do not want Real to win this league. It makes me think that you don't only win matches on the pitch but also with a little bit of help from outside."

Real now need to regroup for Wednesday's game at Sevilla, when Barca host Celta Vigo and Atletico are at home to Granada. – Reuters