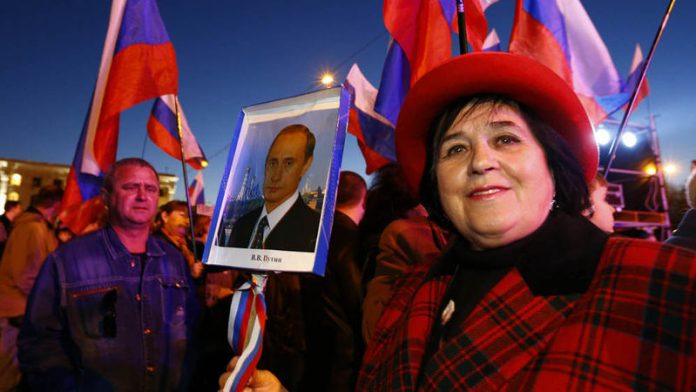 We know where this is likely to end. We will accept Russia's sovereignty over Crimea. Sanctions will be quietly dismantled, Moscow will reassure Kiev with a deal on neutrality. Nato will agree not to expand further eastward. The G7 will again become G8, and Crimea will join Tibet, Kosovo, East Timor, Chechnya, Georgia and other territorial interventions that history students will struggle to remember.

But how do we get from here to there?

We all seem much wiser about Russia and Ukraine than we were a month ago. Russian President Vladimir Putin is not Hitler and Crimea is not Sudetenland, despite the efforts of Russophobic chest-beaters to pretend so. He is a dictator, brutal, proud, controlling, intolerant of criticism and infused with obsessive patriotism. But if we get on fine with the Chinese politburo, why not him?

The triumphalism of Western diplomacy towards Russia since 1989 is now seen as the provocative taunting not just of Putin but also of all his still-benighted nation.

Putin's Ukraine expert, Sergei Glazyev, declared in 2008 that any further moves to integrate Ukraine with the West would lead to "social and economic chaos". Russia would act for sure to protect what it saw as its security interests. Nato ignored such warnings, declaring that Georgia and Ukraine "will become members of Nato".

To Putin it all rolled up into his version of the Cuban missile crisis.

Veteran political scientist John Mearsheimer wrote in the New York Times recently that, if any one country is needed as a buffer between the West and Russia, then that country is Ukraine. The West made "a fatal mistake in backing the [Kiev] protesters" in their coup. It was strategically inept.

Russia had lost an empire and was unlikely to accept a further tightening of its zone of interest in Ukraine. Sanctions were not an issue.

"When vital interests are at stake," wrote Mearsheimer, "countries are invariably willing to suffer great pain to ensure security."

Baffled by the West
The West's brinkmanship over Ukraine seems clumsy. It was reported this week from Moscow's inner sanctum that those round Putin were as baffled by the West's actions as they were surprised, even shocked, by their leader's impulsive reaction. The Crimean occupation was not long planned. It was Putin's response to the West's rejection of his coalition compromise for power-sharing between Kiev and the eastern region after the Kiev coup.

Putin was hurt and angry, his pride especially wounded by criticism of his beloved Sochi Olympics. Anyone who thinks the Olympics are not about politics can think again. As Putin's general in Crimea boasted, the invasion must be all right because "the international community trusted Russia to hold the Olympic Games".

Had Putin's compromise been accepted, so an aide reports, Crimea would still be in Ukraine.

In his passionate if paranoid speech in Moscow last week, Putin wondered at the West accusing him of "violating norms of international law", given its own military interventions. Western countries seemed to believe "that they can decide the destinies of the world, that only they can ever be right".

He must have gasped as Britain's prime minister, David Cameron, returned from a friendly visit to Israel and attacked Russia's invasion of neighbouring territory as "unacceptable". When did the British government demand even a referendum on the West Bank?

Calm voice of Merkel
In contrast to the posturing and empty rhetoric in London and Washington is the calm voice of Germany's Angela Merkel. We hear that she and her foreign minister, Frank-Walter Steinmeier, have been reading Christopher Clark's The Sleepwalkers, an analysis of the countdown to the Great War.

Steinmeier invited Clark to Berlin to debate the topic. Imagine a British politician reading such a book, let alone acting on it.

Clark traces the way highly charged relations between states trap players into losing room for manoeuvre. They caricature their foes and turn their backs on compromise. Merkel grew up in East Germany under the KGB's lash and has tried to see Putin through Russian eyes. She sees the absurdity of United States President Barack Obama preaching international law at Russia, of punishing it over Crimea, while scheming to bring Ukraine into the Western camp. She sees the 1914 danger, of vague ultimatums, unenforcible red lines and ill-considered alliances.

Putin emerges from this crisis not as clever and calculating but as an emotional, scary figure, lonely and alarmingly bereft of checks or balances. His seizure of Crimea has been popular and, in the scheme of things, no big outrage against international order.

But the sabre-rattling along Nato's eastern border is as provocative as were the careless antics of Nato and the EU in Kiev over recent years. Putin too needs a bridge over which to retreat.

Cold warriors
The cold war dinosaurs who still tramp the corridors and editorial columns of London and Washington seem almost to pine for the virile certainties of 1945-1989. Russia must "pay a heavy price" for Crimea, if only to make cold warriors feel good. That is unlikely to incline the bear to slink back to its cave.

Crimea must be a classic instance of a great power wrestling inside the shrunken straitjacket of imperial retreat, as Britain did half a century ago. As the Russian expert Susan Richards points out in the current issue of Foreign Affairs magazine, Crimea is the most painful and potent symbol of Russia's lost glory.

"It was the backdrop for more great scenes of Russian culture than anywhere outside Moscow or St Petersburg", the resort and inspiration of Pushkin, Tolstoy, Chekhov and others. Its donation to Ukraine in 1954 was never likely to last.

Nato remains a bulwark against Russian revanchism. Putin claims to understand it, and fiercely disavows any change to that state of affairs.

As for Ukraine, we can chide Russia over respect for sovereign borders, if we have the cheek to do so. We can tell Russia to behave better towards small countries. But Putin will not return Crimea to Ukraine. Trying to make him do so is ridiculous.

The real job is somehow to get out of this mess. I imagine Putin agrees. – © Guardian News & Media 2014