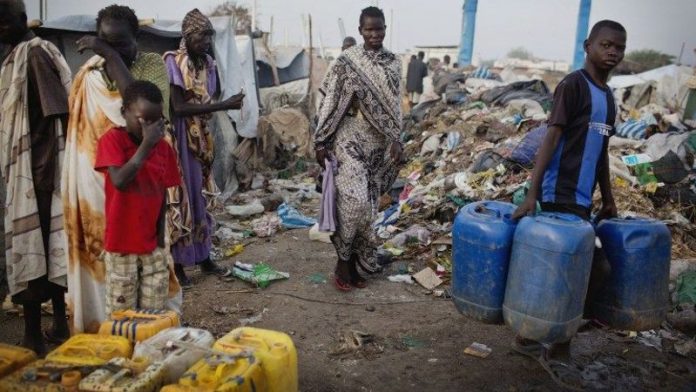 Peace talks aimed at ending civil war in South Sudan have been stalled until the end of April, rebels said on Wednesday, despite UN warnings that millions of lives are at risk.

There has been little progress after weeks of talks in the Ethiopian capital Addis Ababa.

A third round that started late last month was largely reduced to squabbling in luxury hotels over who could attend the negotiations.

More than a million people have been forced from their homes since the conflict began, and the United Nations has warned that conditions continue to deteriorate.

Hussein Mar, a delegate for the rebels loyal to Machar, said the two sides had made some progress on outlining the agenda for talks.

But even on this limited point, they had failed to sign a formal agreement due to government objections to members of the negotiation team, including powerful former ministers initially jailed and accused of sparking the violence.

The talks, which have already been repeatedly delayed, are now due to resume on April 30, Mar said.

Ongoing fighting
A cease fire between government and rebels inked in January is in tatters with fighting ongoing.

Last month the European Union and United States threatened sanctions for both sides if they failed to progress with peace talks and stick to the cease fire deal.

On Tuesday, UN World Food Programme (WFP) boss Ertharin Cousin, at the end of a visit to South Sudan along with the UN refugee agency chief Antonio Guterres, warned that "lives are at stake".

"The crisis in South Sudan could endanger millions of lives in the coming months if urgent action is not taken to put an end to the conflict," the UN said in a statement after the aid chiefs' visit.

Oxfam on Wednesday warned that people were at "severe risk" and appealed to negotiating teams to "reach a swift and peaceful resolution" to the war.