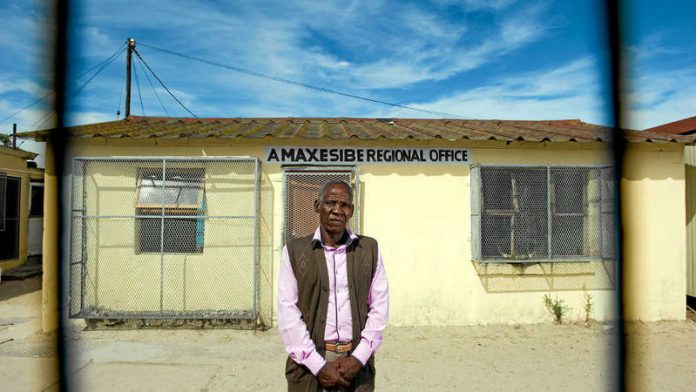 Mali Hoza was known as a notorious ­witdoek (white headscarf) vigilante leader in the mid 1980s, with a large following that unleashed a reign of terror in informal squatter camps on the Cape Flats, but he now says he was falsely labelled.

"I was never a witdoek," insists the 73-year-old community leader, a small figure who still retains a powerful presence. He appeared not willing to dwell on the past, repeating, "I have never been a witdoek. It is only the politicians who gave me that name. This was because the comrades chased me out of office when I was mayor of Khayelitsha, and they said I was a witdoek."

The witdoeke were considered to have close links with the security forces and were recognised by the white headbands they wore for identification. Alleged collusion between the police and the witdoeke led to fighting against ANC-aligned residents, specifically attacks on members of anti-apartheid movement, the United Democratic Front.

This week the Mail & Guardian spoke to Hoza in the Amaxesibe regional office, located among the shacks in Site C in Khayelitsha. The man who was once widely feared on the Cape Flats was surrounded by members of the traditional council he says he set up to benefit the community.

The room where our meeting took place was swarming with flies, and traditional council member Nondwe Mdini explained that a cow and sheep had recently been slaughtered there for a church gathering. After she opened the back door to ventilate the room, Mdini took a seat beside Hoza, and translated for him.

It was a genteel arrangement, and when Hoza described himself as the paramount chief of Khayelitsha, it was affirmed by traditional council members who nodded in agreement.

The scene at his office seemed far removed from the days when Hoza and Johnson Ngxobongwana, a previous mayor of Old Crossroads, were considered leaders of the witdoeke.

Bloody confrontations
Although Hoza was never implicated in any acts of violence, the years of intensive fighting destroyed squatter camps in areas such as Nyanga Bush, Nyanga Extension and KTC, and Crossroads. Many were killed and tens of thousands left homeless during the bloody confrontations, which were sparked by the government’s desire to move people from other informal ­settlements to Khayelitsha. During this period, Hoza fled Crossroads, and moved with thousands of others to Khayelitsha, where he was mayor for six years, before being chased out of office for being a witdoek.

Asked whether he knew what had ­happened to Ngxobongwana, Hoza said he died a few years ago in the Eastern Cape. "I went to his funeral," he said. "I was sad that he did not live to see real democracy in action."

In 1994, there was outrage when Hoza and Ngxobongwana were nominated as National Party candidates for the Western Cape provincial parliament in the April election, and Hoza spent the next few years as a politician.

He parted ways with the re-invented New National Party when its leader, Marthinus van Schalkwyk, decided to dissolve the party and merge it with the ANC in 2004. "I refused to join them, as I couldn't see myself joining the ANC," Hoza said.

In 2011, Hoza popped up again when he and others swore allegiance to the Democratic Alliance in a ceremony in Khayelitsha. According to a local newspaper report, he wanted to become a ward councillor, but his name was put forward too late to make any of the lists.

A man of few words these days, Hoza describes himself as a fervent member of the DA, a party he believes can save this country from self-destruction.

But, however loyal to the party, Hoza did not put himself forward as a DA candidate in the upcoming elections, as he wanted to dedicate himself to the traditional council.

Community help
There are now 40 traditional council members but, although there is the will to help the community, there is no funding forthcoming from provincial or national government.

Outside the office, children play in the road, but fear for their safety always lurks in this community. Council members speak with anger about the crime and "tsotsis" (gangsters) ­plaguing the township.

Hoza remains insistent that he is wrongly accused of being a member of the witdoeke. "In 1981, I fought against the pass books, and for black people to be allowed to stay in Cape Town," he said.

"In 1982, I took the people to hold a hunger strike in Caledon [Square Police Station, Cape Town] against the pass laws. I can continue to give you a list of things I did for the people. These are the things I fought for."

Vigilantes brutal tactics had state sanction
As many as 3 300 civil cases were instituted against the police by people who lost their homes during the fighting between so-called witdoeke and residents of informal settlements on the Cape Flats.

Many of the former witdoek operatives were made ­kitskonstabels (instant constables) in South Africa's security forces in the late 1980s.

Although the direct involvement of Mali Hoza cannot be proved, his and Johnson Ngxobongwana's followers's desire to rid the squatter camps of those who backed the ANC and the United Democratic Front led to untold suffering.

The Truth and Reconciliation Commission investigated cases of murder, allegedly by witdoeke.

A former director in the South African Police Service, Leonard Knipe, who was the provincial commander of the serious violent crimes component in the Western Cape, was asked to give evidence on his investigation into the brutal murder of two men, Vioani Geobase and Lukasine Veneni.

Prior to their deaths, the two had been in the company of two women, said Knipe. These women were traced, and the police were led to a shack in Crossroads, which was found to contain a cell and a court room, which Knipe referred to as a "people's court".

"Exhibits such as court books, canes, tyres and the like were seized. According to information and evidence at our disposal, the local community leader of Crossroads, the so-called mayor of Crossroads, Johnson Ngxobongwana, was in charge of the people’s court," Knipe told the commission. Ngxobongwana was arrested, but released on bail of R50, against Knipe's wishes.

Knipe told the commission how a brigadier, his immediate superior, had phoned him to say he had been severely rebuked because of the actions against Ngxobongwana.

It was clear that the security police, and some police officers, "carried a torch for vigilante leaders in Crossroads", Knipe said.

Young voices get a radio platform in Khayelitsha