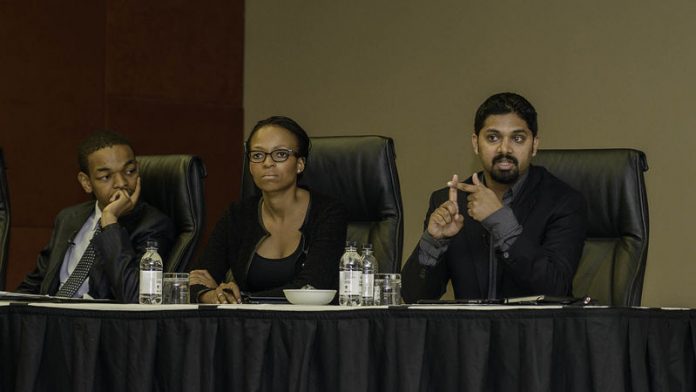 The agency’s chairperson Yershen Pillay, Matsi Modise of Fuhara Afrika and chief executive of the South African Black Entrepreneurs Forum and Khe­thinkosi Dlamini of McKinsey sat on the panel to discuss youth development and entrepreneurship.

The debate was dominated by questions from the audience that focused mostly on the National Youth Development Agency’s (NYDA’s) apparent lack of visibility and reach into black communities, with the agency roundly slammed for not doing enough to reach out to black entrepreneurs.

This criticism was based in part on the revelation by Pillay that only 12 applications had been received to a R2.7-billion entrepreneurial fund made available in partnership with the Industrial Development Corporation and Small Enterprise Finance Agency.

“Maybe you should identify where the entrepreneurs are. Maybe they are in Soweto. Go there and tell them ‘we are here’, rather than doing it in Sandton,” said one participant. “Are you visible enough? How far have you been in Soweto and how deep have you been into Alexandra. I’ve only met you guys here. Have you been to the townships and engaged with people? Let’s talk about the people who need this knowledge,” commented another.

Pillay responded by laying the blame on a culture of entitlement and dependency on organs of the state to “deliver the promised land”.

“When we changed the strategy of the NYDA, we said: you lead, and we will support,” he said. “We then asked what opportunities and support need to be provided? We can’t just give money without giving business development support. That is where the NYDA has more expertise.”

He said that changes in approach in the recent past had been to produce a single entrepreneurship programme that draws on the expertise and reach of various state entities. In response to a question about what impact this had made, Pillay said six million young people had been assisted by state entities in the past five years.

“The challenge is: How do we help?” he said. “We need the state, labour, the private sector, civil ­society and young people collectively driving youth development in the country. There is no silver bullet to youth unemployment — it has to be a multipronged approach. In that way we will be able to change this culture of dependency and move to a culture of responsibility.”

Modise supported the view of a co-ordinated approach, saying that active citizenship was vital. “How can we help the NYDA and appreciate the fact they are not able to able to reach all the youth?” she asked.

“You as citizens, as the youth, need to join forums and chambers and let them be the vanguard of development and the voice of your concern. If you alone come and say this is my challenge, but it is not going to be as effective as coming as a unit.”

Pillay had acknowledged in his earlier presentation that the most pressing issue facing young people is youth unemployment. According to a youth development index released last year, South African ranked third after Greece and Spain for the highest number of unemployed youth. He identified access to education, health and wealth, and the ability to participate in the economy as three key pillars to addressing this problem.

Dlamini added to this by saying that the issue of addressing the education crisis lay in looking at the entire education system. He suggested that the private sector be challenged to invest in basic education so that the necessary foundations are laid to ensure that the youth entering tertiary education are sufficiently skilled.

“And we need to recognise that we need skills development even after tertiary level,” he said.

“The pipeline is quite thin: let’s think about the downstream and how we can start making investments there.”