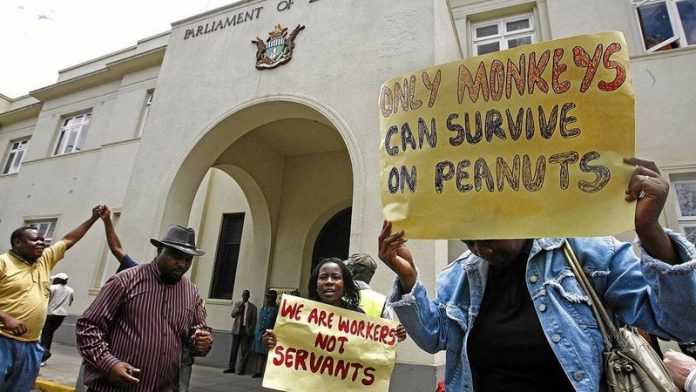 Zimbabwe's liquidity crunch is having a knock-on effect on the welfare of workers, with both the public and private sector battling to pay employees.

The situation is equally dire in the private sector, with revelations that most firms have been delaying paying workers their monthly salaries or paying them in instalments since January, citing the prevailing liquidity crunch and the general harsh economic environment.

Labour lawyer Rodgers Matsikidze said that for the past four months he and his fellow lawyers have been inundated with complaints from private sector workers complaining about late payment of salaries and other benefits they signed up for.

"The delay in payment of workers' salaries is a cause for concern in the labour market but the phenomenon confirms we have a big liquidity challenge in the country. There is no money in the economy," said Matsikidze, adding that it was a violation of the Labour Act not to pay salaries on agreed dates.

Matsikidze pointed out that most workers' contracts provided pay dates of salaries, which were also reflected on individual payslips.

"The workers will have already provided a service and, remember, they are not paid in advance," he said.

Top executives
Economist John Robertson said the entire economy is affected by the liquidity crisis, which he said will only result in more company liquidations.

"Things have gone horribly wrong. The workers are feeling the pinch because they aren't getting their salaries on time. When salaries or wages are delayed, the economy does not tick as very few people are able to go shopping," said Robertson.

But the country's biggest labour body, the Zimbabwe Congress of Trade Unions, said that, although the economy could be reeling from a severe liquidity crunch, the problem is also exacerbated by top executives in both the private and public sectors who earn huge salaries and are also using the crisis to "cheat" workers by delaying their monthly salaries and refusing to pay a living wage.

"We are aware private sector employers attribute delays in paying workers to challenges in the economy, particularly the liquidity crunch, but top executives continue to earn obscene salaries. For instance, we have a latest case in which, at a certain bank, the chief executive officer earns $35?000 a month while about 40 workers at the lower level share $31?000," said the union's secretary general, Japhet Moyo.

"If you look around and look at the houses being built in Harare's low-density suburbs and cars being driven in the capital you fail to understand where the issue of liquidity crunch comes from. Executives are cheating workers," said Moyo.

'The money is not here'
But Robertson said the liquidity crunch is real and had indeed affected the payment of salaries. He said the country had no money owing to a myriad problems, among them shrinking consumer spending, declining company profits and the collapse of the manufacturing sector, which he said is operating at about 30% of its capacity.

"The money is leaving the country to pay imports. Real profits are being made by people outside Zimbabwe. The money is not here; it is somewhere else."

Robertson said the country urgently needed to restore its productive capacity by among other things reviving the large-scale commercial farming sector and recapitalising industry.

"But the tragedy is that the government is refusing to listen to what everybody is saying: the economy is turning down. It urgently needs to do something and it knows what it has to do."

Finance minister Patrick Chinamasa did not respond to questions about how many civil servants had not been paid.

Even before the Covid-19 pandemic, the situation in Zimbabwe could not have been much worse
Read more
Africa