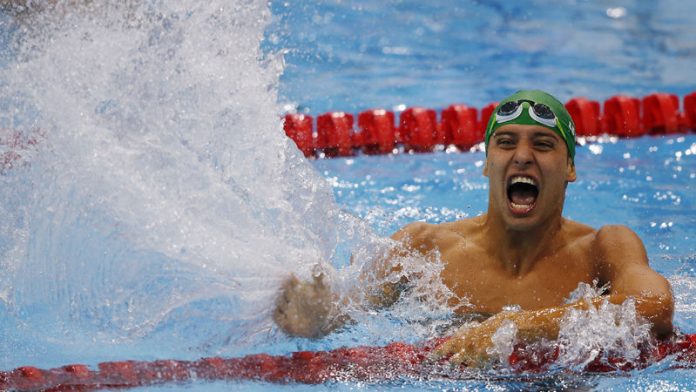 Chad le Clos won his big showdown with Dylan Bosch on the opening night of the South Africa Aquatic Championships with the pair among four swimmers to post Commonwealth Games qualifying times in Durban on Monday.

Olympic gold medallist Le Clos recorded the fastest time in the world this year to win the 200m butterfly final in one minute, 54.56 seconds (1:54.56).

Bosch, who broke the National Collegiate Athletic Association or American Universities's record in the 200 yards butterfly just under 10 days ago, was second in 1:56.92 with both men dipping under the 1:57.03 qualification mark.

There were also qualifying times posted by Myles Brown in the 400m freestyle final, which he won in 3:49.05, while Karin Prinsloo was the only female to book her ticket to Glasgow 2014 with a time of 1:58.43 in the 200m freestyle.

The Le Clos-Bosch showdown was the most anticipated of the evening as the reigning champion lead a high-quality field from start to finish.

The 21-year-old Le Clos is bidding to win eight individual titles at the meet this week and was delighted by his performance.

"A big ups to Dylan for getting the time as well. It will be great to have both of us in the same event at the Commonwealths, both right up there in the top five."

The six-day competition at the Kings Park Aquatics Centre in Durban is doubling up as the nationals as well as the official qualification event for the July 23 to August 3 spectacle in Scotland.

Bosch, who was ahead of Sebastien Rousseau (1:58.73), the fastest swimmer in the heats, was pleased with his own showing.

"It's really nice to make it," Bosch said.

"There's a lot of travelling to come all the way from America where I had a hectic schedule over the past month, so it's just really nice to get the time in.

"Now going off to Scotland to represent South Africa, it's what I came here to do and I'm delighted."

Setting the tone
Meanwhile, Prinsloo initially set the tone for the evening by waltzing home less than a third of a second inside the qualifying time of 1:58.74.

"It's always good for your confidence when you start off a competition so well," Prinsloo said.

"There's always pressure coming into these events, so I'm just relieved to have got through."

Ross missed out on 200m individual medley qualification by recording a time of 2:15.83 on her way to winning gold. Her time was less than a second slower than the 2:14.97 qualifying time.

Vanessa Mohr (27.08) was the fastest qualifier in the 50m butterfly, while Tara Nicholas (31.95) secured the top time in the 50m breaststroke semi-finals.

All swimmers must record the stipulated qualifying times this week if they want to have a chance of making the South Africa squad for the Commonwealth Games. – Sapa