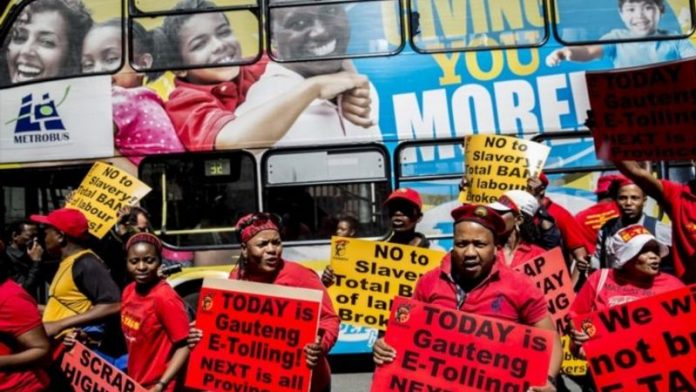 While the controversial e-tolling of Gauteng's freeways has not yet won support from the likes of Cosatu, it has won over many users, said Deputy President Kgalema Motlanthe.

The 201km freeway network is monitored by high definition CCTV cameras and the metro police are also in the building while Sanral vehicles are dotted along the network in order to respond to incidents promptly.

Also speaking at the event, Minister of Transport Dipuo Peters said the centre alone had created decent and sustainable jobs for 1 300 young people and the freeway improvement project had trained more than 18 000 people while 110 000 job opportunities of varying degrees had been presented. Peters described the Gauteng network as one of the best in the world.

Motlanthe said the costs of such a project should not outweigh the benefits, and the upgraded network will contribute significantly to economic growth.

"As the gap between the haves and the have-nots gets wider, there is a responsibility to create wealth that is socially and environmentally sustainable … the idea was never to burden the poor with added expenses," he said. "The poor consumer will experience improved quality of life."

However, "we could not persuade our own colleagues in the labour movement," he said.

Cosatu
Mothlanthe said Cosatu understands the issues but has decided to oppose the tolling. He said they had promised to go back to their mandatory structures to address the issue but "this never happened for some reason … it was never on the programme of those important gatherings".

Sanral chief executive Nazir Alli had interacted with Cosatu general secretary Zwelenzima Vavi, Motlanthe said. "He gave him a whole mountain of files, but they were not legible so our poor comrade could not see or read anything," Mothlanthe said, referring to documents about the Gauteng Freeway Improvement Project which were handed over by Sanral to Cosatu under a court order in 2012.

The main intention of the upgrade was to decongest the road between the economic hubs of Johannesburg and Pretoria, Motlanthe said noting that a boom toll system would therefore make no sense in order to achieve this aim. "Once people get a proper explanation of the underlying intention, they immediately accept this is a necessary initiative," he said.

Amongst supporters of the e-tolling system, Motlanthe mentioned the South African Council of Churches and, said the council committed to use the pulpit on Sundays to communicate with their congregations on the matter.

Opposed
However, former president of the South African Council of Churches, the Right Reverend Dr Johannes Thomas Seoka, who only recently left this position at the council but remains the Anglican Bishop of Pretoria, said he was the incumbent at the time that such discussion occurred and said the council, as far as he was aware, never endorsed the e-tolls and were in fact opposed to it.

"The council took a stand and encouraged people not to pay, but it was because the government had not listened to us."

Gauteng roads and transport MEC and officiator of the event, Ismail Vadi, said despite the public outrage about the system, "no one can dispute we have a world class operating system". He described it as efficient and state of the art and said it demonstrates government's commitment to improving infrastructure and removing inefficiencies in doing business.

Motlanthe praised the road agency as being one of government's best agencies, noting "we have never had a whiff of scandal associated with Sanral".

Cosatu spokesperson Patrick Craven was not immediately available for comment.

Outa
Spokesperson for the Opposition to Urban Tolling (Outa) John Clarke, said the 1.2-million e-tags mentioned by Motlanthe referred to those who have bought e-tags as well as those who have registered alternate users – "it does not mean they have paid".

Clarke said Outa had encouraged people who wanted to follow due process to register their vehicles but to ensure Sanral was accountable and had billed correctly and provided proper verification before paying up. "We are holding them to their contract and saying 'give us proof'."

"With 3.5-millon motorists in Gauteng and 2.5-million using the freeways at 1.2-million they are only 50% there, it's appalling. No toll road can function on that thing," he said

Clarke said a source within Sanral had confirmed Outa’s suspicion that e-tag penetration was 29%.