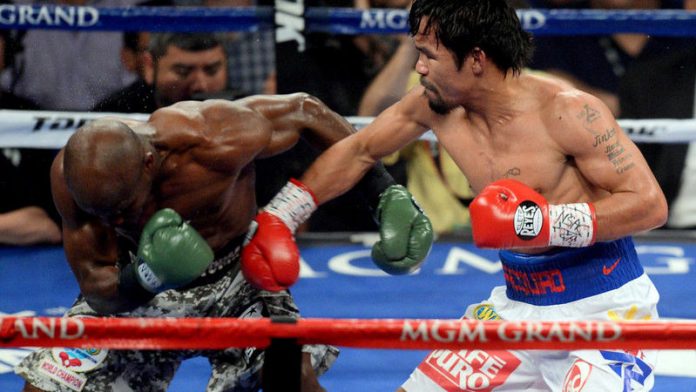 Filipinos jumped from their seats, raised their arms and burst into cheers as the country's boxing hero Manny Pacquiao regained his WBO welterweight title against American Timothy Bradley Jr in Las Vegas late on Saturday.

In cinemas, hotels, public parks and even army bases across the Philippines, people celebrated as Pacquiao avenged his defeat to Bradley in June 2012.

Bradley's victory over Pacquiao, two years back, was met by a chorus of boos from the crowd in Las Vegas after the shock split decision was announced, and promoter Bob Arum later described the judges as "The Three Blind Mice".

The Filipino southpaw went on to lose his next fight, a sixth-round knockout at the hands of Mexican Juan Manuel Márquez in December 2012 which prompted retirement talks.

"He's back," said a local boxing analyst who was giving a live blow by blow coverage of the 12-round title fight. "He's on his way to regain his superstardom in the boxing arena."

It was Pacquiao's second win after punching a unanimous decision over American Brandon Rios in Macau in November, where he brought cheers to survivors of Typhoon Haiyan in Samar and Leyte in the central Philippines.

The unanimous decision win on Saturday was the first loss for the American fighter.

Philippine President Benigno Aquino congratulated Pacquiao, a two-term congressman and a lieutenant-colonel in army reserve force, on his victory.

"He embodies the world-class qualities of the Filipino in many competitive fields," Herminio Coloma, the president's spokesperson, said in a statement, adding that the nation will give Pacquiao a hero's welcome when he comes back.

"In the face of successive calamities and challenges, the Filipino people have demonstrated their remarkable resiliency and steadfast determination to rebuild their communities."

In the eastern suburb of Marikine, hundreds stayed under the shade of trees to endure a sweltering high noon sun as they watched Pacquiao exchange punches with Bradley on a giant LED screen at a park.

"It's very clear Pacquiao was faster and stronger than his opponent," said Ruel Alal (50) who watched the fight with his neighbours. "He was fierce, he was determined."

Another spectator, Carmen dela Cruz thanked God for helping Pacquiao in his fight.

"Like Jesus, his boxing career has resurrected, I am proud of him not only because he is a good boxer but also because he has strong faith," the 60-year-old said.

Manila's streets were deserted before and during the fight as the Filipinos were glued to their television.