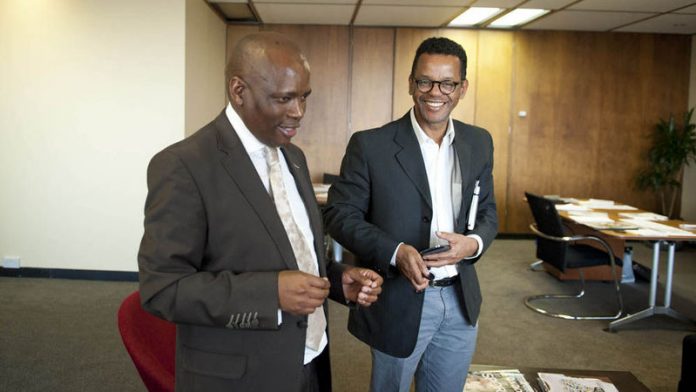 SABC boss Hlaudi Motsoeneng gave the broadcaster's acting news head Jimi Matthews a dressing down in front of staff this week at a meeting about leaks from within the corporation.

Motsoeneng, who is the SABC's acting chief operating officer, called a meeting on Tuesday with news staff and warned them they would face consequences if they leaked further information about shenanigans at the public broadcaster.

Motsoeneng was reacting to reports in both the Mail & Guardian and City Press that editorial staff members were "reminded" by the corporation's chairperson Zandile Ellen Tshabalala that their phones were being monitored by spies. This was because they were part of an institution that was declared a national key point.

Motsoeneng told staff that they were being "disloyal" to the public broadcaster if they leaked information about its operations.

The meeting got heated when Matthews tried to bring the meeting to a close. According to broadcasting sources, Matthews apparently said it was "nonsensical" to try to stem the leaks.

A furious Motsoeneng then gave Matthews a tongue-lashing, saying he did not have the authority to close the meeting, and later ordered him to his office to discuss the matter.

This is the latest round in a battle between the SABC's ANC loyalists and the news team who are fighting to preserve their editorial independence and integrity, and resisting political interference in their work in the run-up to the general election.

Senior SABC journalists drew up a resolution at a recent workshop in Kempton Park, at which they rejected direct or indirect interference by any political party in their editorial decisions.

Motsoeneng was apparently particularly upset that this resolution had been leaked to the media.

Election coverage
Staff had written they would provide fair, equitable and newsworthy coverage of political parties in the election run-up, as prescribed by the guidelines and policies. "We will not allow commercial, political or personal considerations to influence editorial decisions. We reject any undue attempts to influence decisions."

Election coverage must consider the need for thorough examination of the views, policies and campaigns of all the main political parties, they wrote. "Editors will always make decisions based on news values, and not political agendas."

Among Motsoeneng's concerns discussed at the tense staff meeting this week was the M&G report that the SABC's Tshabalala had warned staff in January that they should stop the leaks because they were working in a national key point.

Although Tshabalala and Motsoeneng denied this had happened, four journalists who attended the address by Tshabalala independently confirmed the story last week.

Motsoeneng could not be reached for comment about this week's dramatic meeting. SABC spokesperson Kaizer Kganyago responded with a text message: "I am unable to comment on the matter."

Yet Motsoeneng told the M&G last week that, at the staff meeting in January, they had discussed the issue of people who leak information about the SABC. "Every company has its strategy and they should not talk about our strategy outside of the SABC because clearly we will take action and we are not apologetic about it. People cannot go and talk about the SABC outside without following our channels."

Motsoeneng denied editorial interference with scripts. "I don't know why they say I read their scripts. No one has read a script for me. I interfere on the balance of the stories. I interfere if I see that the journalists did not do what they are supposed to do. My interference is to make sure the product is fair and balanced. But I don't go there to sit in the newsroom and say what sort of coverage they should have."

'Corrupt'
The journalists were also upset after they were recently told that the news departments would no longer cover "violence" sparked by service delivery or other protests.

This instruction is not something Motsoeneng tried to hide in the interview with the M&G last week. He explained that he had gone to address political parties and the Independent Electoral Commission (IEC) at the latter's head office earlier in the week, and brought up the matter at this forum.

"I was with SABC management. We were invited by Icasa [the Independent Communications Authority of South Africa] to talk to political parties. Parties that are contesting the elections were there. The political parties raised the issue about their coverage. But, remember, there are regulations that guide us from Icasa, which has pronounced in those regulations to say how many slots we should give the ANC and DA [Democratic Alliance], and other parties. We are guided by regulations," Motsoeneng said.

He added that he had informed the IEC meeting that the SABC would not be covering violent protests that might incite others.

Although public protector Thuli Madonsela recently released a report titled When Governance and Ethics Fail, and recommended the SABC board institute corrective action against Motsoeneng, he is still playing a leading role at the public broadcaster.

Meanwhile, Icasa's complaints and compliance committee adjourned a DA complaint case against the SABC until Wednesday evening. The DA laid the complaint after the SABC pulled the party's Ayisafani television election advertisement after airing it only three times.

The advertisement accuses the ANC under President Jacob Zuma of being "corrupt", having taken South Africa "backwards" and says that "more than 1.4-million people have lost jobs".