Khayelitsha cops: ‘We are the whipping boys’ 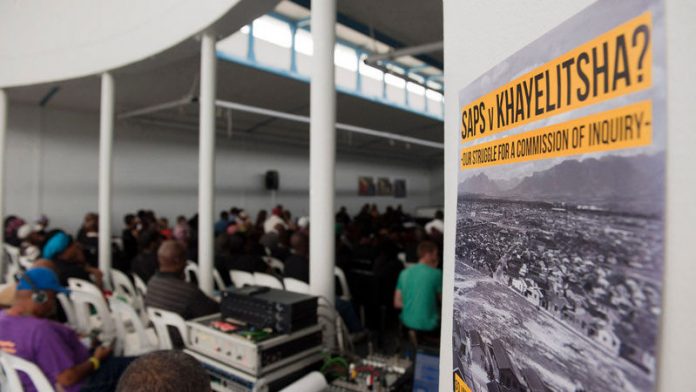 The O'Regan-Pikoli commission of inquiry is a timely and consolatory reminder of the judicial efficiency of which South Africa is capable.

Although a methodical, at times uneasy, process in which the collapse of Khayelitsha's law enforcement is being drawn out and laid bare, its hearings have proven to be neither an elaborate witch hunt nor a costly exercise in public shaming.

But the buck must stop somewhere, and so the commissioners and their evidence leaders have worked systematically through the South African Police Service (SAPS) chain of command from station and cluster level to the office of the provincial commissioner, Lieutenant General Arno Lamoer.

In a sober testimony on Tuesday 1 April, Lamoer made a telling admission: that there is "something fundamentally irrational" about the SAPS Resource Allocation Guide (RAG) – a document, revised annually by the national head office, which allocates personnel, vehicles and equipment to every station in the country.

With these words Lamoer put on record what the commissioners had already suspected: that, in calculating the resource requirements of stations in working-class areas such as Khayelitsha and Manenberg, the SAPS is severely undervaluing certain variables that compound police performance, like a lack of adequate street-lighting, road infrastructure, formal housing, water and sanitation.

'Strafstasies'
Khayelitsha's three SAPS precincts – Harare, Lingelethu West and Khayelitsha Site B – experience some of the highest contact crime levels in the country. In police slang they are known as "strafstasies": stations to which SAPS members are periodically redeployed as a form of punishment for misconduct or incompetence.

In 2013, national crime statistics showed that Khayelitsha as a whole had more reports of murder, sexual crimes, attempted murder, and assault with intent to do grievous bodily harm than any other cluster countrywide.

And yet, compared with Cape Town's more affluent, predominantly white suburbs where every building has road access and a street address, almost every home has a private security system, and the vast majority of reported crimes are hijackings and house break-ins, the police in Khayelitsha are generally under-qualified, lesser-ranked, ill-equipped and impossibly thin on the ground.

During the hearings in March, senior SAPS members gave insight into the daily trials of Khayelitsha's detectives. Colonel Johan Marais, the branch commander at Khayelitsha Site B, recalled how during one Friday evening, within the period of a few hours and with only two detectives on standby for murder cases, he and his officers were called to three separate murder scenes in one of the township's informal settlements.

Marais explained that a thorough on-site murder investigation requires a minimum of three hours. But when the crime has been committed at night, within an area of densely-populated informal housing without road access or adequate lighting, the process can take much longer.

By the Saturday morning, only one arrest had been made. By the Sunday morning, an additional four murders had been committed. Marais and his officers could not attend all seven autopsies because they took place in different places at similar times while other, more pressing aspects of the investigations were being prioritised.

Profiles were submitted to the Crime Intelligence Unit. Video footage was reviewed and community members were consulted before a second arrest was made on the Wednesday.

At any given time, the ideal number of murder case dockets per detective is said to be four. At Khayelitsha's three stations, it is not unheard of for a detective to be carrying over 100.

At SAPS Harare, from one month to the next, the branch's 66 detectives often carry over as many as 2 300 unresolved case dockets – of which hundreds relate to serious crimes – in addition to taking on 1 000 new dockets.

The commissioners have therefore acknowledged that the Khayelitsha police have little option but to adopt an informal system of triage, assigning degrees of urgency to the most pressing cases. The result is a spiral of knock-on effects which leads to cases being struck off the court roll, justice rarely being served, a heightening of the community's anger and distrust towards the police, and ultimately a rise in vigilantism.

Countless failures
But herein lies a fault line. While it is true that the Khayelitsha police are guilty of countless failures, how can their performance be accurately measured when the system itself necessitates failure?

By the letter of the law, if a warrant officer neglects his duty to report back to a complainant, or if a detective fails to deliver a docket to court on time, or if a station commander ignores the recommendations of the provincial inspector, he or she should, quite justifiably, be disciplined. But when the fulfilment of these duties far outruns what is humanly possible, a case can be made that disciplinary action itself is a misuse of time. Commissioner Justice Kate O'Regan, putting herself in the shoes of a station commander, summed up the problem: The detective does some very good work, messes up on some things, and then you say I'm just not going to discipline that detective; because although technically in terms of every SAPS rule I ought to, it would be unreasonable of me to treat that detective that way.

Perhaps unexpectedly, one of the commission's most striking achievements has been to show that the Khayelitsha police – in spite of their many, very real and often callous acts of misconduct and lawlessness – are themselves the victims of a much wider systemic problem.

"We don't dispute that we also lack somewhere," testified Brigadier

Zithulele Dladla, station commander at Khayelitsha Site B. "But the majority of our crimes are emanating from these shortages of resources … We chose the wrong job. We are the whipping boys."

Crucially, the failure to combat serious crime in informal areas implicates not just the policemen and women who confront it on a daily basis, but every level of the SAPS. Pretoria's "fundamentally irrational" distribution of resources is perhaps the clearest indication of this, along with Minister of Police Nathi Mthethwa's attempt to nullify the inquiry at the Constitutional Court.

And while the prosecutors and the courts have their own shortages and inefficiencies to account for, the criminal justice system as a whole still does not warrant the full brunt of the commissioners' scrutiny. For this reason it naturally suited Western Cape Premier Helen Zille to preclude four DA-governed bodies – the Metro Police, the Anti-land Invasion Unit, the City of Cape Town and the Western Cape provincial government – from the commission's mandate, despite the direct influence each of these has on safety and security in Khayelitsha.

Added together, these failures are devastating. Callousness, inefficiency and dehumanising neglect are what the people of Khayelitsha have come to expect from those responsible for protecting and governing them. If the police are scapegoats operating on the margins of the system, the residents are the outcasts of an exclusive society. – GroundUp