Will Malema’s revolution be co-opted by the system? 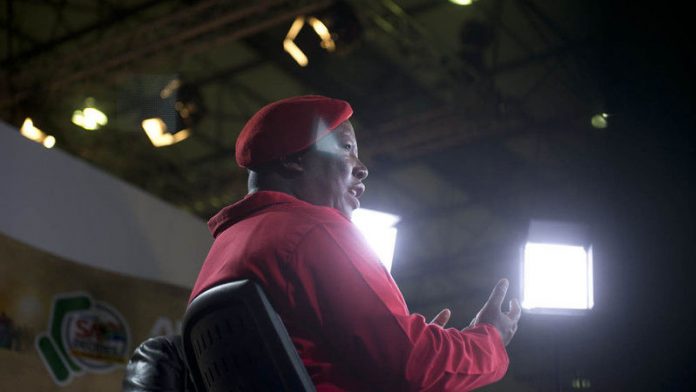 Julius Malema, like the rest of the Economic Freedom Fighters (EFF), was euphoric once the 2014 election results were counted on Saturday.

His equally euphoric spokesperson, Mbuyiseni Nldozi, carted me over to have a word with the commander-in-chief, as he is known, and I may as well have taken an elevator straight up to cloud nine. I haven’t seen Malema look that elated in a while: his cheeks balled up into a permanent smile and his eyes beamed.

The party had received 6.3% of the vote – astonishing work by anyone’s standards considering they launched just eight months prior with little resources.

Yet by his own standards Malema should have been grim.

In the run-up to the elections Malema and co had been strident: they were running to win and to govern, they repeatedly said. And implausible as it sounded to any sane pundit, it was the message they told their supporters over and over again.

Thankfully, Malema is the master of the political U-turn. From his support for Zuma to his stance on rape survivors, Malema can change his views more convincingly than anyone I know.

By Saturday, the idea of anything less than a win faded resolutely into the background as reality came home. A victory against the ANC in just one election was never going to happen, and the EFF should be more than happy with what they received and could grow from. Accordingly, the party’s messaging changed.

“We accept defeat and life goes on,” he said, adding that the party would govern one day. “We are all winners.”

Which is good news, at the end of the day, for the Independent Electoral Commission (IEC) – for a number of reasons.

We know the story of the IEC by now. The sterling body previously without spot or blemish has come under a cloud recently thanks to a botched leasing deal, resulting in tension among its top leaders. The scandal cast a pall over these elections and no one was more incensed about it than Malema.

Along with four other parties, the EFF went to the electoral court just before the elections, hoping to force IEC chair Pansy Tlakula to resign from running the elections because of her hand in the deal.

“You cannot separate the issues of maladministration and corruption on the [acquisition] of the property from having such acts happening during the elections,” Malema said in April, adding that her stepping down was “in the interest of the unity of this country, to avoid the possibility of civil war and disputed election results”.

Malema wasn’t just posturing. He really could ruin South Africa’s record of free and fair elections – quite legitimately – if he chose to do so. There is no such thing as a perfect election, even in South Africa, and look hard enough and you will find quite alarming discrepancies. It takes one party to cry foul loudly enough and their supporters will take to the streets.

“The credibility of elections is about losers,” political analyst Steven Friedman has previously told the Mail & Guardian, pointing out that if the losers did not accept the results, the election was in trouble. By the Friday of the elections week, the EFF had the reasons they needed.

Voting for Gauteng, which was the closest the ANC came to losing this election, slowed down dramatically as the ruling party hovered dangerously around the 50% mark, which the party considered highly suspicious. When the counting finally did come in, there were a series of discrepancies (though many of these were later cleared up). By the time most parties were aware of it, the deadline for objections according to the electoral Act had passed.

The EFF was angry. I watched Floyd Shivambu and Ndlozi grow increasingly impatient as they waited on the IEC results centre floor in the early hours of Friday morning, looking at the unmoving electronic board count for Gauteng. They hammered out a furious press release decrying the slow pace of counting in Gauteng, with some of their supporters taking to the streets to protest too. And they lodged an objection just before the deadline, demanding a recount of the entire province.

But by Saturday, some serious backroom chats had clearly taken place between them and those in the know. The EFF’s stance towards election discrepancies and indeed the ability of the IEC to run a free and fair election had been wholly moderated – if not entirely reversed.

“Whatever shenanigans they did, we accept. It’s part of the school fees you pay,” said Malema at a press conference at the IEC results centre in Pretoria on Saturday. “In the whole world there are no perfect elections. We have received complaints from people on the ground but it’s very important to leave those behind and move forward.”

It was a coup for the IEC – make no mistake. I saw one official jokingly ask the party’s head of election campaigns, Godrich Gardee, if he could throw away the party’s objection.

Gardee shrugged when I asked what had happened to the party’s threats of fire and brimstone.

“We can’t keep picking over small things,” he said, adding that the party couldn’t tear the country apart over these issues. “We don’t want to be another Angola or DRC.”

It’s a good thing for our democracy, that’s for sure. But what does it mean for a movement branding itself as revolutionary? I couldn’t help but feel that the party had had a taste for legitimate power, and had been co-opted into upholding the legitimacy of the institution that had given it to them. Even if the discrepancies during the counting was not that serious, Malema had brought much needed attention to other flawed aspects of our election process when he was outside the system, in particular the very problematic funding model for parties.

It turns out that institutional power can be incredibly seductive once your interests are aligned to it.

What next? The red berets go to Parliament, an institution even more sustained and dominating in its power. Will they be overwhelmed by the workload of law-making, which requires meticulous attention to detail and a very different energy to the work on the ground that has brought them this far? Or will they be seduced by their place in the house, the regular salary and the easy benefits? Perhaps they recognise both those challenges and send the right people to Parliament, those inclined towards detailed work, while continuing to ask difficult questions of our body politic even when it’s not in their interest to do so?

For our sakes, and the EFF’s, I hope for the latter.