In the shadows of Roger Ballen’s mind 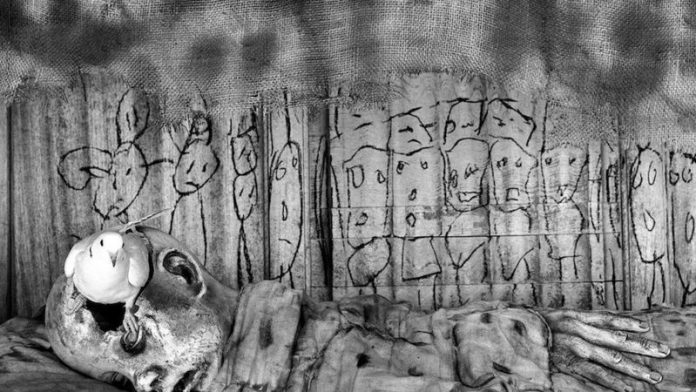 Roger Ballen is an intense guy. He does not do frivolous or light when it comes to his work. Having a conversation with him is hugely enjoyable but it is not easy.

I find myself looking down at the whites of my knuckles and I hold on for dear, dear life. I think about my wife and kids and realise I will never ever be the same.

Ballen, who is 64 and has published 12 photography books since Boyhood in 1979, returns to his life process throughout the conversation.

“It’s a pretty big job and we don’t have many years to do it. If by the end of my life I get 5% there I’ll be pretty happy. The issues are massive. Trying to come to terms with your own existence has always been the purpose of what I’ve been doing all these years.”

As a teenager in New York, Ballen remembers always being surrounded by photographs. His mother worked as an editor at Magnum, the international photo co-operative.

“She started one of the first photographic galleries in the United States. I was 14, 15. [Henri] Cartier-Bresson and André Kertész would often be at our house. We would collect their work, we had photographs and books lying all over the place. It was a part of growing up.”

When he was 18 his mother gave him a Nikon FTN as a high school graduation present. “I remember shooting out of there like a bullet with that camera,” he says. “I was ready to do that at an early age.”

Geology
Ballen ended up in South Africa after travelling for four years, which included a trip from Cairo to Cape Town, and was back again, after getting his PhD in geology from the University of California, Berkeley, in 1982. “I’ve always liked being outside,” he says. “I didn’t want to be inside an office. I like being with nature. I like the idea of finding treasures below the ground. I find the earth inspiring.”

It’s a beautiful paradox that he now spends his time photographing indoors, exploring his own psyche. But it was working as a geologist that enabled him to get to the remote mining towns in the then Transvaal, Eastern, Western and Northern Cape that defined his early work.

He still regards his second book, Dorps (1986), in which he focused on the unique aesthetics of South African towns, as his most important project. “It lay the foundation for everything else. I started using a square-format film camera, a Rolleiflex; it’s the same camera I use today.

“In Dorps I literally and metaphorically went inside. The pictures became much more psychological. I started working in people’s houses and I rarely ever took a picture outside again. I started using a flash and importantly found the motifs which I would expand and expand and expand to where I am right now.”

Platteland, his most controversial book, was published in 1994. In it he focused on marginalised whites, many of whom felt alienated by the massive changes the end of apartheid had ushered in. He was accused of exploiting his subjects.

“It’s how people defined my photography for many years,” he notes. “I still have no hesitation in saying that, while perhaps it reflected the inner psyches of a lot of white people, it really is a book about my interpretation and me trying to grasp various aspects of the human condition, aspects such as vulnerability, of not being able to deal with the chaos of our lives, of not having a say, of not feeling connected.

“It’s an important book because I became well known in some way or another and I began to take myself more seriously and began travelling with my work.”

Watershed
Outland (2001) followed. Ballen views the book as crucial. “I began to see myself as more of an artist, [to] take myself more seriously. There was this theatre of the absurd, where it was about this interaction between the subjects and me. This was important because it was no longer about documenting South Africa. It became an interactive process; this was a watershed.”

His next book Shadow Chamber began in a similar form to Outland until, while shooting the book, in about 2003, he says there was a major shift in focus in the work. “People’s faces, the documentation of the faces and portraiture disappeared and began to be replaced by drawings, sculpture and simpler installations,” he says.

This focus has continued into Boarding House and his most recent work, Asylum of the Birds.

He first came across the house featured in Asylum of the Birds in 2002 while working on Shadow Chamber. It is run by a person who has a great love for birds and animals. The animals share the space with people who find themselves on the edges of society.

The house is situated in the east of Johannesburg, surrounded by mine dumps, informal settlements and vacant fields. It operates as a stopping place for the residents, who can stay there for free if they have no work. But if they do find a job they are asked for a small rental.

“I kept going back and started taking interesting pictures of birds inside that place and outside of that place … I started thinking birds are a very interesting symbol [of] purity, peace, heavenliness. It’s interesting when they open their wings and they fly. It’s an interesting metaphor I work with … interacting with the place and my mind.”

Ballen says he never goes into a space with a preconceived idea or intention. “It’s always been about the process; you can’t predict the process, especially in photography. So much is about this moment. It comes together through movement and the movement is faster than you can blink.”

Asylum of the Birds is the first project he has had printed digitally from scans of his negatives, something he is excited about. For more than 30 years, his prints have always been done in the darkroom, another major shift for the photographer.

“It’s so much easier to work on the picture on your computer than in the darkroom. I’m still as excited about getting my contact sheets back now as I was 20 years ago. You never know what you are going to get. Sometimes you even forget what you did!”

Ballen is a man completely immersed – and wholly confident –in his work. “I like what I’m doing, I love it. I don’t want to get into a debate about what I’m doing, I just do it. It’s a compulsion. It’s an obsession. Ultimately it’s about me. Nobody can take pictures like me.”

Roger Ballen’s Asylum of the Birds is published by Thames & Hudson and is distibuted in South Africa by Jacana Media.