Awards: Who had the best election swag? 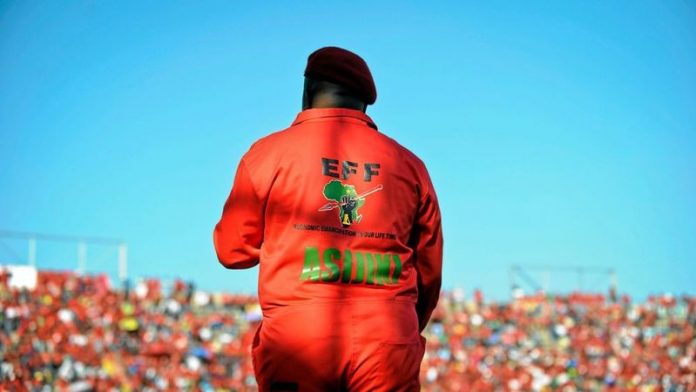 Singer Solange Knowles takes wild swings at her brother-in-law Jay-Z and it goes viral. Julius Malema does the same verbally with our own JZ and no one creates so much as a meme. Welcome to election 2014, where our politicians had to work harder than ever to be noticed.

So who had the best of the lot when it came to marketing swag these elections? We’ll be the judge of that. We give you the winners and losers of the battles of the political brands:

POSTERS
Best: NSPCA
Worst: DA
Our street poles may never be the same again, having borne the soggy and tattered weight of so many poster kids.

Jacob Zuma, Helen Zille, Julius Malema and more all smiled down at us from on high, instructing us to “Vote!”, “Register!” and, in one particularly confusing case, to “Win!”.

An iPad? A trip to Cape Town? An ugly blue shirt? It wasn’t clear, Madam Zille.

Singing the blues: The Democratic Alliance’s posters were judged to be the worst – almost as bad
as their ugly T-shirts. (Skyler Reid, M&G)

The posters weren’t much to write home about this year. The ANC’s was the most tactically brilliant. Zuma was cast into the background behind dominant text, as his party campaigned to similarly background him as a leader and encourage voters to support the party, not the problematic individual leading it. A whole series of “step up” posters didn’t even feature him.

But the best posters were by the enterprising nonprofit National Council of SPCAs (NSPCA), which pulled a publicity stunt by putting up posters beneath each political party’s head-and-shoulders shot, cunningly extending their torso and arms so they seemed to be holding a puppy. You’d be a monster not to love it.

Pooch power: The NSPCA’s ingenious campaign wins the prize for creativity, using the election to appeal for
support for the animal welfare organisation. (Hardyboys)

And the worst? The Democratic Alliance (DA) posters were so good, they were bad. They literally Photoshopped Gauteng premier candidate Mmusi Maimane’s pores away, and was it just us or did they try to make him look darker? Like the pseudo-Nelson Mandela accent he affects at rallies, chock-full of rolling Rs, it’s just weird. DA, please stop it.

FASHION
Best: EFF
Worst: Agang
You thought you knew Julius Malema. Then he put on a pair of red overalls and a matching beret, and suddenly he was some proletariat Left Bank hybrid who had 6.3% of the vote.

It may well be as simple as that when it comes to the success of the Economic Freedom Fighters (EFF). The red berets were a stroke of genius and though we still don’t buy the story that the party funded its intense eight-month campaign with the proceeds from sales, we do believe it gave it the greatest branding advantage this election.

In fact, the beret went beyond mere branding to serve as a stand-in for the party’s policies, its people and its very raison d’être in one simple and tangible image. Never mind whether it was genuine or not: it was cool. And in case you missed it, that’s the party’s secret weapon for getting away with so many contradictions.

Face off: Agang leader Mamphela Ramphele was voted one of the worst-dressed party celebrities,
but at least her marketing material served a purpose. (Clarissa Sosin, M&G)

Forget the ugly blue shirts or the kangas that placed Jacob Zuma’s face squarely on your bum. And don’t even start on Agang leader Mamphela Ramphele’s fashion missteps, which single-handedly won her party our worst fashion award: the ANC Women’s League green she wore to cast her vote.

The red berets win this round.

PROMISES
Best: EFF
Worst: AIC
Houses! Education! Unbelievably high pay for civil servants! The EFF leader’s promises flowed faster than the Moët & Chandon he guzzled in a previous life. The party wins the award for the best promises in a very roundabout understanding of “best”.

Let’s just say it’s great that there was no way they would win the election and actually try to start delivering on some of those promises. The ANC, poor things, were compelled to keep up with their expelled enfant terrible. They promised six million job opportunities and the DA upped the offer with six million “real” jobs.

And the EFF? Doubled social grants, a 50% salary increase for public servants, and millions and millions more jobs than the ANC has created thanks to “nationalisation and industrialisation”. Right.

And the worst promise goes to the party you’ve never heard of unless you really cared about the inclusion of the Matatiele municipality in the Eastern Cape rather than KwaZulu-Natal in 2005.

But we’re guessing that’s not why nearly 100 000 people voted for the über-conservative African Independent Congress (AIC). Rather, the three seats it obtained in the National Assembly came thanks to its very familiar name, its position on the ballot paper above the ANC and the healthy dose of black, green and yellow in its colours. And its promises? Yeah, we couldn’t tell you either.

SOUND BYTES
Best: EFF
Worst: ANC
A reporter’s personal nightmare: watching Malema speak and trying to tweet all the things he says. The man is a walking quote machine. He churns out headline-worthy one-liners like others used to sing monotonously about a machine gun.

“They said it would be cold outside the ANC but it’s very, very warm. How can you be cold when you are surrounded by one million people?” he asked euphorically after the elections.

And then there was his cheeky comeback to a journalist asking about his financial issues at the election results centre: “We’re not here to talk about sequestration … you must have a sense of occasion.”

He never uses notes, yet whizzes through subjects with increasing precision and an unerring flair for keeping his audience engaged in the driest of subjects.

Poor Zuma, on the other hand, has been cursed with the most unsympathetic speechwriters in the world. If they’re not sticking him with massive numbers to read out loud without spelling them out in full, they’re using the longest sentences possible. No wonder the party bled audience members at its final Siyanqoba rally once Zuma started speaking.

SONG
Best: ANC
Worst: Everyone else
One thing Zuma can do, though, is sing. Rebranding his image with the inspirational struggle song Yinde Lendlela rather than with the awful Umshini Wami was one of his best marketing moves.

No matter how demotivated his audience may be, they’ll rise up in song to join him on this one, which seems to hark back to a simpler time where the ANC was the moral authority and everything was coloured in sepia tones.

Sing this song and Zuma puts all other parties in the shade for those brief few minutes when a stadium full of voices swell up.

Which, really, is the power of marketing swag after all.