Turkey preps to end mine rescue, death toll at 301 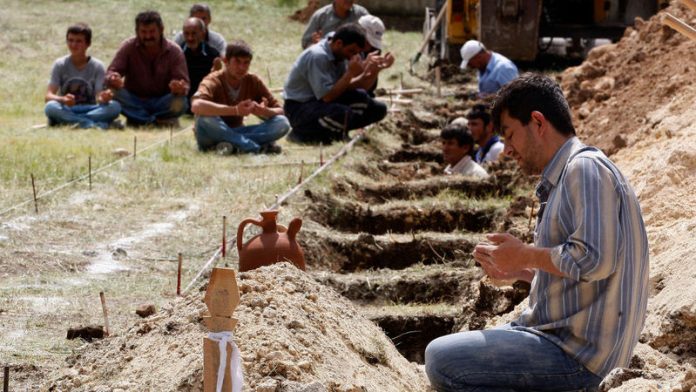 Rescue workers began winding up their operations on Saturday after finding the bodies of two more miners, believed to be the last remaining in the mine, bringing the death toll in Turkey’s worst industrial disaster to 301, the energy minister said.

Earlier a new fire broke out in the mine, hindering the rescue teams. Turkey’s Energy Minister Taner Yildiz said it had been extinguished and two more dead workers found. He said the numbers added up with the missing persons’ information provided by families.

“The newly discovered workers will be brought up and given back to their families. If there is no further demand to us and, the information we have backs that up, then we will have finished our search work,” he said.

But he said rescue teams would first conduct a final search throughout the mine before making a decision on ending the operation, four days after an initial fire sent deadly carbon monoxide coursing through it.

The disaster triggered angry protests across Turkey, aimed at mine owners accused of ignoring safety for profit, and at Prime Minister Tayyip Erdogan’s government, seen as too close to industry bosses and insensitive in its reaction to the tragedy.

Erdogan has presided over a decade of rapid economic growth but worker safety standards have failed to keep pace, leaving Turkey with one of the world’s worst industrial accident records.

The frustrations boiled over in Soma on Friday as riot police fired tear gas and water cannon to disperse several thousand protesters.

Detainees
Overnight, demonstrators clashes with police in the western port city of Izmir, some setting up makeshift barricades and throwing stones and fireworks aimed at the police, Hurriyet reported. About 40 people were detained.

There were also protests in Istanbul. Some residents in the city banged pots and pans from their windows, an act which was a feature of last summer’s nationwide anti-government unrest.

The police intervention in Soma could add to public anger towards Erdogan. He survived mass demonstrations and a corruption probe into his government over the past year to remain Turkey’s dominant politician, but now risks alienating conservative, working-class voters that form his party’s base.

University sit-in
There was wide media coverage of footage apparently showing Erdogan slapping a man as locals jeered his entourage when he visited Soma this week. The man, Taner Kurucan, said Erdogan had slapped him and told Kanal D TV he was then beaten by the prime minister’s bodyguards.

His adviser Yalcin Akdogan accused “gang members” of provoking Erdogan’s team as he went to meet mourning families. Anger was intensified by a photograph of an Erdogan aide kicking a protester held down by police special forces.

A group of students at the Istanbul Technical University occupied the mining faculty on Friday evening in protest at links between the university and the company which operates the mine – Soma Holding, the private Dogan news agency reported.

They said they would continue their protest until various demands were met, including a guarantee that the university’s links with the company were cut and the resignation of an academic there who said those who die from carbon monoxide poisoning “died sweetly”. He has apologised for his comment.

The mining company managers held a fractious news conference on Friday where they said an unexplained build-up of heat was thought to have led part of the mine to collapse, fanning a blaze which spread rapidly more than 2km under the surface.

Skimped on safety
Opponents of Erdogan blame the government for privatising leases at previously state-controlled mines, turning them over to politically-connected businessmen who they say may have skimped on safety to maximise profit.

Questioned on links between Soma Holding executives and Erdogan’s ruling AK Party, a mine executive confirmed his wife was a local AK Party politician. Company chairman Alp Gurkan said he had never met the prime minister before this week.

The AK Party said the formerly state-run mine at Soma, 480km south-west of Istanbul, had been inspected 11 times over the past five years. It denied any suggestion of loopholes in mining safety regulations. – Reuters