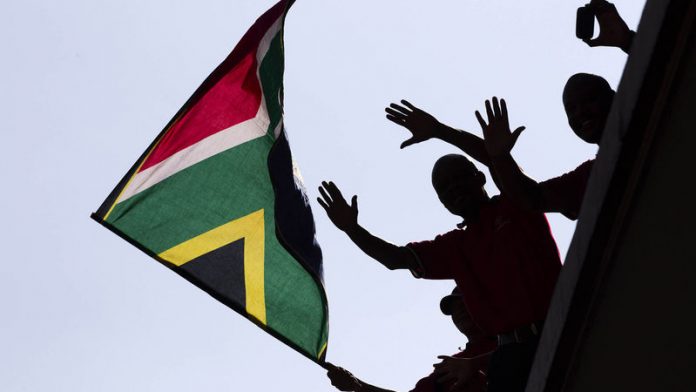 Top politicians, foreign dignitaries and members of the public flocked to the Union Buildings on Saturday from the early hours to be seated ahead of the inauguration of the re-elected South African president, Jacob Zuma.

“We’ve come so far,” former human settlements minister Tokyo Sexwale told the Mail & Guardian from his seat at the Union Buildings ahead of the inauguration. “The first time we came here, I was premier of Gauteng, and just before the inauguration serious bombs had gone off. We weren’t sure if this place was safe. Today [Saturday] there is no tension: security is done as normal. It’s now become business as usual and that’s a good thing.”

Sexwale was philosophical about his losing battle to dethrone Zuma within the ANC as part of a “change” faction motivating for his then deputy Kgalema Motlanthe to take his place at the party’s elective conference in Mangaung in 2012. “This is South Africa, this is democracy in real practice,” he said of his faction’s defeat. “Today I’m a guest of the president. Future generations should learn from this example.”

South African actors Kenneth Nkosi and Rapulana Seiphemo, stars of movies like White Wedding and Paradise Stop, were spotted waiting for the ceremony to begin.

“It’s my first time watching the inauguration,” said an excited Nkosi. “Twenty years ago I was watching it on TV with my mother at home in Rockville, Soweto. And now I’m here for this beautiful moment.”

Nkosi said he and Seiphemo loved politics. “Democracy is alive and loud in South Africa,” he said, listing some of this favourite comedic moments in the run-up to the elections.

“[Economic Freedom Fighter leader] Julius Malema goes and builds a house for Jacob Zuma’s neighbour in Nkandla. Then the ANCYL [ANC Youth League] say they’re going to renovate the house next door to Malema’s grandmother! Only in South Africa.”

Robust election campaign
Ministers in Zuma’s first cabinet were spotted arriving and taking their seats close to the stage.

Collins Chabane, minister for performance monitoring and evaluation in the presidency, told the M&G that the inauguration was the culmination of a robust election campaign and other processes. “It is a symbol of the strength of our democracy and the strength of our institutions. South Africans must now build on that.”

Chabane’s ministry is expected to be dissolved in the next cabinet, leaving his future uncertain. Asked what he was expecting from the Cabinet announcement that would follow the inauguration, Chabane laughed and said only the president knew. Nor was he excited. “How can you be excited if you’re in my position? But whatever happens, we’re ready.”

Meanwhile ANCYL convenor Mzwandile Masina was spotted deep in conversation with public protector Thuli Madonsela in the front seats of the amphitheatre.

Masina slammed Madonsela in March following the release of her report into security upgrades at Zuma’s private residence in Nkandla, calling her incompetent, arrogant, lacking in integrity and calling for her to step down. He was later reprimanded by the ANC while Madonsela only said the youth were in need of guidance.

‘I hope he will deliver‘
Masina is leading the party’s decimated league until it holds elections again after practically all its branches were dissolved when its former leader Malema was expelled, and went on to form his own party the Economic Freedom Fighters. EFF took home a respectable 6.3% of the vote these elections.

The opposition Democratic Alliance (DA) also made an appearance at the ceremony, which was set to debut under sunny skies, unlike the rainy 2009 inauguration.

New DA parliamentarian Phumzile van Damme said she was excited to be at her first presidential inauguration. “I wish President Zuma all the best in his second term,” she told the M&G. “I hope he will deliver much needed employment, especially for the youth and cut corruption. I look forward to challenging him and his Cabinet in Parliament if he does not.”

US ambassador Patrick H. Gaspard also wished Zuma well from the Union Buildings where he sat with other foreign diplomats and dignitaries. “I was blessed to serve as one of the Chairs for President Obama’s last inauguration, so I know how important these occasions are – and how hard they are to organize,” he told the M&G.

“I’m proud to participate in yet another historic day in South Africa. Inaugurations are always festive but they are also moments of public reflection where a nation can take stock of its accomplishments, but can also reaffirm a determination to take on remaining challenges. President Obama and the American people congratulate President Zuma and look forward to our continued partnership.”

The presidency was expecting 4 500 guests in the amphitheatre and 20 000 members of the public, according to a statement on its website ahead of the inauguration. The public were hosted on the south lawns of the Union Buildings where they were given a food pack with a sandwich, cool drink, a packet of chips and a fruit – a change from the 2009 inauguration when the public were given free Nandos meals.

But transport logistics to ferry members of the public to the union buildings from park and ride facilities in the city were delayed, with busses yet to arrive at 7am at the park and ride at the Tshwane Events Centre. Roads around the Union Buildings were closed.

Special guests however experienced speedy service at the Rietondale park and ride.