Comrades veteran back for more 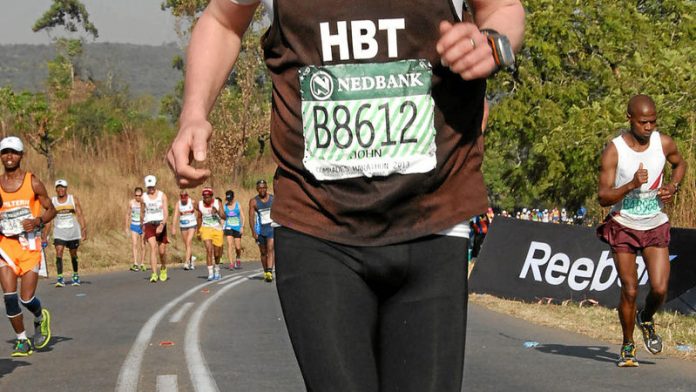 “Comrades is a race that gets under your skin,” says Scotsman John Sneddon. “The atmosphere throughout the race is second to none. You know when you’re out on that road that, if you get into trouble and you need something, anything, you’ll get it from another runner or the spectators.”

And Sneddon of all people should know. The 51-year-old psychiatric nurse from Edinburgh has completed every race since the Comrades first officially opened to international competitors in 1993. He earned his double green number in 2012 and will be running his 22nd Comrades on Sunday.

Sneddon first heard about the Comrades during the Athens Marathon in 1992. “The tour leader was showing somebody a route map of a race,” he recalls. “I asked to have a look, and I couldn’t figure out the distances, as I had never heard of ultramarathons. When he explained it to me, I dismissed it as being crazy – I couldn’t run that far, and as it was running in South Africa it didn’t seem like an option due the international ban being in place.”

But, by the time he returned home, the idea of doing the race was stuck in his head. “I thought that surely if 13 000 other people could do it so could I, and the ban had been lifted – so it began.”

Great leveller
But, for him, running the Comrades isn’t just about medals and times: “On that road, it doesn’t matter if the guy next to you has the big BMW or is struggling to afford his running shoes – at that moment, we’re all the same and we all do anything to help each other get over that line. That’s all that matters.”

He recalls an incident when he had a hamstring problem during one run and had people praying over his hamstring beside the road. “I’m not religious but just maybe it helped me finish,” he says with a smile.

But, running an overseas race for 21 years in succession also poses a financial challenge, he admits.

“Coming to Comrades has been a huge financial commitment if you count it all up. I’m no superstar so I have never been sponsored.”

But all things considered, it has been worth it, and he and his partner Isabel have even bought a small flat in Cape Town, to which they retire to post-Comrades for a month-long holiday each year.

“It’s been a price worth paying. I feel at home on that road as if it’s where I’m meant to be. I have met great people on the road and South Africa in general; I have made friends for life because of Comrades.”

Up versus down
Since the Comrades Marathon first officially opened its doors to international participants in 1993, many foreigners have won it. But according to coach Norrie Williamson, who has run 20 Comrades himself (with a best of 6.07 for 26th place in 1989), South Africans have a tendency to fare better in the down run whereas the up run tends to favour the foreigners.

“The down run is more brutal on the body than the up run because of the jarring and downhill. However, on the other side, it comes with the feeling of running home, and there are crowds to pull you through, at least to Westville, and again from the bottom of 45th Cutting,” he says. “The down is also considerably more forgiving of errors in pacing.”

Williamson, who has commentated on the Comrades for both television and radio, says that among the South Africans to watch is Ludwick Mamabolo, the 2012 winner, who will be keen to set the record straight, after initially being suspended on a doping charge but subsequently being found not guilty.

“He has had to come to terms with getting back into training and getting his head around the period of trouble. [But this] is another down run and I think he will be a real danger. It will be a late charge to the finish for him,” he predicts.

Last year’s winner, Claude Moshiywa, who has five Comrades gold medals under his belt should also be watched, he says, as should Pietermaritzburg boy Bongmusa Mthembu, who has consistently featured in the top five over the past few years. “He gets the most out of his ability and would be a popular winner,” he says.

“He may be young but he’s my choice as a surprise package – he has run the second-fastest 100km time of 6:18. His coach ran the Comrades back in the 1990s and that makes him dangerous as he will know about the course and pacing. This man has extended speed and will be well primed.”

On the women’s side, local competitors to watch out for include past winners Charné Bosman (who was placed fifth last year) and Riana van Niekerk, as well as Melanie van Rooyen and Kerry Koen, who were placed eighth and ninth last year. Zimbabwean runner Tabitha Tsatsa is also an experienced international marathoner who, with a 2:29 best, is almost as fast as Russian twins Elena and Olyesa Nurgulieva, who finished first and second last year, Williamson says.

“She [Tsatsa] has a good head and won the Two Oceans in 2013. This move to Comrades could be very useful if she watches the pacing and runs within herself to Cowies [Hill]. It could easily be an African winner for the women, which will be special.”

But ultimately the Nurgulieva twins will be the ones to beat, he concluded. “They have the experience and the speed, but they also seem more prone to injury and illness. But on a form day they are extremely hard to beat.”