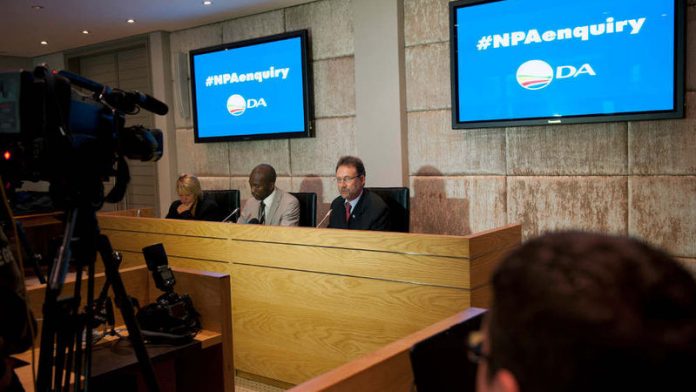 The party wants Parliament’s oversight committee on justice to hold a full inquiry into Nxasana’s appointment and tenure, a process in which the former justice minister Jeff Radebe, President Jacob Zuma’s lawyer, Michael Hulley, and Nxasana would be called in to give evidence.

The DA will also seek terms of reference that the inquiry should recommend amendments to the procedure for appointing future NDPPs. The head of the National Prosecuting Authority (NPA) is required by law and the Constitution to be a fit and proper person, with due regard to his or her experience, conscientiousness and integrity, and is appointed by the president.

“Yet recent allegations in the media around Mr Nxasana raise serious concerns, not only with regard to the process followed in appointing this national director, but also with regard to whether the NPA is being abused to advance political ends,” said newly elected DA parliamentary leader Mmusi Maimane.

Pushed into a corner
Maimane said that under Zuma’s administration, the national director appears to be forced to defend their position politically rather than uphold the rule of law.

He said the DA was concerned that once more a national director is being pushed into this corner, with reports that Radebe verbally demanded his resignation before the May 7 general elections. “This comes after national director Nxasana has permitted the resurrection of charges against President Zuma’s ally, Richard Mdluli, and is rumoured to be considering reinstituting the 780-odd charges of corruption, fraud and racketeering against the president himself.”

Former prosecutor Glynnis Breytenbach, who is now a DA MP, said Nxasana appears to have a lot of support among the NPA staff on the ground. She told journalists that prosecutors held the view that Nxasana was doing a good job and that he was trying his best. “I am yet to speak to anybody who is dissatisfied with him. They do hold a view that this is a red herring and they do think that it is about Mdluli, among other things,” she said.

Breytenbach added that from what she had heard, the level of morale among the prosecutors was at an all-time low. “They cannot tolerate another period of an acting NDPP because the last one was quite horrendous. The level of morale is concerning.” She said the belief was that the new allegations are a red herring to get rid of Nxasana.

Proposed procedure
DA federal executive chair James Selfe said the party will propose a model whereby before making the appointment, there is a procedure that allows for the interrogation of applicants and for the public to be satisfied that the person appointed has the requisite skills and integrity.

“If we can get that procedure right, then it would do a great deal to both the integrity of that department and to dispel any myths of political interference in the prosecution process,” he said.

The DA announced that the Supreme Court of Appeal will hear the appeal against the high court in Pretoria’s judgment to hand over the spy tapes. This will be to obtain an order to compel the NPA to comply with a high court order that they hand over the tapes to the DA.

The appeal court will hear this matter on August 15.

This has been a five-year battle to test the rationality of a decision taken in April 2009 to discontinue Zuma’s prosecution. The DA obtained an appeal court order that forced the NPA to hand over the reduced record of decision, but that order was summarily ignored in 2012.

“We find it ironic and unfortunate that while we are using essentially donor money to get to the truth of this matter, in each and every one of these court actions, the president relies on the state attorney and funds these appeals using the taxpayers’ money. It is the most unfortunate state of affairs, because really if there is nothing to conceal, there should be no reason why those tapes and the associated memorandums should not be handed over,” said Selfe.