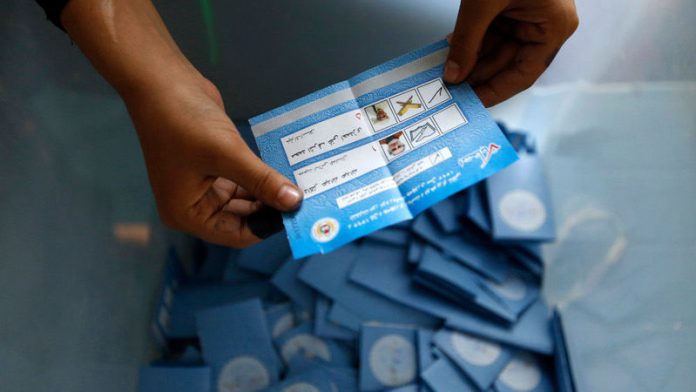 Afghans braved threats of violence and searing heat on Saturday to vote in a presidential runoff that likely will mark the country’s first peaceful transfer of authority, an important step toward democracy as foreign combat troops leave.

The new leader will be challenged with trying to improve ties with the West and combatting corruption while facing a powerful Taliban insurgency and declining international aid.

Despite a series of rocket barrages and other scattered attacks that Interior Minister Mohammad Umar Daudzai said killed 46 people, the voting was largely peaceful. Independent election commission chairperson Ahmad Yousuf Nouristani said initial estimates show that more than seven million Afghans voted, which would be equivalent to the first round on April 5. That would be a turnout of about 60% of Afghanistan’s 12-million eligible voters.

Abdullah Abdullah, who emerged as the frontrunner with 45% of the vote in the first round, faced Ashraf Ghani Ahmadzai, an ex-World Bank official and finance minister. Neither garnered the majority needed to win outright, but previous candidates and their supporters have since offered endorsements to each, making the final outcome unpredictable.

The two men differ more in personality than policy. Both promise to sign a long-delayed security pact with the United States. That would allow nearly 10 000 American troops to remain in the country for two more years to conduct counterterrorism operations and continue training and advising the ill-prepared Afghan army and police. And both pledge to fight for peace and against corruption.

“I voted today for my future, because it is still not clear – the country is at war and corruption is everywhere and security is terrible. I want the next president to bring security above all and jobs,” said Marya Nazami, who voted for Ahmadzai.

The White House praised Afghan voters for their “courage and resolve” in the second round.

“These elections are a significant step forward on Afghanistan’s democratic path,” it said. “We look forward to working with the next government chosen by the Afghan people.”

The Taliban intensified attacks ahead of voting and warned people to stay away from the polls, but the Islamic militants failed to disrupt the first round. They stepped up attacks again ahead of this round, including an assassination attempt that narrowly missed Abdullah just over a week ago.

Outgoing President Hamid Karzai, who has grown increasingly alienated from the US during his two terms in office, had refused to sign the deal.

Iraq’s Shiite-led government had discussed the possibility of a residual US force, but the two sides were unable to reach an agreement.

“Iraq is burning,” said shopkeeper Abbas Razaye after voting in a mosque in western Kabul. “We need the foreign troops for the time being. Otherwise our history of civil war will repeat itself and Afghanistan will deteriorate even more than Iraq.”

Voter Sayed Qayyum agreed the pact should be signed. “I am afraid if it isn’t signed then Afghanistan will face the same fate as Iraq,” he said.

Abdullah
Abdullah (53), whose mother was a Tajik, draws his support mainly from that ethnic group although his father was Pashtun. During the Soviet occupation of Afghanistan, he served as adviser to and spokesperson for Tajik warlord Ahmad Shah Massoud, who was assassinated by al-Qaeda two days before the September 11 attack in 2001.

Later that year, Abdullah became the face of Afghanistan’s anti-Taliban movement after the US toppled the Taliban government, giving frequent news conferences to international journalists. He served as foreign minister and then was the runner-up in Karzai’s disputed re-election in 2009.

His supporters praise him for staying in the country during the civil war and fighting the Taliban, as opposed to Ahmadzai, who lived in exile and at one point even had US citizenship, which he gave up for his own failed bid against Karzai five years ago.

“Abdullah was always among the Afghans inside Afghanistan,” said restaurant owner Mohammad Nahim, who cast his ballot in western Kabul. “Abdullah can bring peace and improve the economy.”

Ahmadzai
Ahmadzai, a 64-year-old, US-educated Pashtun, has gained the support of the country’s largest ethnic group, particularly in the Taliban heartland in southern Afghanistan.

“According to our will, Ashraf Ghani is the best candidate and the rightful leader of our country,” said Abdul Saboor Zamaria, who works for a non-governmental organisation in the southern city of Kandahar. “If Abdullah Abdullah is made our leader, more mistrust and rage will spread in our country and violence will keep increasing day by day.”

Unlike the previous round, when long lines and ballot shortages prompted authorities to extend the voting, polls closed on schedule and electoral officials began tallying ballots. Official preliminary results were to be announced on July 2, with final results released on July 22. Nouristani said his commission would release partial results in the coming weeks.

Karzai, who has led the country since the US invasion and was constitutionally barred from seeking a third term, cast his ballot at a high school near the presidential palace. Many analysts say his decision to step down peacefully will be one of the major successes of his otherwise troubled legacy.

“Today your vote will lead Afghanistan toward a better future, better government and a better life,” he said to his countrymen. “Afghanistan is taking another step forward in a transition toward security, progress and stability.” – Sapa-AP