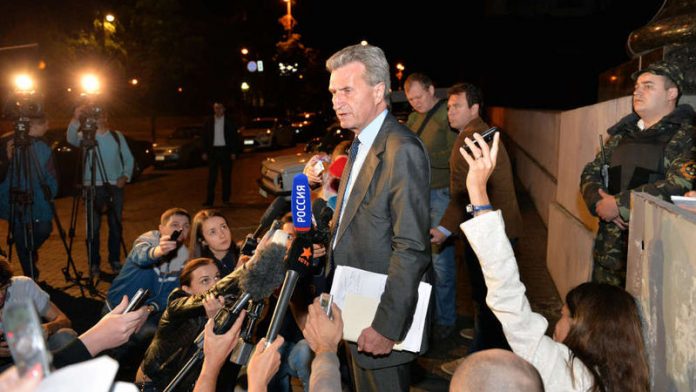 Europe faced gas supply disruptions on Monday after Ukraine failed to broker an 11th-hour deal with Russia in a feud that has stoked the worst East-West crisis since the Cold War.

Ukraine hosted the last-gasp talks hoping to keep an energy shortage from compounding the new pro-Western leaders’ problems as they confront a two-month separatist insurgency threatening the very survival of their ex-Soviet state.

But Russia’s state gas firm Gazprom said it had switched Ukraine to a pre-payment system at 0600 GMT – a move that effectively halts all shipments because Kiev has not forwarded any money for future gas deliveries to Moscow.

“If we receive no pre-payment by 10:00 am (0600 GMT), then we obviously will deliver no gas,” official Gazprom spokesperson Sergei Kuprianov told AFP.

Gazprom added in a statement issued once the deadline had passed that “according to [our] provisional invoice, no payments for June were received”.

Gazprom added that it had notified Europe of possible gas disruption and has now lodged a $4.5-billion lawsuit against Ukraine with an arbitration court in Stockholm.

The third “gas war” between Russia and Ukraine since 2006 flared when Moscow nearly doubled its rates in the wake of a deadly winter uprising that pulled Kiev out of the Kremlin’s historic orbit for the first time.

Ukraine receives half its gas from Russia and transports 15% of the fuel consumed in Europe – a reality that prompted EU energy commissioner Guenther Oettinger to urgently step in and try to break up the feud.

The European Commission said Oettinger had offered a compromise that would see Kiev pay $1-billion on Monday and the rest of the debt in instalments stretching through the end of the year.

Oettinger also proposed that Ukraine accept the $385 figure demanded by Putin in the winter and see its rate drop to $300 “or a few dollars more” during summer months.

“The Ukrainian side was ready to accept this, but for the moment the Russian partners were not,” the European Commission said in a statement.

“The Russian side insisted on immediate payment of $1.9 billion, and an overall price of $385.” The gas talks were further clouded by a new diplomatic row that exploded after Ukraine’s acting foreign minister called Putin “a prick” while trying to restrain protesters who attacked Moscow’s embassy compound in Kiev on Saturday.

‘Hands off Ukraine’
Nationalists with signs reading “Kremlin – hands off Ukraine!” tore down the embassy’s Russian tricolour while others smashed its windows and overturned diplomats’ cars.

Ukraine and the West accuse Russia of supplying rocket launchers and even tanks to the insurgents in a bid to break up its western neighbour following the February ouster of a pro-Kremlin regime.

The embassy protest came in response to the deaths of 49 servicemen killed on Saturday when pro-Kremlin rebels downed their military transport plane with weapons Kiev believes were supplied by Moscow.

Acting Foreign Minister Andriy Deshchytsya put himself in the crosshairs of the diplomatic spat by being filmed being telling protesters “Putin is a prick” in a bid to calm the seething crowd.

The insult has become something of a catchphrase for pro-Kiev Ukrainians after it was chanted by local football fans at a match and then went viral on the internet. But Deshchytsya’s comments became headline news in Russia and the anger among senior Moscow figures was palpable.

Deshchytsya “allowed himself to make comments that cross all lines of decency”, said Russian Foreign Minister Sergei Lavrov. “I do not know how we are going to work with him from now on.”

Kiev media speculate that Deshchytsya’s days as Ukraine’s top diplomat may indeed be numbered because Poroshenko intends to name his own close associate to the post in the coming days. – AFP