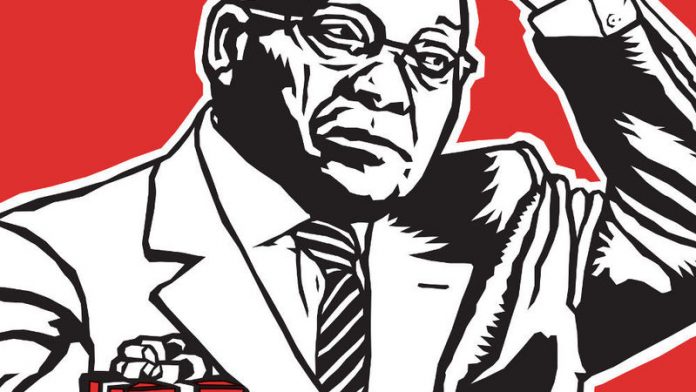 What does this government really stand for? Tuesday’s State of the Nation address gave few, if any, clues, and left ANC MPs strangely deflated.

Who would have guessed that the ruling party had just received a decisive fifth successive mandate to rule?

President Jacob Zuma looks every bit the part – that is, of a lame duck leader. It is extraordinary how fast his power is evaporating.

Second (and final) term presidents always face this problem but this one has entered the danger zone remarkably quickly.

Zuma’s speechwriters do him no favours. In February, there was at least something of a narrative thread, with the neat refrains about there being a “good story to tell” and “South Africa being a better place to live than in 1994”, which raised spirits on the ANC benches in Parliament.

Tuesday was a return to the formulaic blandness that has characterised his five other addresses.

After his first, a new Cabinet minister remarked to me as he filed out of the National Assembly that he “did not miss the poetry” – a surly reference to Thabo Mbeki’s predilection for quoting Yeats.

No, what one is looking for is political and ideological coherence from the top of the administration and, therefore, of strategic intent. It is, in a phrase, “the vision thing”. Or, rather, in this case, the lack of one.

So, as ever with Zuma, one needs to look behind the speech and read between the lines to get some sense of what lies ahead and of the balance of power in his Cabinet.

Yes, there was the essential statement about the economy being centre stage – at least someone had the good sense to say so, although it is unlikely to be enough to satisfy the many doubting Thomases who populate the institutions, consultancies and think-tanks whose job it is to evaluate South Africa’s current zeitgeist.

The big and necessary focus on energy was welcome, too. These were the right noises. But they were unconvincing.

Why? Partly because of Zuma himself and his lack of credibility. When he speaks of a new energy mix that includes nuclear, all one can see is a new arms deal, with Zuma and the ANC lining their pockets with rubles.

Partly, too, because of the absence of fresh thinking. With the odd exception, this was a reassembly of the “same old” – with the laughably empty slogan of “radical socioeconomic transformation” exposed as a tawdry attempt to match the call of the Economic Freedom Fighters leader, Julius Malema, for “economic freedom”.

Stability and continuity are well regarded by those who value good governance. Avoiding a lurch to the populist right is one thing but when, in the face of a bleak economic outlook and growing socioeconomic instability, a government appears unable to think on its feet, as it were, then the impression that is created is one of slumber and stagnation.

Tuesday’s State of the Nation address began with the insipid reaffirmation of the view that it is the government’s “strong belief that the most effective weapon in the campaign against poverty is the creation of decent work, and that creating work requires faster economic growth”.

Accept for a moment that what is needed is greatly increased investment in the economy. Assume also that this requires the arrest of current negative market sentiment. What would be the key signals and messages that Zuma needed to deliver?

First, clarity about how the National Development Plan (NDP) is going to be implemented, and a clearly articulated implementation plan to resolve the contradictions within it quickly.

The NDP offers a long-term vision from which the investment community, who regard it as essentially “business friendly”, draw comfort, despite the fact that it is nothing more than a piece of paper at the moment.

Second, some “new realism” about the creation of employment generally and labour market inflexibility specifically, because the investment community essentially believes that this government has run out of ideas and is too often held to ransom by the trade union movement.

In short, on the basis of many conversations I have had with international investors and emerging market analysts in South Africa and London in recent months, there has been a significant drop in confidence in South Africa’s ability to address its most serious problems.

Third, a government that is up to the task of tackling corruption and inefficiency in the public sector. And, on this, Zuma’s address was feeble.

The harsh reality is that the government will only begin to sound convincing when Zuma goes – however he does eventually go. One is reminded here of the old aphorism that Nelson Mandela once quoted, namely that there are only two ways out of politics: death and failure.

How did Zuma do on this three-legged scorecard? Well, the NDP got barely a mention and there was no indication of what the government’s priorities will be in its eagerly awaited next five-year medium-term strategic framework, which is supposed to guide the first part of NDP roll-out.

Why? Because of the absurd game of musical chairs that was the appointment process for the new Cabinet, with ministers old and new, senior and junior, kept waiting through the night – in some cases almost until dawn on Sunday May 25 – to be told they had been promoted, fired or moved sideways.

This completely foolish and unnecessary shuffling of the pack, with the gratuitous restructuring of ministries and departments, has destabilised the government at precisely the worst moment. It can’t hit the ground running. Instead, it is staggering over the starting line.

Without a strong team of close advisers, Zuma is even more dependent on his Cabinet members to write the State of Nation address, so it inevitably ends up as the proverbial horse designed by a committee – namely, a camel.

The only real winners in this self-defeating process were the two members of the economic policy cluster who retained their positions – Trade and Industry Minister Rob Davies and Economic Development Minister Ebrahim Patel, whose fingerprints were all over this address.

For the time being, the balance of power has shifted in their direction. Good luck to them.

Lindiwe Zulu’s appointment as minister in the new department for small business was potentially the best new Cabinet appointment.

She is tough, talented and clear-minded, and she will give Davies and Patel a run for their money in the economic cluster.

But it was too early for her to have made her mark, so there was nothing in the address to indicate that life will be made easier for small business.

Still, it is worth taking a step back. This critique is premised on the idea that the government wants investment in the economy, that it cares about what the international investment community thinks about its stewardship of the economy, and that it believes the private sector is a part of the solution and not just part of the problem.

The Zuma government talks this talk, but there are pushes and pulls in both directions within the Cabinet, just as there were in Zuma’s first term. One faction (most obviously, Patel and Davies) pulls to and beyond the social-democratic line, with a deep and almost neurotic ill disposition towards the private sector.

Another faction tries to hold the moderate middle ground (think Pravin Gordhan and his successor at the treasury, Nhlanhla Nene), and a third pulls to the nationalist, populist right, whose preoccupation is in increasing black ownership of lucrative bits of the economy (Ngoako Ramathlodi is the exemplar here, which makes his appointment to mineral resources the political equivalent of throwing Luis Suarez into a crowd of Ghanaian Black Stars fans).

At its heart, then, this is a government in which there are very different attitudes to private profit and, therefore, profound ambiguity about the character and type of economy that it wants to create.

It takes us back to the vision thing and the uncertainty about what this government fundamentally stands for – and, thereby, to Zuma’s “big tent” politics and his own ideological vacuity, and, behind all that, to the ANC’s own historical ideological contradictions and the contest between its socialist and nationalist tendencies.

The big problem with Zuma is not that his personal finances are “complex”, that he reads his speeches badly, or that his presidential kitchen Cabinet is obviously not up to the task of supporting and guiding him. It is that he is unwilling, or unable, to handle the implications of this fundamental tension in the ruling party and his Cabinet.

Until Zuma goes, South Africa’s government will continue to be flotsam buffeted this way and that on the tides of an uncongenial global economy.

Richard Calland is the author of The Zuma Years (Zebra)