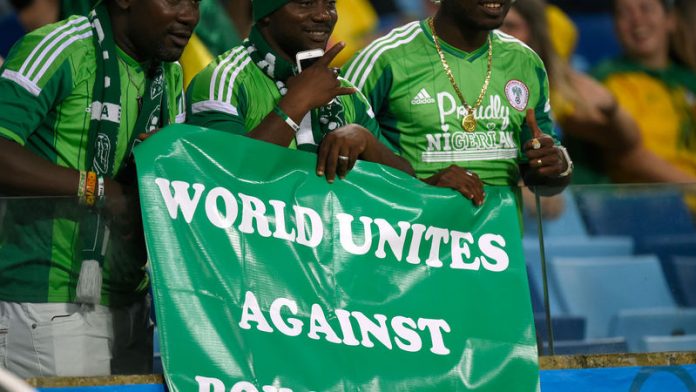 Gunmen stormed Sunday services in four villages near Chibok in Borno state where Boko Haram kidnapped more than 200 schoolgirls on April 14. They hurled explosives into churches, torched buildings and fired on worshippers as they tried to flee, residents said.

“So far we have 54 dead,” said a Borno state official, who requested anonymity as he was not authorised to discuss casualties with the media.

A local leader in Chibok, who also asked that his name be withheld, said residents had discovered at least 47 bodies in the surrounding bushland, but told AFP the search was ongoing and figures were still being collated.

Federal government spokesperson Mike Omeri confirmed on Monday that “a number of people were killed” but said he had not yet received an official casualty report from the local government and could not discuss specifics.

Locals have accused the military of ignoring distress calls made after the attack began, leaving them defenceless during the attack, but Omeri said: “I was … reliably informed that the military and the airforce were there. Maybe a little late, but they made it there.”

The Chibok leader challenged the government’s version of events, saying the military “did not attempt go” to the scene of the attack. “Anybody who tells you the military went there is lying,” he said.

In the week following the April abductions, Chibok residents accused the security forces of doing almost nothing to secure the girls’ release, despite military claims that a massive manhunt had been launched.

The United States, Britain, France and Israel are now supporting Nigeria’s search-and-rescue operation, but there have been no signs of success so far, with 219 girls still missing.

Church attacks have been a prominent feature of the insurgency, which Boko Haram claims is aimed at creating an Islamic state in Nigeria’s mainly Muslim north.

Nigeria’s Super Eagles face France at 6pm, their first appearance in the tournament’s knock-out rounds since 1998. But the relentless Boko Haram violence has muted preparations ahead of the kick-off, even in Lagos, the commercial capital, nearly 2 000 kilometres from the scene of Sunday’s violence.

“This is the southwest …We are free (of Boko Haram violence) here,” said Binuyo Lewis (35) who manages a bookmakers in the busy Obalende market in the upmarket Ikoyi neighbourhood of Lagos, where a gleaming green and white of Nigeria dominated an otherwise crumbling facade. But, he said, “we are worried about our brothers in the northeast”.

Boko Haram are blamed for killing thousands since 2009, but the first half of this year has been the bloodiest stretch of the insurgency, with more than 2 000 people killed.

A year-old military offensive in the northeast has done little to stem the unrest.

Expatriates in Lagos and the capital Abuja, hit by three bombings since mid-April, have been warned to stay away from bars and so-called “viewing centres” showing Monday’s match. But for most football fans in the energy-starved country, viewing centres are the only option to see the Super Eagles play.

Nigeria, Africa’s top oil producer, has rolling power cuts every day and only a small fraction of the population can afford a generator needed to run a television when public electricity is switched off. – AFP