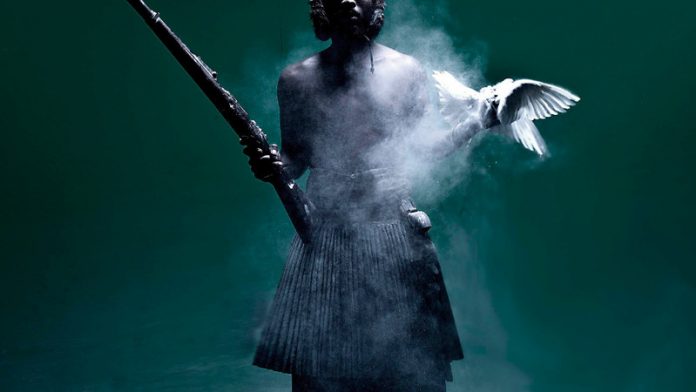 It is interesting to see what critics have written about Mohau Modisakeng’s exhibition Ditaola, currently showing at Brundyn+ gallery. That he is an artist originally from the “dusty streets of the informal settlements” of Soweto. That he grew up in a place ripped apart by poverty and violence but managed to graduate from the University of Cape Town.

This is almost the standard way of introducing a black artist to the contemporary art world public: to satiate the “benevolent” art establishment, an emotive story about one’s decrepit milieu has to be whipped up so as to give the creative class a sense of depth.

This fixation with black artists’ biographies not only compromises the work but also tends to serve very ignorant wishes.

Modisakeng’s art has graced the most prestigious places with work that makes one pause, reflect and relish. Ditaola in Setswana means divination, but the show seeks not to enlighten us about the probability of the future. It questions it. How do we begin unfurling narratives, practices and visions of and about the future, when the past and present are suffused and smothered in a continuum of impossibilities? How do you begin to reconcile or bury your hatchet (or pistol) if peace is both elusive and dissuasive?

As Modisakeng has repeatedly remarked, his work reflects on narratives of trauma, violence and race but not in any direct autobiographical sense. That isn’t to say he suspends his personal experience: rather, he locates it within a larger frame of black existentiality.

This double meaning runs pervasively through Ditaola. He substitutes, displaces and consciously conflates historical experiences between personal and collective. But the substitution happens at multiple levels simultaneously through the artist’s body and in the body of work.

In the photographic series, we see Modisakeng’s body present and central in animated poses, captured in relatively different performative times. Gracing almost all corners of the gallery, Ditaola shows the artist superimposed on a green substrate, with a pistol and a dove – a rather more oxymoronic than unlikely situation.

The photographic rendition of the figure resembles the iconic, but problematic, representation of African militia and men in general; that is, not only as subjects with an avaricious propensity for violence but also caught in an existential identity between being human and subhuman.

The series begins with the figure and pistol, but immediately morphs into a performative and surreal situation taking place between the figure, pistol and dove. The lightness of the bird on the steel and dark pistol, restless and precarious, and then its back-and-forth flight to and from the gun and frame in different intervals, raises questions about uncertainty.

Most importantly it raises the one-sided burden for reconciliation, while black subjugation continues unabated.

A shadow of nothingness
It is no surprise that whenever the bird takes flight from the figure it leaves a sublimating white powder that threatens to whiten the entire frame. The whiteness, which permeates the frame, in turn helps to evaporate the figure into a shadow of nothingness. This essentially alludes not to betrayed or unfulfilled promises of peace but rather the problematic nature, if not impossibility, of the promise itself.

Though the images are characterised by violent presuppositions, implicitly Modisakeng’s Ditaola images lull us with unspoken grammars of pain, melancholy and silence. Though we can abstract from his images, sculptures, videos and installations’ fixed implications, their embedded visuality sometimes escapes the ease that comes with literality. This we see clearly in his installations, especially Rickshaw, Trumpets and Fence.

In the main room of the exhibit, Modisakeng mounts a huge structure resembling a cowshed, a kraal more than just a fence securing an empty plot. Assembled with black-painted Victorian-style steel gates, while inside, anchored by long white-painted wooden poles and two unpainted wooden frames at its opening. The last time we saw a kraal-like ensemble was with Nicholas Hlobo’s Umthubi and Themba Tsotsi’s kraal. Unlike the latter’s more sensitive, perhaps unstable construction, Modisakeng’s has a military and hypermasculine sensibility.

There is firmness and synchronicity in its form, but by way of contrast, a softness and lightness tones down its macho feel. Inside, there is a spotless floor that greets us with its emptiness.

Is the artist alarming us with the old cry from IWW Citashe’s classic poem The Cattle Have Gone? Here, Fence and Kraal are analogous. The experience of fencing so-called empty land, and looting the wealth of what was a thriving society, speaks to the history of our country.

Today the neocolonial form of terror loots on behalf of the master, in similar ways as the old colonial regimes. The continuing violence of arbitrarily fencing and emptying poor people’s wealth should be read into this narrative, albeit more dynamically.

Ditaola shows Modisakeng’s visual and conceptual capacity, compelling us to think of its assumptions more critically. However, with all the heaviness that it brings, it’s almost impossible to resist the charming aesthetic that runs, carefully, through each object.

It is fresh, interesting and engaging. It is beautiful, generous and competent. It is a must-see.