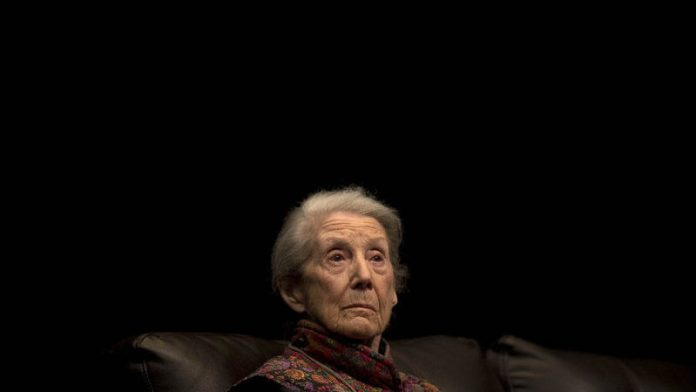 Nadine Gordimer has died peacefully in her sleep, her family said in a statement on Tuesday.

“She was 90 years old, will be lovingly remembered by her family, friends and literary colleagues,” the statement said. “Her son Hugo and daughter Oriane, and her caring helpers were with her.

Gordimer wrote 15 novels as well as several volumes of short stories, non-fiction and other works. She was published in 40 languages around the world.

“She cared most deeply about South Africa, its culture, its people, and its on-going struggle to realise its new democracy. Her proudest days were not only when she was awarded the Nobel Prize for Literature in 1991, but also when she testified at the Delmas Trial in 1986, to contribute to saving the lives of 22 ANC members, all of them accused of treason,” the statement said.

Gordimer was an unwavering critic of apartheid and an outspoken advocate of black majority rule. Her fiction, which she saw as part of the struggle against apartheid, documented the havoc that institutionalised racism wrought on private lives. Three of her works were banned by the government for varying periods because of their outspoken messages.

“She wrote as if censorship didn’t exist,” one critic posted on a South African website.

Gordimer was born in the mining town of Springs on November 20, 1923, the daughter of a Jewish immigrant father from Russia, Nan, and a mother, Isidore, from England.

Despite her father’s religious leanings, Gordimer was brought up a Christian and attended a Catholic convent school. Her father was a jeweller and the family was financially well-off.

After fainting a few times around the age of 11, Nadine’s mother withdrew her from school over fears of a weak heart. It was at this time that Nadine turned to books and writing as she seldom spent any time with her peers. She studied briefly at the University of the Witwatersrand before a short and unsuccessful marriage.

Although she never finished her degree at the University of Witwatersrand, Gordimer has lectured at a number of universities including Harvard and Princeton. Her distinguished literary career began in 1939 when, aged 15, she published her first short story in Forum magazine.

Lying Days, her first novel, appeared in 1953 and was followed by 12 more. She published over 200 short stories and numerous essays on literature and cultural politics – an output matched by only a handful of living writers.

A number of her novels have been translated into 30 other languages. Lying Days is seen by critics to represent the spirit of liberal humanism, and the idealistic hope of a multiracial future that existed in the 1950s in the early days of National Party rule.

As apartheid became entrenched, the idealism faded and The Late Bourgeois World (1969) reflected the slow death of these values. By the 1970s Gordimer had been studying the neo-colonial critiques of radical African theoreticians such as Frantz Fanon and Nkwame Nkrumah. She incorporated their ideas into a major statement about a future South African political and economic dispensation in A Guest of Honour.

Her 1979 Burger’s Daughter, based on the life of Afrikaner lawyer and convicted saboteur Bram Fischer was ranked by one critic as one of the “few truly great political novels ever written”.

Her 1992 collection of short stories, titled Jump, contained a clear message of how whites had become victims of the system they enforced. She repeatedly carried off the CNA prize for literature, and The Conservationist (1974), seen by many as her finest work, was awarded the Booker Prize.

But critics were not always unanimously enthusiastic about her work. Prof Stephen Gray once described some of her later writing as “impenetrable and undisciplined”, and said My Son’s Story (1990) should never have been published. She drew criticism for her “lack of attitude to feminism in favour of the race issue”.

In 1988 Gordimer caused a stir when, giving evidence in mitigation of sentence at the Delmas treason trial of United Democratic Front leaders, she told the judge she regarded Nelson Mandela and Oliver Tambo as her leaders.

She announced in 1990 that she had joined the ANC, and called for the continuation of economic sanctions against South Africa until it became a multiracial democracy. She was one of the first people Nelson Mandela chose to meet when he was released from Robben Island prison in 1990.

In 1991, at the age of 67, she won the Nobel Prize for Literature, the first woman to do so in 25 years. “It is remarkable how often Nadine Gordimer succeeds in her artistic intent to burn a hole through the page,” said Sture Allen of the Swedish Academy in his introduction at the presentation in Stockholm.

“Some people say I got the prize not for what I’ve written, but for my politics,” she said afterwards. “But I’m a writer. That’s the reason for me to be alive at all, as far as I’m concerned.”

Gordimer said she would use part of her R2.8 million prize money to support and encourage South African black authors through the Congress of South African Writers, which she helped found and of which she was a patron. In the same acceptance speech Gordimer paid tribute to the exiled Salman Rushdie saying “Salman Rushdie happens to be a brilliant writer, and the novel for which he is being pilloried, The Satanic Verses, is an innovative exploration of one of the most intense experiences of being in our era”.

Gordimer has 10 honorary doctorates in literature. She married Gerald Gavron (Gavronsky), a dentist, in 1949 but was divorced three years later. According to a number of sources, the couple had a daughter in 1949, Oriane Ophelia Gavronsky. Oriane has two children and lives in the south of France.

In 1954 Gordimer married Reinhold Cassirer, a highly respected art dealer who established the South African Sotheby’s and later ran his own gallery, the Cassirer’s Fine Art in Rosebank. They had one son, Hugo, in 1955.

Hugo, who now lives in New York, has collaborated with Gordimer on a number of television documentaries. Reinhold died of emphysema in 2001 at the age 93.

When interviewed by the Telegraph in 2003, Gordimer refused to talk about her husband or how the death had affected her, other than to say they had a “wonderful marriage”.

In October 2006, at the age of 82, Gordimer was attacked, robbed and locked in her Parktown home. She handed over cash and jewellery, but would not part with her wedding ring that her second husband Cassirer had given her. Unlike her writing peers, JM Coetzee and Andre Brink, Gordimer refused to emigrate from South Africa. – Sapa