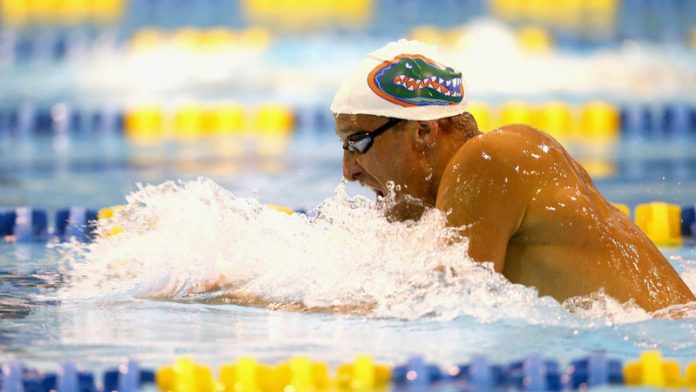 Leith Shankland brought South Africa’s participation in the swimming component of the Commonwealth Games to an apt finish on Tuesday, swimming his team to a bronze medal in the 4 x 100m men’s medley, the final swimming event at Glasgow’s Tollcross International Swimming Centre.

When Shankland and the rest of the relay team – Chad le Clos, Cameron van der Burgh and Sebastien Rousseau – climbed on to the podium, they took South Africa’s swimming medal tally at the games to an impressive 12.

In addition to his relay medal, Van der Burgh also picked up a gold in the men’s 50m breaststroke and a silver in the 100m breaststroke.

But it was Rousseau who emerged as the rising star from Glasgow, picking up four bronze medals. The 23-year-old finished in third place in both the 200m butterfly and the 400m individual medley, and was also part of the men’s 4 x 200m relay freestyle team that won a bronze medal.

He told Mail & Guardian that, although he was “pretty happy” with his performances, he had higher expectations. “I was hoping for a gold in the 400m individual medley,” he said. “I swam to win it and left everything in the pool. Unfortunately I came up a little short.”

Rousseau was the youngest member of the South African Olympics swimming team that competed in Beijing in 2008.

Honorary title
After he matriculated in 2009, he was offered a swimming scholarship by the University of Florida in the United States, where he is currently based. He has excelled on the collegiate swimming circuit there and has earned the honorary title of “All-American”, which is given to sportsmen and sportswomen who excel in that arena. He was the individual high points scorer at the US Open Championships last year, where he won four gold medals.

He said that he had prepared for Glasgow for more than a month. “I worked very hard for this. Since May, I have been working exclusively for this competition – about 24 hours of swimming each week.”

The hard work has paid off, and his performances at Glasgow will hopefully stand him in good stead to win a medal at the Rio Olympics in 2016.

“These are my first medals at a big meet, so it’s a definitely a big motivation,” he said. “Rio is my biggest focus, as I am done with college swimming now.”

Rousseau said he enjoys a close relationship with both Le Clos and Van der Burgh and is inspired by them. “They have both done amazing things for South Africa on the biggest stages.”

He felt that South Africa was becoming a swimming nation of note. “We are improving so much each year, and it is really exciting to see the up-and-coming youngsters doing so well in Glasgow.”

Elsewhere in Glasgow, Team South Africa continued to add to the medal collection from wrestling to long jump, but the most most celebrated victory was when the rugby sevens team inflicted a first Commonwealth Games defeat on New Zealand, winning the gold medal in front of 50 000 at Ibrox.

The South African Sports Confederation and Olympic Committee president, Gideon Sam, said: “The president of the Commonwealth Games Federation told me before the competition that sevens is the biggest medal to win. We targeted 15 golds here but this is the cherry on the top – this is the big prize.”

Paralympians Fanie van der Merwe and Charl du Toit also did South Africa proud, winning gold and silver respectively in the T37 sprint final on Monday. “What an awesome honour to compete here with my South African mates and in front of such a great crowd,” said Van der Merwe, who is a two-time Paralympian. “I had a great start but stumbled a little bit as I got close to the line. It was still an amazing experience, my first time at the Commonwealth Games.”