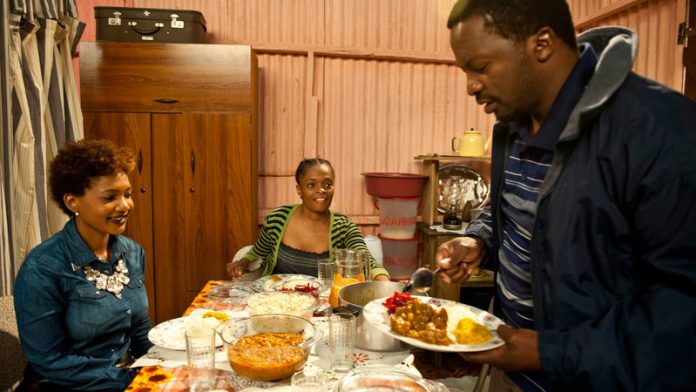 Isidingo, once known as one of the best shows on South African television is in its 16th year. It tells the story of the mineworkers, managers, residents and owners of Horizon Deep Gold Mine.

Over the years the storyline of the soap opera has moved away from the intricate and dramatic stories of the lives and struggles of the working class and opted to showcase more affluent families living in the small town.

The show has been besieged by rumours of low ratings, disagreements between cast members and production company Endemol and even industry utterances that it might be cancelled.

But it seems that the introduction of the Zondile family has brought some spark back to the show as Zukisa Zondile, played by Noluthando Meje, a domestic worker and her husband Sizwe Zondile (Jet Novuka) an unemployed mineworker, struggle to stay afloat.

Noluthando Meje, or Nolly as she is popularly known, has recently joined the cast of Isidingo and fast become one of its adored characters.

You are receiving a lot of positive feedback about how well you are portraying the role of Zukisa.
I am glad that the character that I portray isn’t one that would be predictable for the audience. It allows the viewers to see me in a different light. I have never had such a big role, so it is a blessing.

Your husband in the show is a mineworker. Has this influenced your thoughts on the ongoing strikes at mines?
We are telling this heartbreaking story while someone is actually going through that right now. It’s sad because we as actors have a different life to go home to when we are done shooting and they have nothing. It doesn’t go away for them. I used to run arts workshops for the children of mineworkers in Lonmin for Lonmin. On the last day one of the young girls said to me, ‘So you guys are just going to leave us here?’ and it broke my heart.

Your dad was also a mineworker, is that correct?
Yes and my mom is a domestic worker. It’s amazing how life plays out.

What are your childhood memories of having a dad as a mineworker?
Not much. My dad went from being a mineworker to a builder and he is now a retired caretaker. Now, I am reminded of what my dad went through everyday when I watch the caretaker in the security complex where I live. As kids my sister and I used to help our dad during school holidays. Now I feel like I want to help our caretaker when I see him because I grew up in that environment and it reminds me of my childhood and my dad.

What’s your favourite Isidingo storyline?
The story of Bra Zeb and Ma Agnes. Ma Agnes has been a consistently caring character throughout the years that loves her family and her husband.

I got to know you as one of the regular Idols contestants and then as a performing artist. When did you become interested in acting?
I have always liked acting. I started acting at the age of five and from then on I knew that this is what I wanted to do. It was all about timing and being at the right place at the right time. Music came afterwards. I knew that I wanted to be an actress and discovered along the way that I could actually be a great performer (laughs).

Was it a natural transition?
It was because I get to do both. What I love about acting is that it challenges you as an artist. In order for you to portray a role you need to tap into a different place within yourself, which also allows you to discover yourself more as a performer.

Why did you study PR if you always knew that you wanted to become a performing artist?
I wanted to know more about marketing and PR – an industry that I am extremely interested in. There are the Connie Ferguson’s of this world that have been in this industry for a very long time and have worked very hard to build their brands. They are fortunate to have brands invest in them and I always feel that you need to be very careful where you place yourself as an artist. Brands constantly approach you to be the face of their products. By the time I’m 36 and I look back then I have been the face of a long list of brands but then what has it done for my career? But if I have some sort of background and I know strategically what to align myself with it can only strengthen my career. And that knowledge has helped me.

When people Google your name, one of the top results is a story about you complaining about cash bars at events. What was that about?
I was so quiet last year when that story was published, no one knew what I was doing, and I wasn’t telling anyone that I was busy shooting a drama series. I read somewhere that some journalists will write whatever they need to write in order to reach the target that has been set for them for that month. I don’t understand how that is the only thing or the best thing that someone thought they could write about me. But I decided not to take these things to heart.

Are you prepared for when you could possibly become a Sunday tabloid favourite because you’re in our homes every day now?
I know that interest in my personal life is going to grow even more but I hope the focus stays on what I do onscreen.

You were tweeting about teaching? Tell me about that?
Yes, I teach presenting at On Cue Communications for the up-and-coming presenters that wants to steal my job … My competition! We have amazing presenters in South Africa but I just feel that the same group of people gets recycled. Then there’s this group of young people that wants to be presenters and the fact that they are doing something about it is amazing. I love teaching them.

Performers call out for pay rights