Transformative change is afoot among men and boys throughout Southern and East Africa. Millions have bravely stepped up to protect themselves and their partners from HIV. What started quietly in a few communities now spans nations, and could grow into one of the greatest achievements towards ending the Aids epidemic on our continent.

I am referring to voluntary medical male circumcision – a man’s choice to have his foreskin medically removed. It is a uniquely powerful tool in overcoming the spread of HIV, and is increasingly being embraced by millions.

We have known for several years now that choosing medical circumcision reduces a man’s risk of contracting HIV through heterosexual sex by approximately 60%, a finding established by scientists in South Africa, Kenya and Uganda through rigorous research. We also know that when a man chooses to be medically circumcised, partners and families also benefit because they are at decreased risk for the consequences of HIV. Medical male circumcision has provided us with a tremendous opportunity to save and improve lives.

Ensuring the safety of the procedure is vital. As we celebrate our achievements in helping more men to choose medical circumcision, we should not forget the dozens of young men in the Eastern Cape who tragically lost their lives during the past winter initiation season because of unsafe circumcision. Although rare, these deaths were entirely avoidable. Let us not forget, therefore, that male circumcision has benefits for individuals and communities only when performed safely.

If the vast majority of men in South Africa and neighbouring nations choose medical circumcision in the next few years, nearly one out of every four HIV infections expected to occur by 2025 would be prevented. Millions of people would be more likely to stay HIV-free, and resources for treatment and care could be invested in schools, roads and jobs.

Some worry that encouraging men to be medically circumcised could have an unfortunate side effect, that men would mistakenly feel 100% invulnerable to HIV and other sexually transmitted infections.

Although the concern is understandable, allow me to quell your fears by telling you that, in fact, a growing body of evidence suggests the opposite is true. For example, researchers in Kenya have found that men reduce risky behaviour after receiving medical circumcision. Choosing protection from HIV empowers them to make other wise decisions.

Governments should take responsibility
Our men and boys are taking responsibility for preventing the spread of HIV, and our leaders need to do the same. Governments across the region should prioritise this critical health programme, as South Africa has done and hopefully will continue to do. Any man who wants to receive medical circumcision to prevent HIV should be able to access it from a trained health provider.

I am deeply concerned, however, by recent estimates that only half the funding needed to provide medical circumcision at nearly universal levels across Southern and East Africa is available. We know that our national budgets are stretched to their limits, but we owe it to our people to save their lives. Ending Aids is an investment and will ultimately pay for itself many times over in the future.

Financial resources are only part of what is needed. Community and religious leaders have a vital role to play in inspiring men to be accountable for their health and that of others in their lives. A man’s decision to become medically circumcised rightfully reflects deeply held values, beliefs and other motivations. It should also reflect accurate, science-based information about HIV prevention.

The health of Africa is at stake. As many warned at the International Aids Conference in Melbourne, Australia, in July, HIV continues to claim lives because we allow it to. There is much we can do right now, including treating and caring for those who are sick, searching for a vaccine and using condoms – and expanding access to voluntary medical male circumcision.

As more men take responsibility for their health and wellbeing, our leaders must not let them down. We have made tremendous progress toward ending Aids, considering where we started. But we aren’t out of the woods yet – Aids is still upon us.

Medical male circumcision is a powerful, safe and affordable way to protect current and future generations from HIV. The responsible choice is clear to those who are willing to step up. 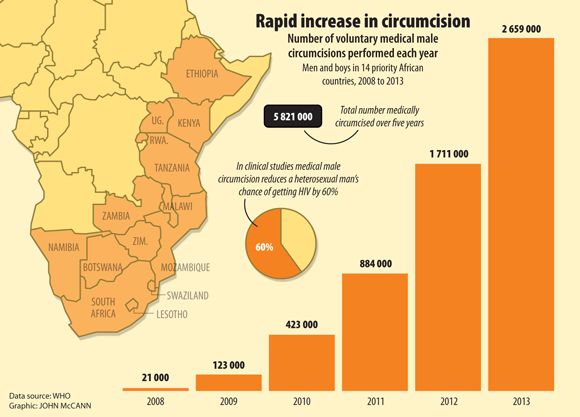 Festus Gontebanye Mogae is the former president of Botswana. He is a member of Champions for an Aids-Free Generation