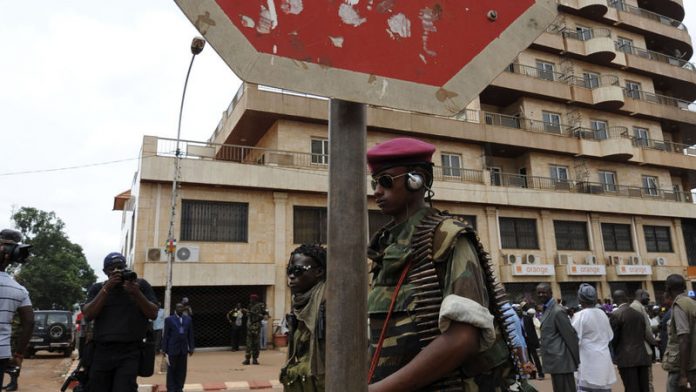 The armed Seleka coalition that last year seized power in the Central African Republic for 10 months wants no part of a new government, a spokesperson for the former rebels said on Monday.

The announcement by the mainly ex-rebels in the troubled Christian majority nation came a day after transitional President Catherine Samba Panza appointed a Muslim to lead a new broad-based government.

“We think the transitional president didn’t take account of the views of the Seleka, which still controls the major part of the country,” Seleka spokesperson Abou Mal Mal Hissene told Agence France-Presse. “The Seleka will not participate in the next government,” he said, adding that the fragmented coalition of former rebels only learned of the appointment of a new prime minister “by way of foreign media”.

Samba Panza, who took office in January after Seleka leader Michel Djotodia stepped down under intense regional pressure, on Sunday named Mahamat Kamoun to work to end the chaos and oversee a democratic transition.

Atrocities against civilians
Kamoun is the first Muslim since independence from France in 1960 to hold high office in the deeply poor landlocked nation. Around 80% of the population are Christian, while 15% practice Islam and the remainder are animist, according to a US State Department survey in 2010.

Though Seleka fighters are mostly Muslim, the coalition’s “military leaders do not for the most part approve of the appointment of Mahamat Kamoun, whom they don’t consider to be a member of Seleka,” another re-rebel said.

However, the financial expert previously served as chief Cabinet secretary under Djotodia, and was also director general of the state treasury in the regime of Francois Bozize, the former general who ruled for 10 years before being overthrown by Seleka.

Djotodia was forced out largely because he failed to prevent Seleka forces from carrying out atrocities against civilians in the capital Bangui and elsewhere. Their actions led to the formation of “anti-balaka” (anti-machete) vigilante units to protect largely Christian communities. But the anti-balaka militias also committed serious crimes against humanity, according to rights groups.

Some 2 000 French peacekeeping troops were deployed alongside an African Union military force of around 6 000 men from December last year. They weakened the Seleka stranglehold on parts of Bangui and the rebel coalition fell back to the north, which they still control. Kamoun’s appointment came almost a fortnight after warring parties signed a fragile ceasefire in Gabon’s capital Libreville, but several Seleka leaders refuse to be bound by the accord.

Samba Panza seized on the peace deal to announce the formation of a broad-based government. When asked about the Seleka’s refusal to join, the president’s spokesman Clement Anicet Guiyama Masogo said that she had “received almost every national body during successive consultations” between August 6 and 8.

The interim leader had sought possible names for the post of prime minister, but, the spokesperson said, “of the 12 bodies that were received, nine made suggestions. The ex-Seleka proposed nothing”. – AFP