No place for Young Turks in Zanu-PF 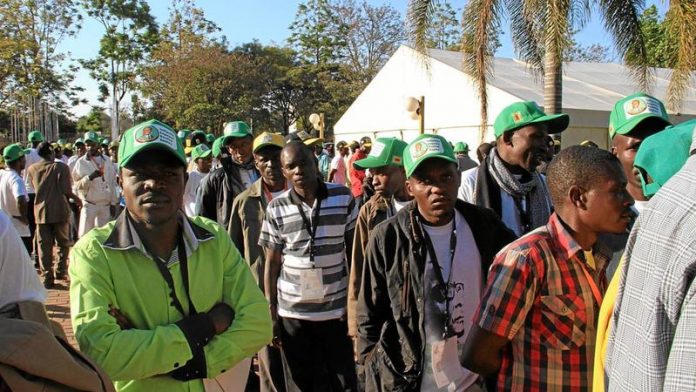 Zanu-PF’s youth league voted in new leaders in a hotly contested all-night election last weekend, but none of them has any clout in a party that still frowns on the youth.

After a controversial poll, the results were announced just before dawn on Sunday morning, and Kudzai Chipanga emerged as the new deputy secretary, the most senior post he could aim for – the top post, the secretary for youth affairs, is held by party veteran Absolom Sikhosana (60), who has vowed he is “not going anywhere”.

Other than being just another piece of turf for senior party figures to fight over, there is little else that the youth league is good for, because Zanu-PF leaders say they cannot trust their younger members with leadership.

According to Sikhosana, youth league members cannot be left to decide for themselves. They need an older person to guide them.

“Do you want us, the elders, to step aside for inexperienced people, who will be fooled by the machinations of the West?” Sikhosana said.

“The West is using young people to fight against older revolutionaries,” he told reporters this week, and “they cannot be trusted with leadership on their own”.

Perhaps referring to former ANC Youth League leader Julius Malema and his falling out with the ANC, Sikhosana said: “We have seen problems elsewhere in the region, where youths were left to lead themselves.”

He said he was aware of calls from within the party for him to step aside but declared: “We are not going anywhere.”

The league can elect members to other posts but President Robert Mugabe repeatedly appoints Sikhosana to watch over them.

Senior leaders a concern
Even during the election itself, Zanu-PF bigwigs could not trust their young members to vote correctly – losing candidates complained that people older than the 35-year age limit for youth wing membership had been allowed to vote.

“It was very unfortunate that senior leaders had an interest,” said Lewis Matutu, who withdrew his candidacy just hours before the poll.

Tongai Kasukuwere, who lost the contest to Chipanga, said he accepted the results, although he was “concerned that some of the voters who are well over 50 were allowed to vote”.

After the election, Mugabe, who berated senior party leaders for buying off youth league members to gain their support, said the wing was the party’s future.

“There should be co-operation, good co-operation, between the youth league and the elders of the party,” said Mugabe, who at 90 is one of the world’s oldest leaders. Although Zanu-PF attracts some young members into its ranks, they know they have to curtail their ambitions.

“We support President Mugabe 100% but we think there should be more representation of the youth in the senior positions. How else can we learn the ways of the party if we are kept outside? How else can the party prepare for the future?” Margaret Sangarwe, a 27-year-old accountant who has been a member of the youth league for five years, said this week.

But Sikhosana insists that the youths need him.

“We, the elders, have to be there; inexperienced people cannot be left to take over the party. It causes all sorts of problems,” he said.

Last year, Zanu-PF attracted larger numbers of young candidates than usual to stand on its ticket in the elections, some of whom ousted party veterans in the primaries.

Zanu-PF’s suspicions
“Zanu-PF is a political party for both the young and the old, and it is a party that has bridged the generational gap well. All age groups are represented in Zanu-PF,” one of the candidates, Varaidzo Mupunga (26), told the Mail & Guardian during campaigning last year.

This week, she was elected secretary for administration of the youth wing.

But, with the Zanu-PF old guard growing increasingly suspicious of these “Young Turks” and taking deliberate steps to bar their way up the ladder, it may take a while before she and others of her age gain any real voice in the party.

Last year, the Zanu-PF secretary for administration, Didymus Mutasa, one of the party’s top six leaders, brushed aside the ambitions of its younger members. “What Young Turks? They should go to Turkey,” he said.

Meanwhile, Zanu-PF has introduced new regulations that will make it even harder for younger, newer members of the party to rise up quickly through the party’s ranks.

Members will need at least 15 years in a leadership position before they can be voted into the party’s central committee, one of its most important councils.