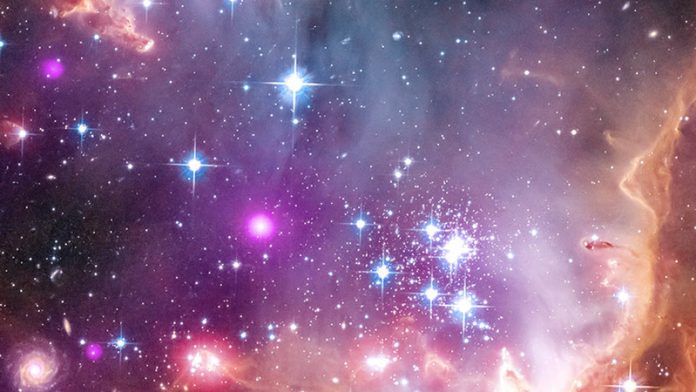 In the Universe we find enormous clouds of gas and dust, called nebulae, between the stars. We want to know how much of each chemical element is present in these nebulae, because it tells us a lot about a specific nebula and also guides our ideas of how stars, galaxies and the entire Universe evolve.

One piece of the puzzle is a specific class of nebula that is heated up by nearby stars in such a way that it generates its own light. This process results in spectacular huge glowing structures known as photoionised nebulae.

Although they are gigantic, ranging from one to a few hundred lightyears in size, the physical process that causes these nebulae to emit their own light (rather than merely reflect light from nearby stars) occurs at the atomic level. It is the same process that makes familiar florescent lights shine here on Earth.

The light we observe from these gas clouds tells us about the physical conditions in the nebula — what is really going on there. Light has many different properties and it is the role of an astronomer to distil meaningful information from this data. One physical quantity that we can derive from the light is the chemical composition of a photoionised nebula. We have two different but well established methods to measure this, but we get very different answers from the two techniques. Clearly, we are missing something.

The science that studies physics at the atomic level (where we’re dealing with protons, electrons, atoms and ions) is called quantum mechanics, and it governs the behaviour of particles in nebulae. Quantum mechanics follows rules that are different from the physics we see in our macroscopic world.

Specifically, we are used to change happening gradually — to get from the first to the fifth floor in a building, we have to climb all the steps in between. In the atomic world, particles can only be in specific states: they can be on the first floor or the fifth floor, but nowhere in-between.

In the same way, electrons in atoms can only have specific energy values. If they move from one energy state to another (the first floor to the fifth floor) and their overall energy changes, they will either emit or absorb a photon (light particle) so that the energy of the system is conserved.

The frequency of the photon that is absorbed or emitted will be related to the difference in energy between the states (in our example, the difference between the energy on the first floor and the energy on the fifth floor). If a particular transition happens often, we will observe lots of photons at a specific frequency and measure a bright signal at that particular frequency when we analyse the light emitted by the nebula.

These features in the light from an object are known as spectral emission lines. The atoms and ions of each element have a unique set of energy levels, which means that the pattern of the emission lines from a nebula are like fingerprints of the different chemicals in the gas.

There are different physical mechanisms that make electrons move from one energy level to another. Two predominant types of emission lines that we see from photoionised nebulae are “recombination lines” and “forbidden lines”.

Both can be used to determine the elemental abundances (the term for the types and amount of chemicals in the gas that forms the nebula) in nebulae.

Forbidden lines were named by physicists who could predict mathematically that such energy transitions (and thus the emission of electrons at particular frequencies) were possible, but they could not be observed in laboratories.

Essentially, astronomers saw what would later be called forbidden lines from nebulae, but it took them a while for them to realise what they were seeing. At first they thought that they had discovered a new element, which they called nebulium, since you could only observe it from nebulae. They did not realise that the conditions in space, which are very different from those on Earth, could make these transitions very probable.

Recombination lines were known about and well studied before forbidden lines were observed (and identified) from space.

Scientists are confident that they understand how both these types of spectral lines form. Importantly, either recombination or forbidden lines can be used to determine the chemical composition of elements in a cosmic gas.

But here is the puzzling part: when both of these methods are used to determine the relative abundances of the same cloud of gas, they consistently give different answers. Which one, if either, is correct and where are we going wrong?

This discrepancy has puzzled astronomers for more than four decades because everyone agrees that it is not a result of careless measurements or incorrect calculations. One possible explanation is that something is happening in nebulae that we are not aware of: perhaps there are significant variations in the density of the gas from one location to the next; or maybe different elements in the nebula are not as well mixed as our current theories of nebular evolution indicate. Some of these ideas have not been disproved yet, but none has been widely accepted either.

But what if we are interpreting the data incorrectly because our understanding of the physics that occurs in nebulae is wrong? Perhaps there is some physical phenomenon that becomes important under the extreme conditions in nebulae. What if nebulae are the only place in the Universe where it manifests? We have overlooked it until now, in the same way as scientists did not think forbidden lines could form, simply because it has never been observed on Earth.

We have made great leaps in our understanding of the Universe, but it seems as though no matter how many pieces of the puzzle we fit together, there are always more questions.

Andri Prozesky is a PhD candidate at the University of South Africa.