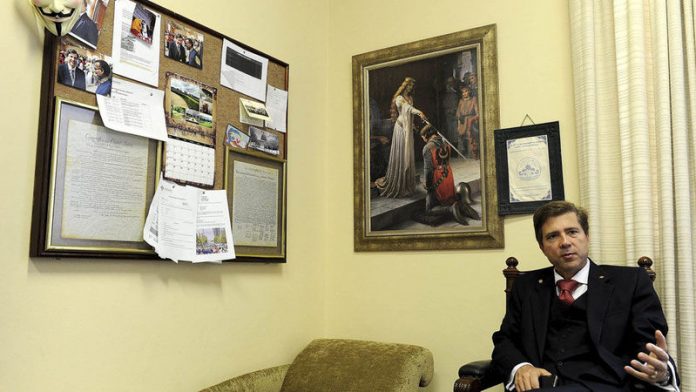 Tributes have continued to flow in remembrance of Inkatha Freedom Party MP Mario Oriani-Ambrosini who passed away on Saturday after battling terminal lung cancer at the age of 53.

“Dr Ambrosini will be remembered as an astute jurist and we were still looking forward to his continued contribution in the country’s intellectual discourse on our Constitution – for which he was a gracious but vociferous ambassador, nationally and internationally,” the statement read.

“Despite his ill-health, he remained steadfast in his convictions as a human rights activist of note. Indeed, our country is all the poorer at his passing and it is my hope that his life’s work will continue to inspire our youth and instil in them the kind of constitutional activism that characterised Dr Ambrosini’s life.”

“Dr Ambrosini succumbed to his well documented fight against cancer, leaving behind a legacy of courageous determination in the face of adversity,” ANC spokesperson Zizi Kodwa said in a statement.

“Although we did not always agree with his political views, we held him in high regard for his constitutional expertise, remarkable experience on governance matters and for the contribution he made to our democratic transition process as an advisor to IFP leader Prince Mangosuthu Buthelezi,” Sizani said in a statement.

“He was a fierce and outspoken debater, a seasoned negotiator, a principled legislator and a passionate politician.”

The DA’s Wilmot James, who was known to be close to Ambrosini, paid tribute, saying: “We have lost a great man in Mario Ambrosini.”

“He was a fighter for human rights and democracy, a person of integrity, who understood and advanced our cause, and a powerful friend.”

James said Ambrosini would be remembered for his “unparalleled” contribution to Parliament and the defence of our freedom and the Constitution.

“From immigration law to refugee protection law, from electoral reform and the fight against the Secrecy Bill to his landmark case in Ambrosini vs the Speaker of the National Assembly, Mario has made South Africa, and our young democracy, better.

“We should honour his name and his courage by making sure that every one of us does the same,” said James.

Courageous battle
Ambrosini had been publicly battling lung cancer since early 2013. His family released a statement saying Ambrosini died “in the early hours of Saturday morning” after a long and courageous battle with terminal lung cancer.

“Mario fought many battles throughout his life but this was no doubt his toughest.

“Nonetheless, he continued to fight, not only for his own sake, but on behalf of the countless people who face this same battle,” said the family.

It said that Ambrosini had always been in total command of his life. “Since day one when diagnosed with terminal cancer without any previous symptoms, he decided on his course of treatment and adjusted it according to his own research, studies and experimentations. He remained true to his own character, right up to the end.”

Different treatment
He revealed in a press statement in May 2013 that he had chosen to pursue a course of treatment based on different science, not on an alternative to science.

Ambrosini revealed that he was diagnosed suddenly and without significant prior symptoms in April 2013 with stage four lung cancer, which had extensively “metastasised throughout my pleura”.

“The condition is terminal and not operable, and, if left untreated, will cause me to be removed from all lists for Christmas functions or gifts,” he joked.

But Ambrosini wouldn’t undergo chemotherapy, saying that it would only buy him a few more months of life with severe side effects.

In a press statement issued in May 2013, Ambrosini wrote: “I count on achieving a cure in three months and will then return to my parliamentary work. If my gamble is successful, I plan to dedicate a great portion of my future political and professional life on the fight to eradicate cancer as a cause of death. If I fail, I hope that what I tried to do for democracy in South Africa and elsewhere will be appreciated.”

Medical marijuana
Ambrosini appealed to Zuma and the government to decriminalise marijuana for medical purposes in February 2014, during a debate on President Jacob Zuma’s State of the Nation address.

Ambrosini later tabled a private member’s Bill, the Medical Innovation Bill, which sought to allow doctors to administer innovative unproven, but harmless, cancer treatments in cases where other treatments cannot provide a cure and on the basis of the patient’s informed consensus, thereby shielding doctors from common law liability and medical profession requirements.

The Bill would allow the minister of health to authorise, establish and resource one or more pilot, innovative cancer treatment centres where doctors would be allowed to act in terms of the above. It also called for the government to decriminalise and liberalise cannabis for medical treatment and industrial use.

Responding to Ambrosini’s plea, Zuma said: “I was touched to see the man I have known and worked with for more than 20 years in this condition. I have asked the minister of health to look into this matter.”

“Through the introduction of his Medical Innovation Bill, he was fighting for the right of individuals to make decisions over their own body and their own lives,” said his family.

‘Greater good’
“Everyone who knew Mario, knows that he spent his life pushing the limits but always for the greater good. This is what made him the remarkable warrior that he was.

“He will be remembered though not only as a warrior, but as a caring husband and a loving father, completely dedicated to his son, Luke,” read their statement.

Ambrosini was a long-time adviser to IFP leader Prince Mangosuthu Buthelezi – starting from the days of the Codesa negotiations and following him to the department of home affairs when Buthelezi was appointed as minister in 1994.

Ambrosini, one of the drafters of the South African Constitution, was elected to Parliament in May 2009.

The rules prohibited an MP from introducing a Bill in Parliament unless he or she has first received permission to do so from the majority of the National Assembly.

Fight for rights
Ambrosini approached the Cape Town high court, challenging the constitutionality of parliamentary rules regarding the introduction of private member’s bills.

He lost the case but appealed to the Constitutional Court, which ruled in his favour in 2012.

This opened the way for individual MPs from any political party to table proposed legislation in Parliament, under what they call the Ambrosini rule.

Funeral arrangements will be announced in due course, according to his family. – Additional reporting by Sapa