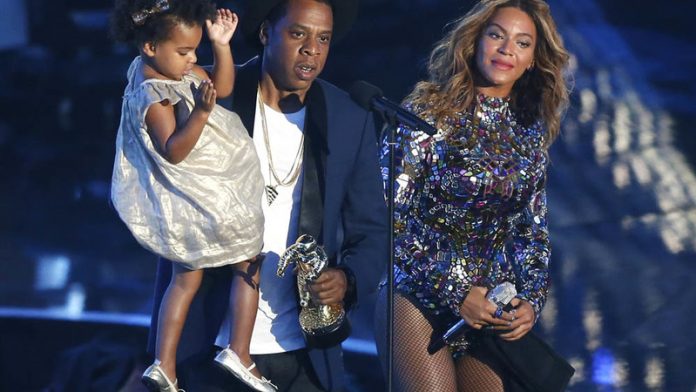 With some twerking and shaking, the leading ladies of pop music dominated the MTV Video Music awards on Sunday, while an emotional Miley Cyrus and a touching moment between Beyoncé and her family led the Moonman award wins of the night.

Cyrus, who set tongues wagging last year with her raunchy dancing during her VMAs performance, won the night’s top prize for video of the year for Wrecking Ball, in which she cavorted naked on a wrecking ball.

Earlier on the red carpet, Cyrus said she “retired” her grinding explicit dance moves. But while Cyrus has retired the twerk, rapper Nicki Minaj brought her moves to kick off the show with hip hop song Anaconda.

This year’s awards took place at the Forum in Inglewood, California.

Meanwhile, in the closing performance for the evening, Beyoncé took viewers on an emotional journey for almost 20 minutes, with verses from almost her entire latest album. She ended her performance accepting the Michael Jackson Video Vanguard Award from her husband Jay Z who called her “the best living entertainer”.

“I’m so full, I have nothing to say,” she said, all choked up. “I’m filled with so much gratitude, I just thank God for this moment. I love ya’ll so much. Blue-Blue I love you, my beloved I love you,” she told Jay Z and her daughter Blue Ivy while accepting the lifetime achievement award.

Since launching in 1984, Viacom-owned MTV’s VMAs have become synonymous with irreverence and unscripted moments that have become part of music history, and all eyes were on whoever delivered the most outrageous or unplanned stunt.

In stark comparison to the over-the-top performances by the ladies of pop on the VMAs stage, British newcomer Sam Smith used a bare set to showcase his voice on his hit Stay With Me, while rockers Maroon 5 performed Maps outside of the newly renovated Forum theatre in Inglewood, with hundreds of fans.